Background: AML is a disease affecting predominantly older patients (pts), but does occur across the entire age spectrum; younger adults [age <60 years (y)] have better outcomes. Using 2 large datasets (from Germany and the US), we sought to identify whether mutational frequencies, cytogenetic aberrations or outcome measures would demonstrate unique patterns to independently assort populations by age.

Methods: We analyzed the molecular profiles of 2,823 adult AML pts enrolled onto clinical frontline protocols of 2 large cooperative study groups from 2 continents [US, Cancer and Leukemia Group B (CALGB)/Alliance for Clinical Trials in Oncology (Alliance), n=1743; Germany, AML Cooperative Group [AMLCG], n=1080] between 1986 and 2016. Treatment of all pts included intensive induction therapy, whereas pts enrolled on CALGB/Alliance protocols precluded allogeneic transplantation in 1st complete remission. Pts in both cohorts were profiled for molecular features via targeted sequencing platforms. Frequencies of mutations genes and selected cytogenetic findings were then calculated in both datasets for the group of pts aged 18-24 y and for older pts by 5-year intervals until the age of 74 y and for pts older than 75 y. We also analyzed survival outcomes of 1,669 AML pts younger than 60 y using the same age intervals up to age 59 y.

Results: Our side-by-side analysis shows remarkable congruence of results between German and US pt populations. Selected AML-associated gene mutations (mutation frequency ≥4%) and recurrent cytogenetic abnormalities followed 3 basic distribution patterns across the age spectrum (Fig. 1A): group 1 with increasing frequency with increasing age [ASXL1, BCOR, IDH1/2, RUNX1, SRSF2, TET2, TP53; complex karyotype and cytogenetically normal AML (CN-AML)]; group 2 with decreasing frequency with increasing age (CEBPA, EZH2, FLT3-TKD, GATA2, KIT, KRAS, PTPN11, NRAS, WT1; inv(16), t(8;21) and 11q23/KMT2A rearrangements) and group 3 with non-linear frequency distribution, which included the 3 most common AML-associated gene mutations (NPM1, DNMT3A, FLT3-ITD), SF3B1 and mutations in the cohesin complex genes (RAD21, SMC1A, SMC3, STAG2) (Fig. 1A). Notably, within the first 2 distribution groups, there seem to be no obvious age that could serve as a cut point separating age groups that are markedly different with regard to their molecular patterns. Particularly, this includes an age group that is commonly used for pt cohort definitions such as pts aged 18-39 y referred to as adolescent and young adults (AYA) or even treatment decisions and eligibility (eg, ages 60 or 65 and older for consideration as elderly AML).

With respect to pt outcomes, expectedly, there was almost linear shortening of overall survival (OS) as age increased (p<.001; Fig. 1B, Table 1). Within the European LeukemiaNet (ELN) genetic-risk groups, there was also an age-associated shortening in OS rates (Table 1): in favorable and intermediate risk pts the 5y-OS declined over the age range (favorable risk pts; US, p=.002; GER, p<.001; intermediate risk pts, US, p<.001; GER, p=.009, Table 1). Adverse risk pts had less variability in survival outcome across age (US, p=.004; GER, p=.22). Thus, while ELN criteria risk stratifies each age group, age itself is an important qualifier with regards to OS within each ELN group given the wide survival range among the age group. Again, there were no distinct outcome changes at certain age groups, further supporting the consideration of age as a continuum in AML for both biology and risk stratification.

Conclusions: To our knowledge, this is the first large scale depiction of mutational patterns in AML inclusive of the entire adult age spectrum. Our international study demonstrates that patterns of individual mutations based on age are remarkably consistent between countries, and defy assortment based on typical age conventions. Given the continuous distribution of either increasing or decreasing frequency of many mutations, there are distinctly different mutational profiles for the youngest pts compared with older pts, however choosing a precise cut-off, such as age 39 for AYA pts or 59 for consideration as “younger AML”, does not seem to be supported by our analyses. This observation supports a more personalized approach that also considers molecular subgroups in clinical practice instead of the age rigidity set in many clinical trials. 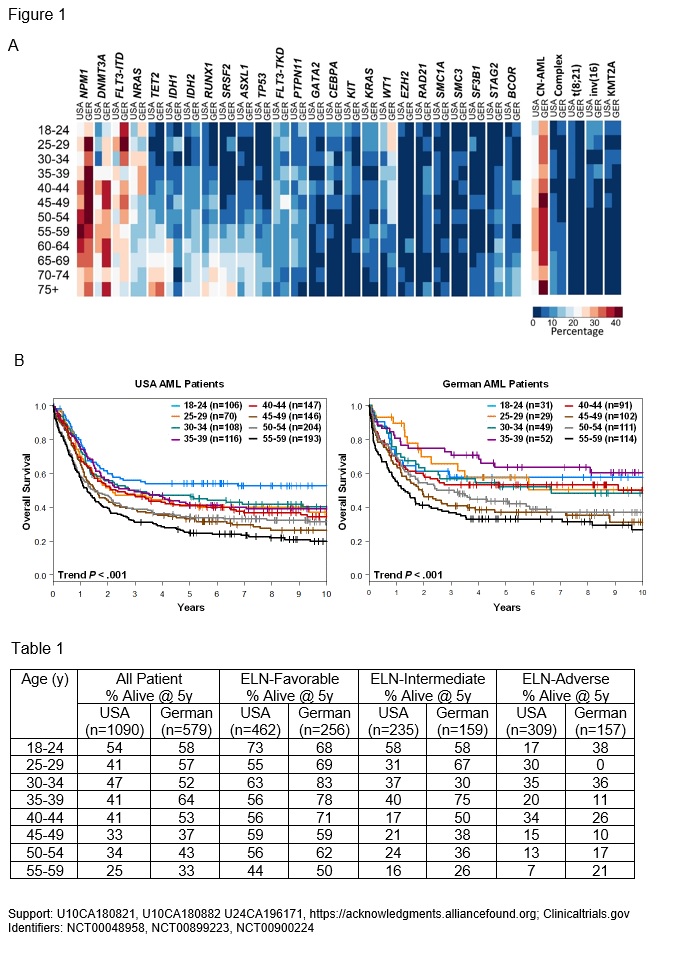