Single-cell analysis is of significant importance in delineate the exact phylogeny of subclonal population and in discovering subtle diversification. So far studies of intratumor heterogeneity and clonal evolution in multiple myeloma (MM) were largely focused at the bulk tumor population level.

Here, we performed quantitative multi-gene fluorescence in situ hybridization (QM-FISH) in 129 longitudinal samples of 57 MM patients. All the patients had newly-diagnosed and relapsed paired samples. An expanded cohort of 188 MM patients underwent conventional FISH (cFISH) to validate the cytogenetic evolution in bulk tumor level. 43 of 57 patients (75.4%) harbored three or four cytogenetic clones at diagnosis. We delineated the phylogeny of subclonal tumor population and derived the evolutionary architecture in each patient.13q deletion and the first 1q gain tended to be earlier cytogenetic alternation, whereas 16q and 17p deletion were acquired later. Patients with clonal stabilization had a significantly improved OS than those with other evolutionary patterns (median OS, 71.2 vs. 39.7 vs. 35.2 vs. 25.5 months, for stable, differential, branching and linear patterns, respectively, p=0.001). Besides, a high degree of consistency and complementarity across QM-FISH and cFISH was observed in evaluation of cytogenetic evolution pattern in MM. In total, at least two time-point cytogenetic evaluations by cFISH were underwent in 188 MM patients. The proportion of patients with high-risk cytogenetic features was 33% at diagnosis and 49% at relapse. The prognostic value of the presence of high-risk aberrations at diagnosis were attenuated over time (HR=1.79, p=0.002 for survival from diagnosis; HR=1.55, p=0.026 for survival from relapse, ). Survival from relapse were greater influenced by the presence of high-risk aberrations at relapse (HR=2.07, figure 5E) rather than present at diagnosis (HR=1.55).

The present study investigated the prognostic value of evolution in copy number or clone size of 1q21 gain/amplification during follow-up. The incidence of patients carrying at least three copies of 1q21 was higher after relapse than at diagnosis (69% vs. 55%, p=0.004).Patients were categorized as six groups according to the change patterns in copy number and clone size of 1q21 gain between the two time-point samplings. Patients without 1q21 gain/amplification at both time points (group B) and patients who had obvious decrease in clone size or loss of 1q21 gain at relapse (group A) experienced similar superior outcome (Failure free survival after relapse (2nd FFS), 18.1 vs. 27.8 months, p=0.469), whereas patients carrying 1q21 gain/amplification at both time points with or without increase (group C,D) in clone size relatively worse survival (2nd FFS 12.4 and 10.5 months, respectively, p<0.05 compare to group A and B). The remaining patients who had an increase in copy number of 1q21 and those who developed de novo 1q21 gain at relapse were observed poorest outcome (group E and F,2nd FFS 6.7 and 8.9 months). The interval time between two time-point samplings were similar among groups, whereas the different evolution pattern of 1q21 gain could clearly stratify both overall survival and post-relapse survival (p<0.001).

This study shows that QM-FISH is a valuable tool to elucidate the clonal architecture at single cell level. Clonal evolution pattern is of prognostic significance, highlighting the need for repeated cytogenetic evaluation in relapsed MM. 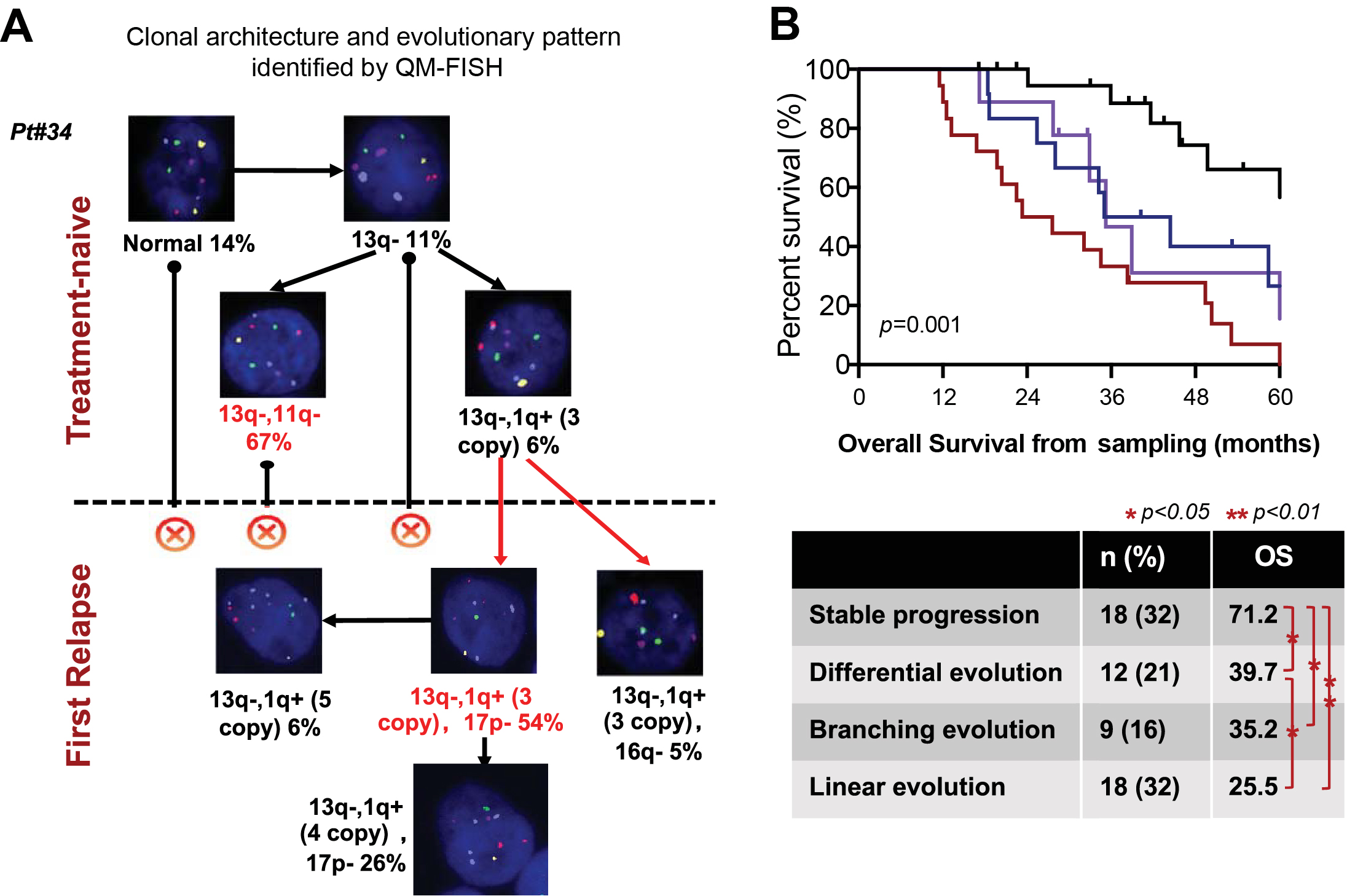