Introduction: Systemic light chain (AL) amyloidosis is a rare progressive and debilitating disease which is caused by the abnormal production of amyloidogenic free light chains by a plasma cell clone. Substantial heterogeneity in clinical presentation of AL leads to difficulties in the early and correct diagnosis, as well as special challenges in management. Until recently there were no regulatory approved therapies. The approach to the diagnosis and management of the disease was derived from single referral center studies. EMN23 is a retrospective, multicenter study supported by the European Myeloma Network, aiming to describe the patterns of real-world AL amyloidosis management in Europe.

Methods: EMN23 completed the enrolment of 4480 patients in 13 Sites and 10 countries across Europe: Austria, Czech Republic, Germany, France, Greece, Italy, the Netherlands, Portugal, Spain, and the United Kingdom. Enrolled patients had initiated treatment between 2004 and 2018, and study outcomes were analyzed in 2 time periods, 2004-2010 (pre-2010), and 2011-2018 (post-2010), with 2010 being the approximate timepoint when the combination of cyclophosphamide, bortezomib, and dexamethasone was introduced in clinical practice. This report focuses on the efficacy outcomes with respect to the cardiac stage at diagnosis, first-line treatment, and period of first-line initiation.

Results: In total, 4480 patients started treatment between 2004 and 2018; 1415 patients pre-2010, and 3065 patients post-2010. Overall, 31% of the patients were below 60 years, 16% between 60 and 64, 37% between 65 and 74, and 16% over 75 years, with <5% difference in all age groups between the 2 periods. Patients at stage I, II, IIIa, and IIIb between 2004 and 2018 were 16%, 32%, 22%, and 15%, respectively, whereas cardiac stage was not reported for 16%. Cardiac, renal, and soft tissue involvement were the most common throughout the entire study period, at 68%, 66%, and 18% respectively. Patterns of organ involvement did not change over time (<5% difference for all organs), and about one fifth of the patients had 3 or more organs involved at diagnosis. Chemotherapy-based (chemo) and immunomodulatory-based (IMiD) regimens were the most common first-line treatments administered pre-2010, for 43% and 30% of the patients, respectively. Most patients who received chemo or IMiDs at first line pre-2010 and did not achieve a hematologic response (SD or PD), continued with IMiDs (46%) and bortezomib-based (bor-based) regimens (57%) at second line, respectively. Bor-based regimens were dominant in the post-2010 era, administered to 75% of the patients. Fifty-three percent of patients non-responsive to bor-based regimens at first line post-2010 proceeded with IMIDs at second line. The proportion of patients who received ASCT was 8% pre-2010, and 6% post-2010. Overall response rate (hematologic response ≥PR) at first line for patients who started treatment in 2004-2018, was highest for ASCT (81%), followed by bor-based (54%) and chemo (41%), while the non-responders (SD, PD, or death within 3 months from treatment initiation) for the same regimen groups were 13%, 33%, and 44%, respectively. Deeper hematologic responses at 3 months from first-line initiation correlated with better overall survival (p<0.0001); the median OS for no response, PR, VGPR, and CR were 21, 62, 83, and 109 months, respectively. For stage IIIb patients in particular, early response to treatment was critical, as hematologic responses at 3 months were associated with better survival outcomes: median OS was 3, 19, 36, and 47 months for patients with no response, PR, VGPR, and CR, respectively (n=342, p<0.0001). OS was improved in the most recent era for patients of stages II (p=0.054) and IIIa (p=0.017), but not for patients at stages I (p=0.670) and IIIb (p=0.531). Median survival of stage IIIb patients was 5 months for bor-based, chemo, or IMiD regimens.

Conclusions: This is the largest real-world study for AL amyloidosis that provides insights into the management and outcomes of these patients. After 2010 a transition to bor-based therapies was observed, together with an improvement in OS in patients with stage II and IIIa disease but with no improvement for stage IIIb patients, regardless of the first-line regimen used. Deeper hematologic responses at 3 months from first-line initiation significantly improved overall survival, even among high-risk stage IIIb patients. 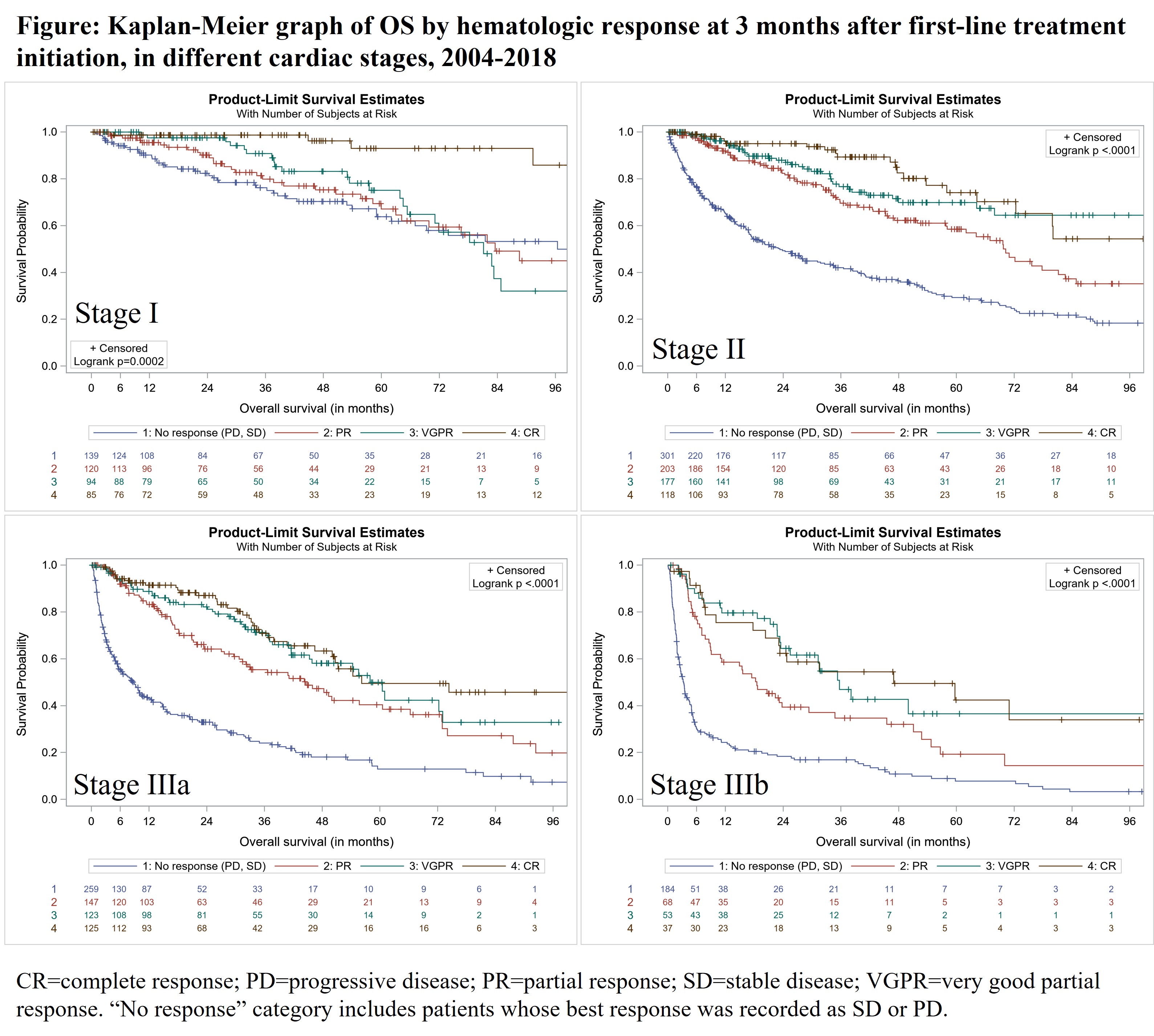 OffLabel Disclosure: This is a retrospective study on AL amyloidosis, and until recently there were no regulatory-approved treatments for the disease.

See more of: 652. Multiple Myeloma and Plasma cell Dyscrasias: Clinical and Epidemiological: Monoclonal Gammopathies of Determined Significance: What We Have and What We Want
See more of: Oral and Poster Abstracts
<< Previous Abstract | Next Abstract >>
*signifies non-member of ASH