Methods: Our first-in-human, single-center, phase 1 study (NCT04014894) was designed to evaluate the safety and efficacy of ET019003-T cells in patients with CD19+ malignancies, of whom 8 with RR DLBCL are reported here. Eligible patients must have (1) histologically confirmed DLBCL; (2) CD19+ on malignant cells by IHC; (3) refractory disease as defined in the SCHOLAR-1 study, or recurrent disease within 6 months or at least 2 times after CR; (4) prior therapy including an anti-CD20 monoclonal antibody and an anthracycline. Patients with CNS lymphoma were eligible. Bridging therapy wasn’t allowed after apheresis. Cyclophosphamide 250 mg/m2 on day -5 and fludarabine 25 mg/m2 on day -5 to -3 were used as the conditioning regimen. Planned dose levels were 2, 4x106 TCR+T cells/kg, and repeated infusions were allowed. Primary objectives were incidence of adverse events (AEs) and overall response rate(ORR). CRS and neurotoxicity were graded using the ASTCT criteria, and other AEs using CTCAE v5.0. Response was assessed per Lugano Criteria (Cheson 2014).

3 pts (37.5%) experienced grade 1 CRS that resolved spontaneously; 1(pt2) developed grade 3 neurotoxicity (dose-limiting toxicity), manifested by confusion, barylalia, tremor and agitation, which occurred after CRS and responded to corticosteroids. The most common AE was neutropenia (100%), and 62.5% were related to conditioning regimen; other hematologic AEs included thrombocytopenia (37.5%) and anemia (12.5%). Pt8 had pulmonary infection on day 15, and pt1 experienced viral encephalitis at 18 months, and both were manageable. As of July 20, 2021, median follow-up after infusion was 15 months (range 2-24.7). 6 pts(75%) achieved a clinical response, and 5(62.5%) reached CR, of whom 80% kept ongoing CR (all at 18+ months). 3 pts received a second infusion, pt5 for consolidation therapy after CR, and pt2 and pt7 for salvage therapy after disease progression, but response wasn’t observed (Figure 1B). Pt1 with primary CNS lymphoma got continuing CR, without CRS or neurotoxicity (Figure 1C). The rate of overall survival, progression-free survival, and duration of response at 12 months was 87.5%, 62.5% and 66.7%, respectively.

ET019003 cells showed striking peak expansion during 10-20 days post infusion as measured as ET019003+ cells per milliliter of PB by flow cytometry and copies per microgram of genomic DNA by qPCR, but poor expansion was observed in the second infusions (Figure 1D). ET019003 cells were detectable in cerebrospinal fluid of pt1, and continued to be detectable at 12+ months in PB of pt3 and pt5. Serum cytokine levels increased mildly post-infusion, except elevated IL-6 (>10 folds of upper limit of normal) in 3 pts (pt1 with a high baseline level, coinciding with onset of CRS and neurotoxicity of pt2, and concurrent with pulmonary infection of pt8).

Conclusion: These data suggest ET019003-T cells had a good safety profile and could induce durable remission in patients with RR DLBCL, even with primary CNS lymphoma. γ/δ TCR-T cells may present a potential therapeutic option for these patients. 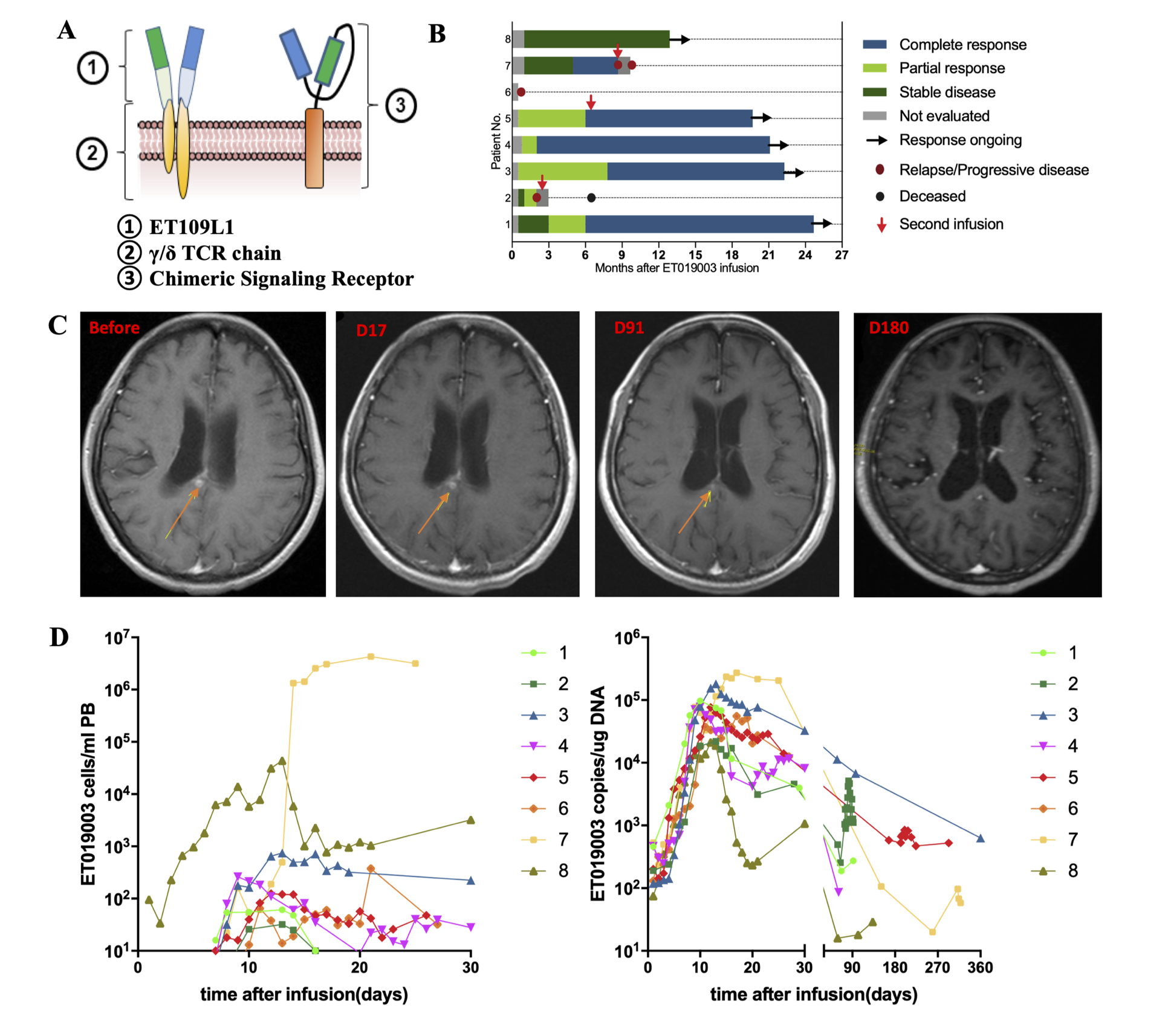