1016 How Effective Are the Immunosuppressive Therapies Rituximab and Mycophenolate Mofetil in Immune Thrombocytopenia? Real World Evidence from the UK ITP Registry

Immune thrombocytopenia (ITP) is a rare condition characterized by thrombocytopenia and variable bleeding severity. After acute management with steriods and intravenous immunoglobulin (IVIG), the next line therapies include medical treatments: immunosuppressive therapy such as rituximab, mycophenolate mofetil (MMF), thrombopoietin receptor agonists or surgical treatments. The choice of therapy depends on the time course of the disease, severity, patient choice and comorbidities. The evidence for comparative efficacy between different treatment modalities is lacking in the literature, in particular the immunosuppressive therapies MMF and rituximab.

The UK ITP registry is a national registry of primary ITP, capturing demographics, clinical features, treatments and comorbidities. As of July 2021, it has 4402 participants from 90 acute NHS Trusts across the UK. We analyzed data from the UK adult ITP registry to assess responses to rituximab and MMF therapy. All patients entered into the registry from 1st January 2010 were included in this analysis. Internationally recognized definitions of response based on platelet count were used: partial response (PR) platelets >30 x109/L and double baseline, complete response (CR) platelets >100 x109/L; No response – absence of CR and PR. In addition, we reviewed use of rescue therapy and use of additional therapies following treatment.

The total number of patients achieving platelet response at each time response are listed in table 1. Of those receiving rituximab with baseline platelets <30 x109/L at starting therapy, 40% had at least PR by 4 weeks, 50% at 12 weeks and 30% at 12 months. For MMF, these percentages were 30%, 30% and 18% respectively, however, the numbers of patients in the MMF group were lower.

In conclusion, this is one of the first studies, using real world data and long term follow up, to compare outcomes after immunosuppression. Both rituximab and MMF are often administered with additional therapies at the outset, predominantly steroids and IVIG, but also other therapies such as the thrombopoietin receptor agonists. The use of rescue therapies during follow up, suggesting treatment failure or a need to augment the response, is common with most patients in both groups ultimately having treatment change during follow up. Extension of this study to include other therapies and identifying groups most likely to respond will support optimization of treatment for patients with ITP. 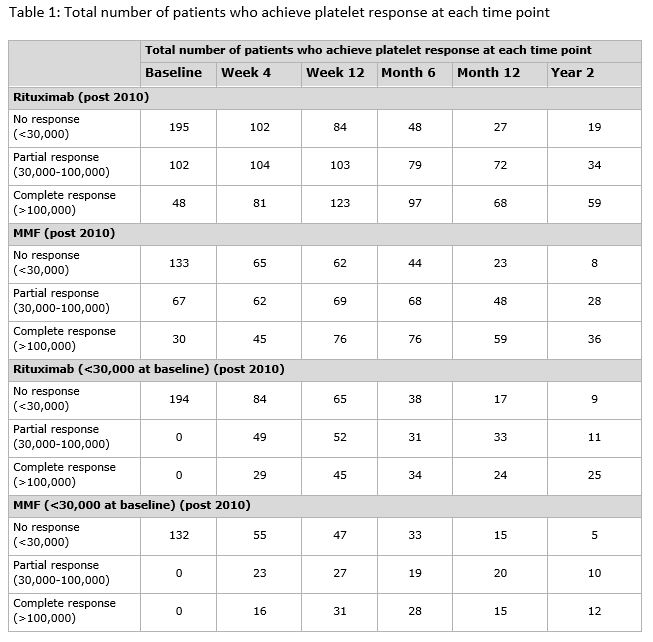 See more of: 311. Disorders of Platelet Number or Function: Clinical and Epidemiological: Poster I
See more of: Oral and Poster Abstracts
<< Previous Abstract | Next Abstract >>
*signifies non-member of ASH