310 Efficacy and Safety Results from Ascembl, a Multicenter, Open-Label, Phase 3 Study of Asciminib, a First-in-Class STAMP Inhibitor, Vs Bosutinib in Patients with Chronic Myeloid Leukemia in Chronic Phase after ≥2 Prior Tyrosine Kinase Inhibitors: Update after 48 Weeks

INTRODUCTION: Asciminib is the first BCR-ABL1 inhibitor that potently inhibits kinase activity of the BCR-ABL1 oncoprotein by Specifically Targeting the ABL Myristoyl Pocket (STAMP). The primary analysis from ASCEMBL, a randomized, phase 3 trial, demonstrated that asciminib has superior efficacy and a better safety and tolerability profile than bosutinib (BOS) in patients (pts) with chronic myeloid leukemia in chronic phase (CML-CP) after ≥2 prior ATP-binding tyrosine kinase inhibitors (TKIs). The major molecular response (MMR) rate at wk 24 was 25.5% with asciminib vs 13.2% with BOS; the difference in MMR rates, after adjusting for major cytogenetic response status at baseline, was 12.2% (95% CI, 2.19-22.30; 2-sided P=.029). Grade ≥3 adverse events (AEs) were reported in 50.6% and 60.5% of pts receiving asciminib and BOS, respectively, and AEs leading to discontinuation in 5.8% and 21.1%, respectively. After a median follow-up of 19.2 months (or 7.5 months’ additional follow-up since the primary analysis), we report updated efficacy and safety results from ASCEMBL.

METHODS: Adults with CML-CP treated with ≥2 prior TKIs were randomized 2:1 to asciminib 40 mg twice daily (BID) or BOS 500 mg once daily (QD). Eligible pts must have experienced treatment failure (lack of efficacy) per 2013 European LeukemiaNet recommendations for second-line TKI therapy or intolerance of the most recent TKI at screening. Pts intolerant of their most recent TKI were eligible only if they had BCR-ABL1 on the International Scale >0.1% at screening. Pts with known BOS-resistant T315I or V299L mutations were ineligible. The cutoff date for the current analysis was January 6, 2021.

With a longer duration of exposure in the asciminib arm, the safety and tolerability profile in the current analysis remains similar to that at the primary analysis. Median duration of exposure was 67.1 wk (range, 0.1-162.1 wk) for asciminib and 29.7 wk (range, 1.0-149.3 wk) for BOS. By the cutoff date, 91.0% of pts on asciminib and 97.4% of pts on BOS reported ≥1 all-grade AE; 54.5% and 67.1% of pts, respectively, reported ≥1 grade ≥3 AE. No additional fatal events were reported since the primary analysis. Fewer pts in the asciminib (7.1%) than BOS (25.0%) arm experienced AEs leading to treatment discontinuation (Table 2). The most common AEs leading to treatment discontinuation included thrombocytopenia (3.2%) and neutropenia (2.6%) in the asciminib arm and increased alanine aminotransferase (5.3%) and neutropenia (3.9%) in the BOS arm.

CONCLUSIONS: Resistant/intolerant CML-CP after 2 lines of TKI treatment remains BCR-ABL1 dependent. The novel STAMP inhibitor asciminib demonstrates continued superior efficacy and a limited adverse event profile; myelosuppression, while more prominent, appears to be early and disease related. Secondary resistance based on loss of MMR is rare. Overall, after a median follow-up of 19.2 months, the positive benefit-risk profile of asciminib vs BOS continues to support the use of asciminib as a new therapy in this heavily pretreated pt population.

This study is sponsored by Novartis. 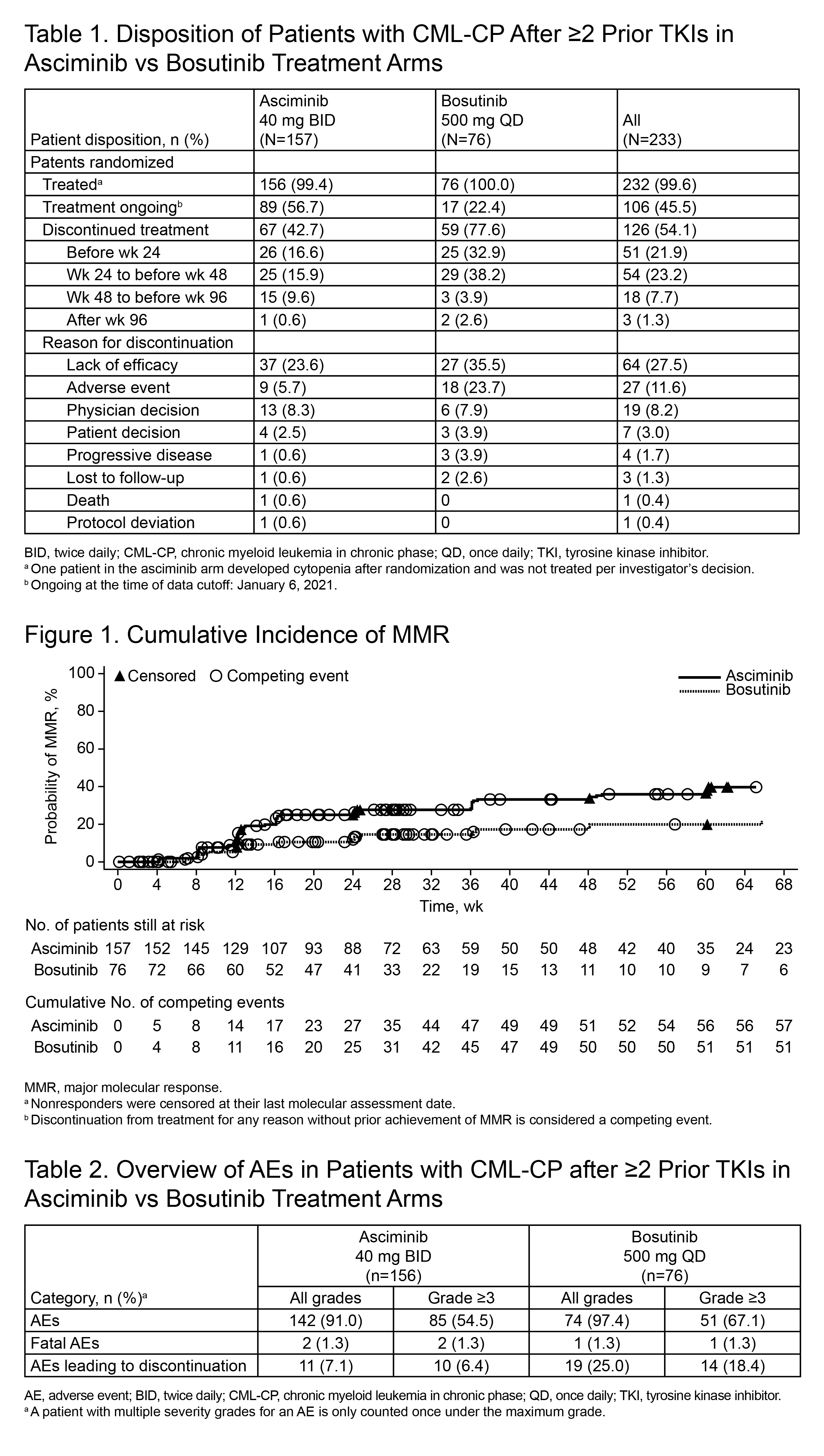