Severe acute respiratory syndrome coronavirus 2 (SARS-CoV-2) is responsible for an ongoing global pandemic. Phase III trials have demonstrated excellent efficacies of mRNA vaccines against SARS-CoV-2 in large population studies (Baden LR, NEJM, 2021; Polack FP, NEJM, 2020). Immunosuppressed individuals such as chronic lymphocytic leukemia (CLL) patients are at risk for a suboptimal response to 2 vaccine doses (Herishanu Y, Blood, 2021). The French National Authority for Health recommends the use of a third dose in immunosuppressed patients. However, seroconversion rate after the triple-dose vaccine is not yet known.

The objective of our study was to evaluate SARS-CoV-2 antibody responses after the first, second and third doses of the BNT162b2 and mRNA-1273 vaccines.

Flow cytometry results suggest a differential balance of the T CD4+ cell subpopulations in Binet stage A and in patients on targeted therapy compared to healthy controls.

Post-dose 2 seronegative patients were proposed a third dose and to date, 66 have been tested for the antibody response 4-6 weeks post-dose 3. The post-dose 3 response rate was 42% (28/66). TN patients and previously treated patients had a significantly higher response rate (57%, 16/28) compared to on-therapy patients (32%, 12/38, P=0.03). We further analyzed patients tested post-dose 2 with the Abbott Architect SARS-CoV-2 IgG anti-Spike assay (n=24). Those who achieved seroconversion after the third dose (n=10) had significantly higher titers post-dose 2 (median 12, IQR 3.0-40.8) compared to those who remained seronegative (n=14) (median 2.2, IQR 0.5-5.1, p<0.01), although both median values are considered below the threshold by the manufacturer.

An additional cohort of 40 CLL patients who presented a SARS-CoV-2 infection prior to vaccination participated to the study and was analyzed independently. All patients achieved seroconversion after infection and a single dose of vaccine, even though 30% (n=12) had an ongoing CLL treatment.

In conclusion, double-dose mRNA vaccination generated a humoral response in 52% of our CLL cohort and a third dose induced seroconversion in 42% of the patients who remained seronegative after the second dose. The major independent predictor of negative antibody response was ongoing treatment with BTKi. The strongest boost to immune response against the virus seems to be SARS-CoV-2 infection, as a substantial increase in anti-Spike antibodies was observed in all CLL patients with prior infection, after a single dose vaccination. 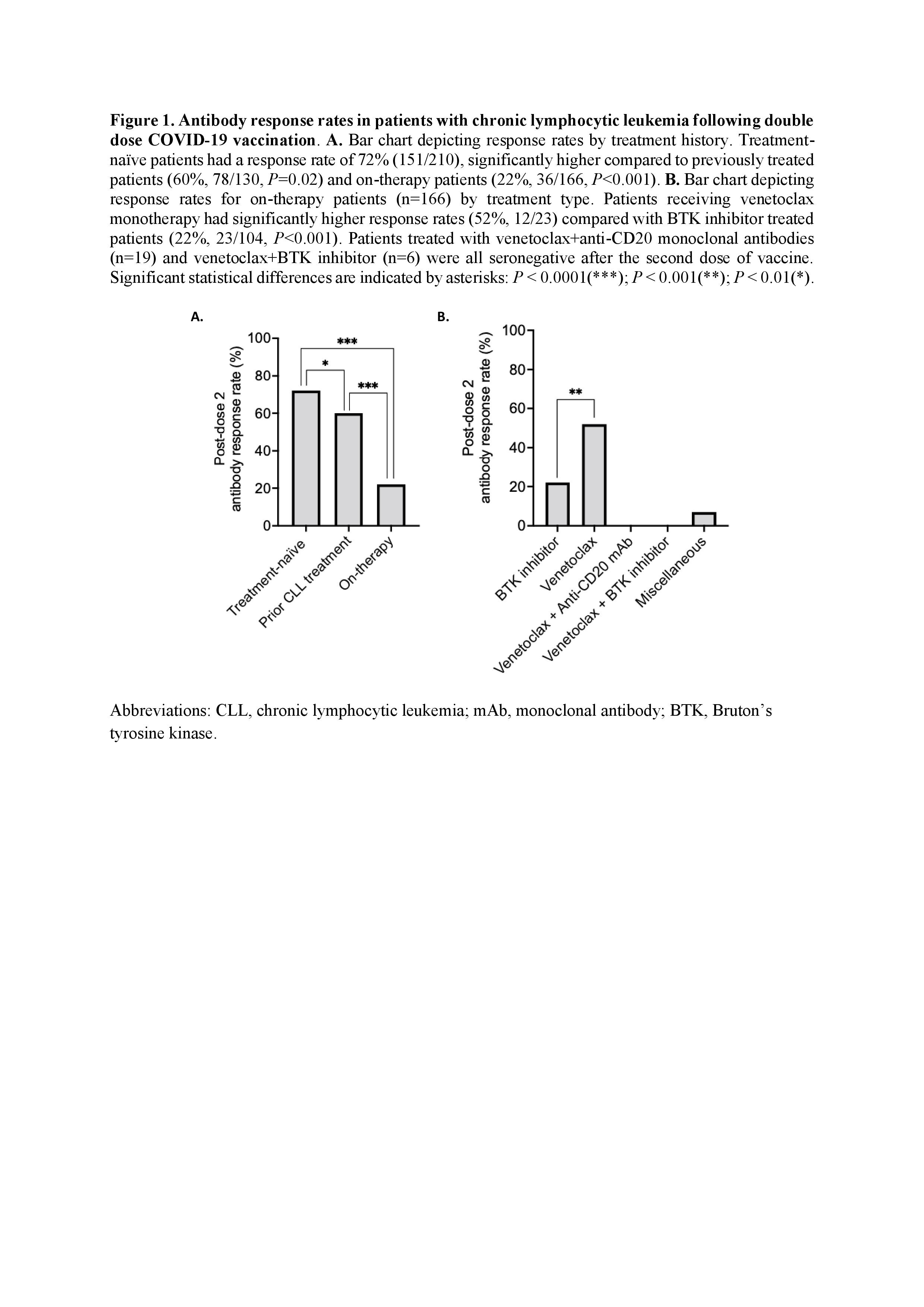