Background: Between April 2012 and July 2018, adult patients aged 25-65 years with newly diagnosed T-cell acute lymphoblastic leukaemia (T-ALL) in 48 UK centres were randomised at trial entry to receive standard of care (SOC) ALL induction phases I and II chemotherapy with or without the addition of single-agent nelarabine.

Results: 144 eligible patients were recruited, of whom 75 were randomised to SOC and 69 to SOC plus nelarabine (SOC+N). Baseline characteristics were balanced for factors including age (median age 38 years), presenting white cell count and performance status with a slightly greater proportion with cytogenetic high-risk factors in the SOC arm (8.5% vs 20%).The complete remission (CR) rate following induction phase I and II was 90.7% in the SOC arm and 87.0% in the SOC+N arm.

The rate of severe adverse events and non-relapse mortality did not differ between the arms. There was no increase in grade 3-4 neurotoxicity reported in patients who received nelarabine with 6 events (9.0%) reported in the SOC arm during phase II induction and 7 events (11.9%) in the SOC+N arm. There were no deaths reported from neurotoxicity in either arm.

Of those randomised at diagnosis to receive SOC+N, 48 (71.0%) actually received the agent, as those with persistent therapy-related toxicities were excluded. Forty-three patients (62.3%) received all 3 planned doses. Analysis is by intention-to-treat.

Clinical implications: Three doses of nelarabine added to standard chemotherapy in the treatment of adult T-cell ALL patients was well tolerated. However, there was no demonstrable EFS or OS benefit seen with the addition of nelarabine. Survival outcomes for patients with T-cell ALL in the UKALL 14 trial were improved compared to UKALL12 despite the older age of patients in UKALL14 suggesting that other protocol factors had a positive effect on outcomes. The paediatric COG AALL0434 study showed a DFS benefit for nelarabine given as six 5-day courses. It is possible that too few doses were given in UKALL14 to show benefit.

We identified ABD as an independent negative prognostic factor within this cohort of adult patients. Patients with T ALL and ABD had over twice the risk of relapse, suggesting that they should be considered high-risk in future studies. We were not able to demonstrate a benefit of nelarabine according to ABD status. 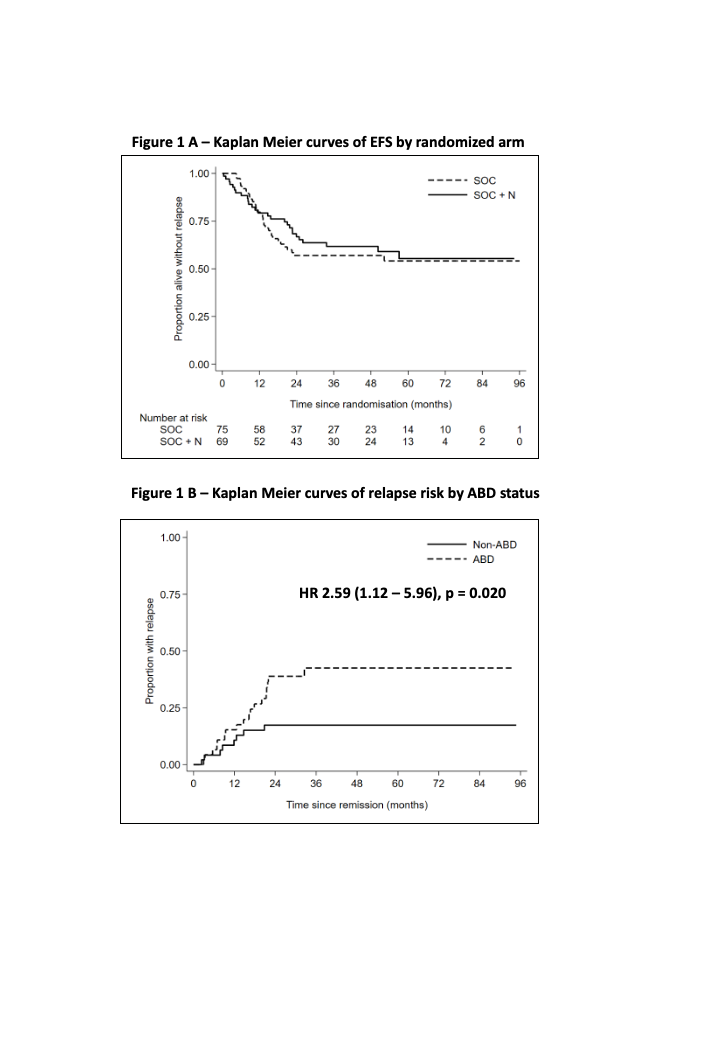 OffLabel Disclosure: Nelarabine for denovo ALL