Introduction: Pediatric T-cell lymphoblastic lymphoma (T-LBL) is a subtype of non-Hodgkin lymphoma (NHL) that arises from the malignant transformation of immature T-cells, similar to T-cell acute lymphoblastic leukemia (T-ALL). T-LBL is characterized by massive infiltration of blasts in the mediastinum and lymph nodes without or occasionally with low percentages of blasts in the bone marrow (<25%). Even though T-LBL and T-ALL are thought to be closely related, extensive analyses have led to improved understanding of the biology of T-ALL, whereas similar efforts for T-LBL are still scarce. Nevertheless, recent studies have made progress in increasing the understanding of the biology of T-LBL. It has been reported that T-LBL seems to be associated with a high occurrence of second primary malignancies after treatment of non-Hodgkin lymphoma (NHL) (Attarbaschi, 2020). This study revealed a relatively high number of T-LBL patients in a selected cohort of NHL cases who developed second primary malignancies (69/189). In the current study, we describe a complete and unselected T-LBL cohort based on clinical presentation of disease, as well as second primary malignancies and comorbidities.

Methods: We present a retrospective pediatric T-LBL cohort (n=88) for patients diagnosed between January 2007 and September 2020 who were treated according to the EURO-LB02 protocol in one of the former pediatric oncology centers in the Netherlands.

The treatment response of the CMMRD T-LBL patients was favorable, six out eight patients (75%) achieved complete remission (CR). In general, treatment was tolerated well in the CMMRD patients, without significant delay of chemotherapy. However, three out of eight CMMRD patients developed pulmonary aspergillosis infection during T-LBL treatment, which was fatal for one patient. 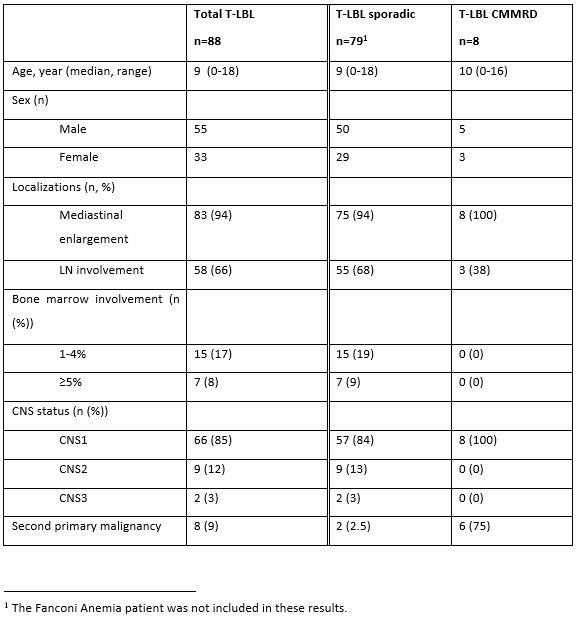