Natural history studies, which describe changing disease outcomes under real-world clinical practice, can help support drug development for rare diseases by defining appropriate endpoints for clinical trials. The current study provides natural history information on survival and mortality in light chain (AL) amyloidosis, a rare disease that was historically considered inevitably fatal. With the recent expansion of effective therapeutics, patients with this disease are living longer, which in turn necessitates a better understanding of the factors leading to death in later disease course.

To evaluate (1) trends in overall survival (OS) over time and (2) primary causes of death across the course of AL amyloidosis disease.

We identified 2,337 patients diagnosed with systemic AL amyloidosis between 1980 and 2019 from the prospectively maintained database at the Boston University Amyloidosis Center (ClinicalTrials.gov Identifier: NCT00898235). Disease outcomes were analyzed according to date of tissue diagnosis: 1980–1989 (era 1, n = 185), 1990–1999 (era 2, n = 575), 2000–2009 (era 3, n = 865) and 2010–2019 (era 4, n =712). Survival information was verified through yearly clinical evaluations, contact by phone/letter for patients who did not return for follow-up, or the U.S. Social Security Death Index if contact was not established. We defined deaths as AL amyloidosis-related when clinical data indicated organ progression or complications from plasma cell-directed therapy. Deaths occurring while in remission, off treatment and without evidence of organ progression were considered disease-unrelated.

Under changing standards of care, OS improved and early mortality declined over the last 40 years, supporting a much-improved outlook for current and future patients with AL amyloidosis. Cardiac failure and sudden deaths decreased across the course of disease. Even so, progression of amyloidosis remained a top cause of death even among long-term survivors. 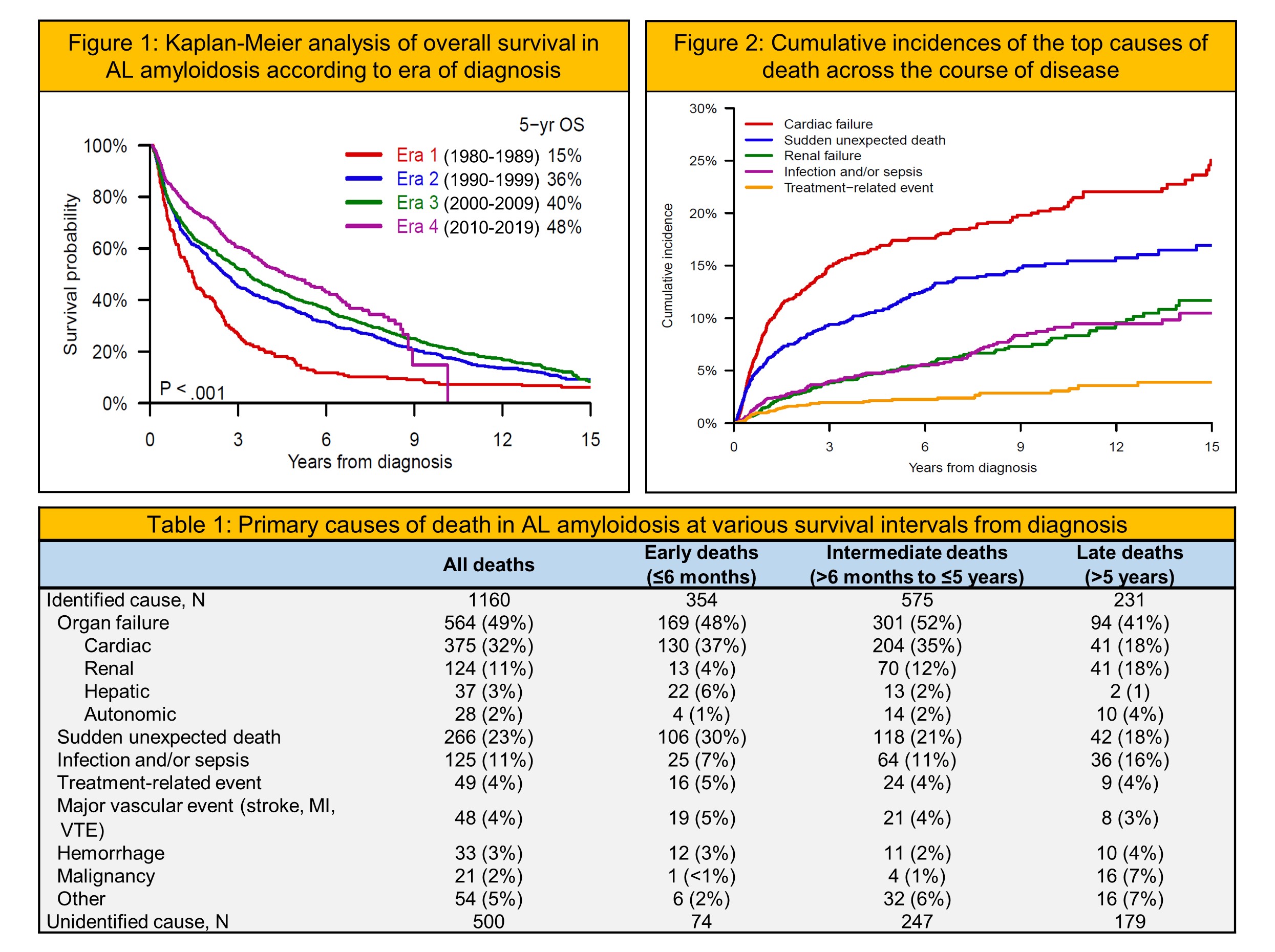 See more of: 652. Multiple Myeloma and Plasma cell Dyscrasias: Clinical and Epidemiological: Monoclonal Gammopathies of Determined Significance: What We Have and What We Want
See more of: Oral and Poster Abstracts
<< Previous Abstract | Next Abstract >>
*signifies non-member of ASH