175 A Population Cohort Study to Evaluate the Risk of Ischemic Stroke Among Individuals with a New Diagnosis of Cancer Compared to Matched Cancer-Free Controls: Impact of Prior Stroke History

Cancer is a risk factor for thrombosis, but unlike venous thrombosis, its association with ischemic stroke, and its impact on stroke management and post-stroke outcomes are not well characterized. The primary objective of this study was to measure and compare the risk of ischemic stroke in individuals with a new diagnosis of cancer and those without a history of cancer in two separate matched cohorts based on the absence (Matched Cohort 1) or presence (Matched Cohort 2) of a prior diagnosis of ischemic stroke (Figure 1).

Methods: We conducted a population-based matched cohort study of adults ≥18 years using linked clinical and administrative health databases in Ontario, Canada (2010 to 2019). Individuals with a new diagnosis of cancer were matched (1:1) to cancer-free controls by age and sex. Cancer diagnoses were determined using ICD-O-3 diagnostic codes (basal and squamous cell carcinoma and primary central nervous system tumors were excluded). For cancer patients, the index date was the diagnosis date and a corresponding dummy index date was assigned to the matched cancer-free control. The primary outcome was the incidence of ischemic stroke (time to ischemic stroke following index) determined using validated ICD-9 or -10 diagnostic codes from hospitalizations or emergency department visits. Analyses were conducted separately, in parallel, for each cohort. Standardized differences were used to compare the distributions of baseline characteristics. Cumulative incidence function (CIF) curves were generated for ischemic stroke and all-cause mortality. Competing risk methods were used to calculate sub-distribution adjusted hazard ratios (aHR) and 95% confidence intervals (CI) for ischemic stroke, where death was treated as a competing event. Interactions with the timeline at 1.5 years after index were incorporated to assess if the hazard ratio for the main exposure (cancer vs cancer-free) varied before and after the 1.5-year mark. Regression analyses were adjusted using baseline characteristics for which there was imbalance between groups. 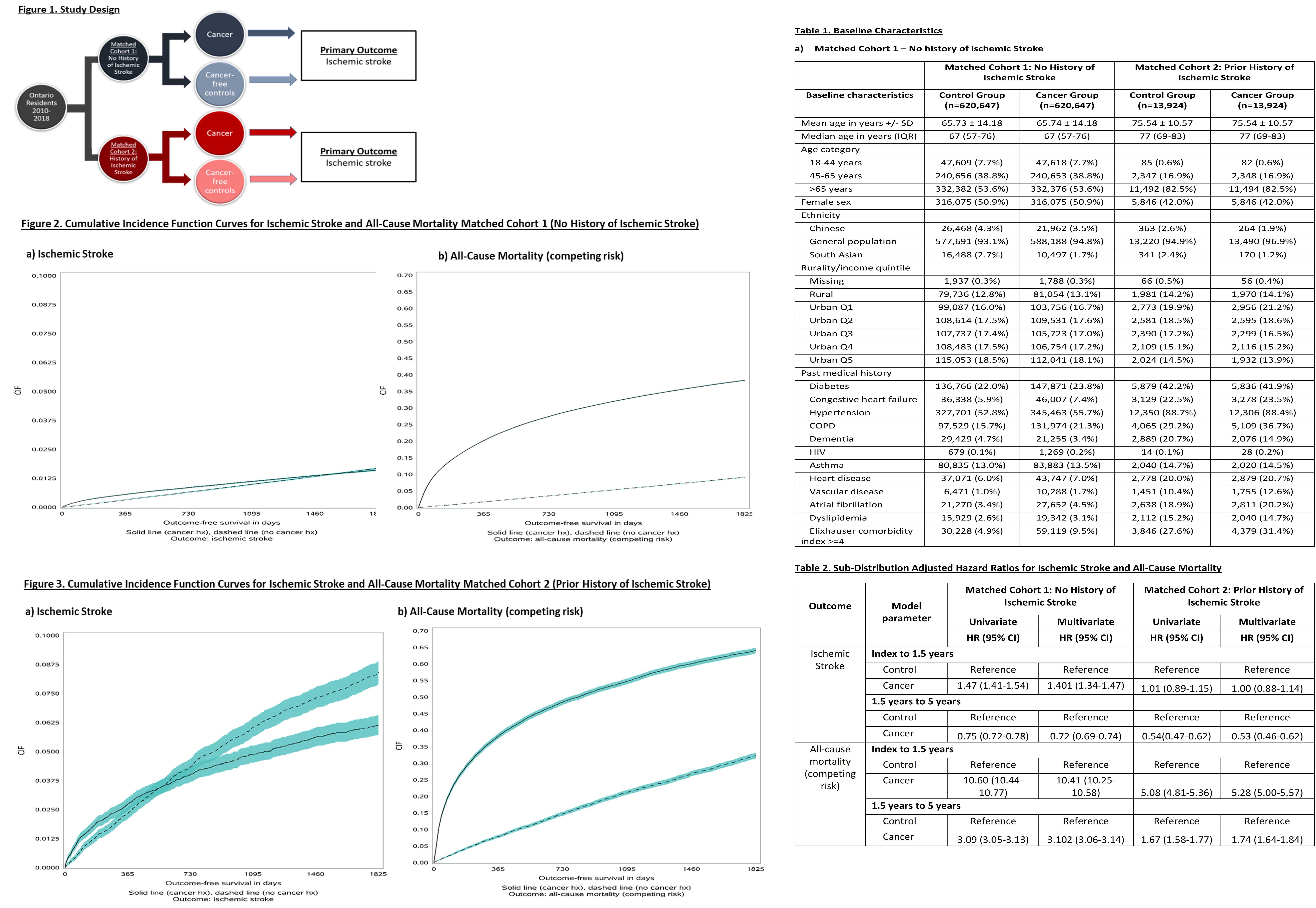