Background: As the treatment options for immune thrombocytopenia (ITP) continue to expand, the choice of which treatment to give to an individual patient has become increasingly complex. Therefore, a laboratory marker to help guide treatment selection would be clinically useful. The immature platelet fraction (IPF), measured clinically by automated Sysmex hematologic analyzers, correlates with bone marrow thrombopoietic activity and may correlate with disease activity in patients with ITP.

Objective: To investigate the relationship between pre-treatment immature platelet fraction (IPF) and treatment response among pediatric patients with ITP.

Methods: This is an observational cohort study of 148 patients with ITP who received ITP-directed treatment as monotherapy at 3 tertiary academic children’s hospitals. Eligibility included a clinical diagnosis of ITP, ITP-directed surgical or pharmacologic treatment given as monotherapy, and available pre-treatment IPF values. The Sysmex XN-series measures IPF by adopted fluorescence flow cytometry using a semiconductor dioxide laser to measure platelets stained with oxazine fluorescent dyes. Demographic and clinical characteristics, laboratory studies, and treatments were collected. Response to treatment was defined as a platelet count ≥30 x 109/L and at least 2-fold increase from the baseline platelet count within 3 weeks of first dose of IVIG, Rh(D) immune globulin, or corticosteroid or within 3 months of all other therapies. For second-line treatments, platelet counts within 1 month after a rescue therapy were excluded. Regression analysis was utilized to estimate association between variables; estimated coefficients and p values are reported.

Conclusions: Pre-treatment platelet count and IPF are inversely correlated in children with ITP, although there is significant variability in IPF at low platelet counts. The IPF at ITP diagnosis and prior to treatment does not correlate with platelet response to the most common ITP-directed treatments in children. A normal or elevated IPF should not impact decision-making about initiation of any specific ITP-directed treatments, including thrombopoietin receptor agonists or immunosuppressive therapy, in children with ITP. 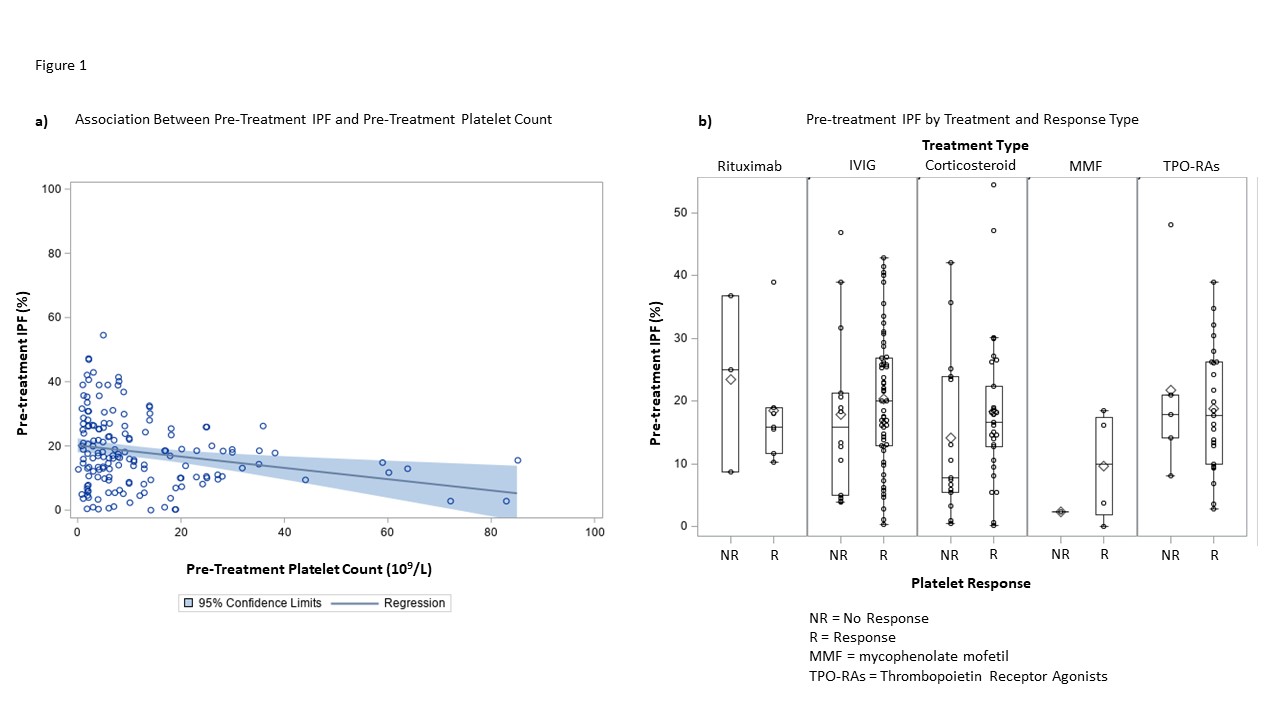 See more of: 311. Disorders of Platelet Number or Function: Clinical and Epidemiological: Poster I
See more of: Oral and Poster Abstracts
<< Previous Abstract | Next Abstract
*signifies non-member of ASH