AML blasts harbor multiple genomic, epigenomic, and transcriptomic abnormalities. Proteins are responsible for much of the functional biology derived from these transforming events, yet few studies have examined the global proteome in specimens from AML patients. To gain insight into the biology and prognostic biomarkers for AML, we examined the genome, transcriptome and proteome in highly enriched less differentiated, viable leukemic blasts (VLBs) from previously untreated patients with NPM1 mutated (NPM1+) AML. We focused on NPM1+ AML because 1) NPM1 mutations are the most common genomic abnormality used for risk stratifying AML patients; 2) clinical outcomes for NPM1+ patients vary substantially; and 3) restricting studies to VLBs from patients with NPM1+ AML reduces the molecular diversity and confounding interactions that may impede identification of biological and clinically relevant biomarkers.

Cryopreserved specimens from patients with NPM1+ AML were obtained from the SWOG Leukemia and Fred Hutch/University of Washington Hematopoietic Disease Repositories (N=178). All patients were treated with dose intensive induction and consolidation with curative intent. VLBs were isolated from specimens using fluorescence-activated cell sorting (FACS). Fragment analysis was used to identify FLT3-ITDs, while other genomic mutations were identified using targeted next generation sequencing (NGS). RNA sequencing (RNAseq) was used to quantify transcript expression, while protein expression was quantified using tandem mass tag labelling followed by liquid chromatograph with tandem mass spectrometry (TMT-LC-MS/MS). Prognostic significance of biomarkers was examined by univariate and multivariate analyses, with the later adjusting for both age and ELN2017 risk.

Adequate analyte from VLBs were available for RNAseq and TMT-LC-MS/MS studies in 131 and 71 patients, respectively. Proteomic profiling identified 6712 expressed proteins. Multivariable analyses adjusting for age and ELN2017 risk identified 211, 218, and 313 proteins were significantly associated with CR, EFS, and OS, respectively, of which 116 and 174 had a HR ≥ 2 or ≤ 0.5 for EFS and OS (Fig 1A). Analyses showed an overall modest correlation between RNA and protein expression for the 6297 genes present in both RNA and protein datasets (Fig 1B, R =0.27). A total of 163 of the 174 proteomic candidates for OS had RNAseq data, but RNA expression was not significantly correlated with OS for most of these genes (Fig 1C). Similarly, the expression correlation between RNA and protein was not improved by restricting the analyses to these 163 genes (Fig 1D, R =0.28).

We also compared protein expression between the NPM1+ VLBs and CD34 progenitors from healthy donors (NLCD34=5), which identified 747 proteins with significant expression differences between the two cell populations (FDR ≤ 0.1). Seventy-three of the 747 proteins displayed > 3-fold increased expression in NPM1+ VLBs, some of which activate targetable pathways (HOMER->WNT/CTNNB1) and/or amenable to adoptive immunotherapies (e.g., CT45). Additional analyses identified 401 proteins with significantly increased expression in VLBs harboring a high FLT3-ITD allelic ratio (NPM1+/FLT3-ITD-H), a less favorable population of patients. In these less favorable patients, many of the same proteins remained overexpressed (e.g., CT45 with 7.85-fold increased expression, FDR=0.009), but other targetable proteins also emerged. For example, PKCD had a 3.41-fold increased expression (FDR=0.001) in the NPM1+/FLT3-ITD-H VLBs, and targetable inhibitors against this protein (e.g., Parsaclisib) are already in clinical trials for other cancers.

This study examines for the first time the global proteome in a large number of VLBs from patients with AML. As with recent publications examining other cancers, the overall expression correlation between RNA and protein was modest, at best, and most of the informative prognostic proteins for OS were not significant in the transcriptome. In addition, the results show the potential to identify novel proteomic targets in subpopulations of AML patients, which may not be otherwise discovered using other means. Thus, the results demonstrate the need to include proteomic profiling in future multi-omics studies seeking to discover novel prognostic biomarkers and therapeutic targets. 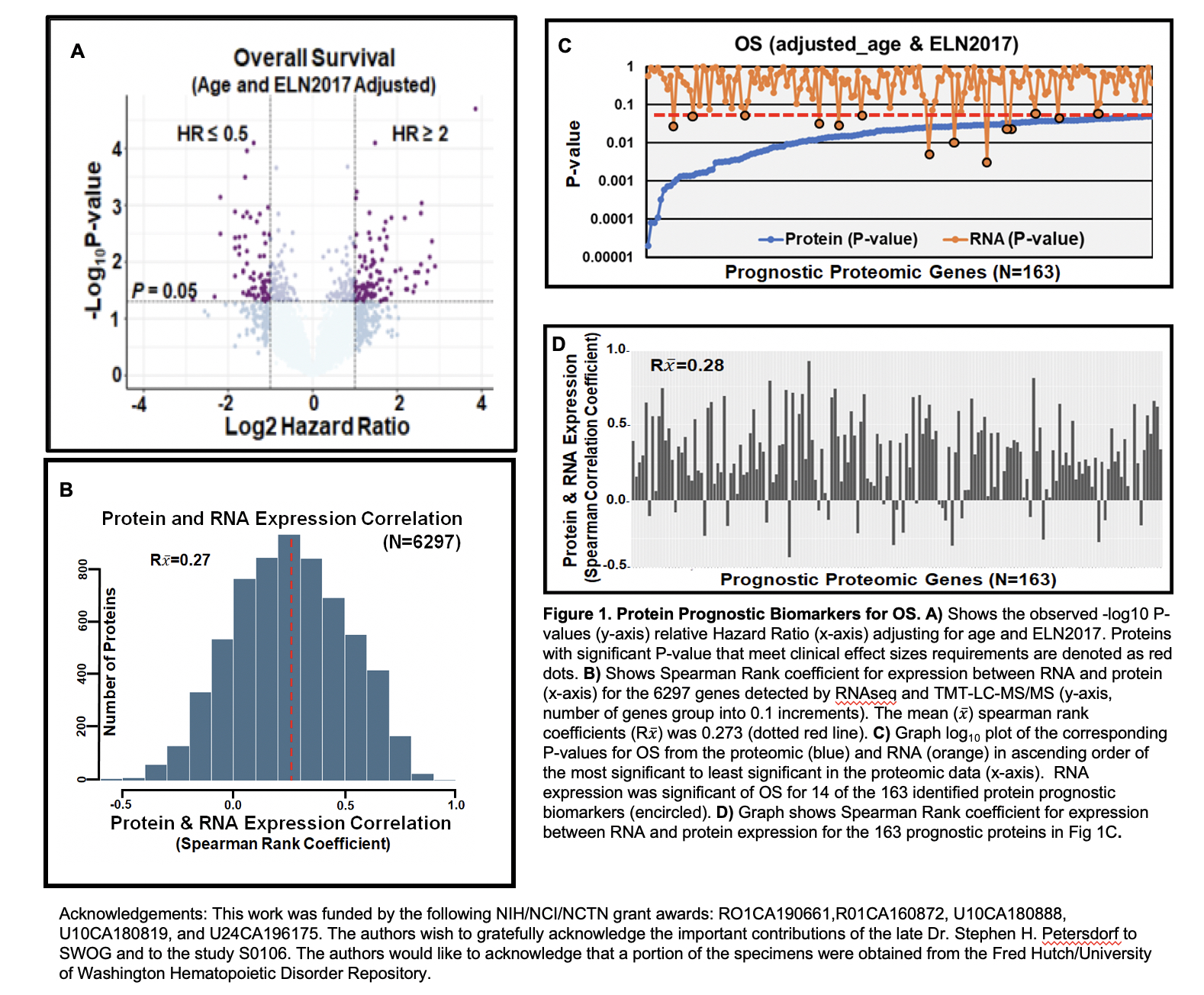