Focal amplifications and rearrangements drive tumor growth and evolution in cancer. Focally amplified regions often involve the juxtaposition of rearranged segments of DNA from distinct chromosomal loci into a single amplified region and nearly half of these regions can be explained by circular, extrachromosomal DNA (ecDNA) formation. Cancer-associated ecDNA shows a unique circular placing ecDNA at the interface of cancer genomics and epigenetics. As formation of ecDNA represents a manifestation of genomic instability, we have investigated presence and prognostic impact of ecDNA in multiple myeloma (MM).

Whole genome (WGS) and transcriptome (RNAseq) sequencing data from CD138 purified MM cells from 191 uniformly-treated newly diagnosed MM patients were used for this analysis. Copy number variants (CNV), single nucleotide variants (SNV) and structural variants (SV) were identified on all WGS samples using Facets, Mutect2 and Manta. Seed data from these CNV results was passed to the AmpliconArchitect tool to determine presence of focally amplified and rearranged segments of DNA. Seed CNV thresholds were set for a minimum CNV size of 100kb and a copy number of equal or greater to 5. Extrachromosomal calls were then annotated using the Amplicon Classifier to determine the presence of ecDNA. Multivariate survival analysis was performed after segregating samples into the conventional myeloma risk classifications including translocations, copy number alterations, ISS, age and mutations associated with risk. Differential expression analysis was performed on transcriptomic data using DEseq2.

We identified 6.8% of the newly diagnosed patients with ecDNA, 12.5% with complex non-cyclic DNA amplifications and 10.1% with linear amplifications. ecDNA and complex events were targeting MM dependent genes, including MYC/PVT1, IRF4 as well as known driver genes such as CDYL and TRAF2. We further evaluated association between ecDNA, complex rearrangements, linear amplification and patients with none of these amplification types and found that patients with ecDNA had significantly poor PFS (median PFS 22 months vs. 41 months) and OS (median OS 41 months vs. 105 months). Patients having ecDNA in their MM cells did not show any significant enrichment for known translocations, double hit or TP53 mutations. In a multivariate model including ecDNA and all other known MM risk features, ecDNA was found to be an independent predictor of progression free survival.(HR 2.6, CI: 1.26 -5.6, p=0.0082) and overall survival (HR 7.94 CI:3.5-17.9 p < 0.0001). Patients with ecDNA have higher mutational load probability(8798 vs 6982, effect size = 0.64 , probability is 91.1). However, this was not reflected in heterogeneity by using MATH score. We found that patients with ecDNA are likely to have BRAF mutations (OR= 25.07 [2.57 – 330 95% CI], p value = 0.002), however overall RAS/RAF pathway mutations were similar to other patients. Patients with ecDNA showed fragile DNA with more breaks (median segments 197 vs. 125.5, p value = 0.001). Although ecDNA is defined as copy number gain with fragments having 5 or more copies, overall genomic gain between ecDNA and other patients were similar. However, overall genomic loss in patients with ecDNA were higher than others (7% vs. 4.2%, p = 0.06). By differential gene expression analysis we noted 98 differentially expressed genes in MM cells with ecDNA. The downregulated geneset involved pathways responsible for cell death as well as the RAS pathway. Interestingly, CD38 was upregulated in the ecDNA dataset suggesting greater potential for CD38 targeting therapies in these patients.

ecDNA, as an unique marker of perturbed genomic integrity, is observed in a subset of patients and is an independent prognostic marker in newly diagnosed MM patients. As patients with ecDNA are not fully captured by other risk features its incorporation in an expanded definition of a high risk group of multiple myeloma should be investigated. Future studies will endeavor to explore the biological mechanism through which ecDNA are formed and influences outcomes in myeloma. 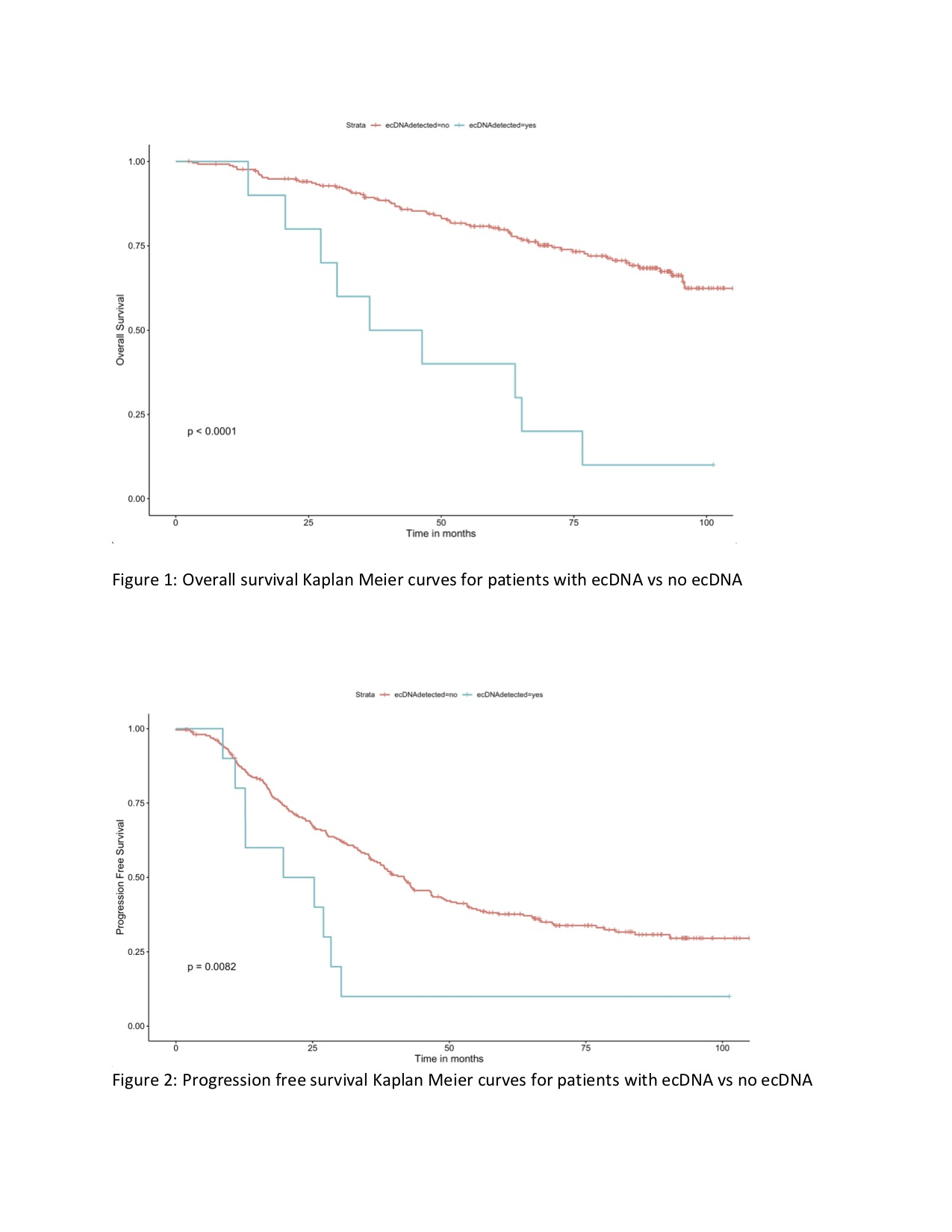