Background: Therapeutic resistance and treatment tolerance vary greatly in patients with AML, likely due to the advanced age and genetic diversity in pharmacokinetics of those affected. Undoubtedly, tools to accurately predict outcomes of individual therapies for patients could inform decision-making and improve response rates. To this end, several scoring systems have been developed aimed at identifying patients at high risk of poor outcome after intensive chemotherapy. Similar tools for use after non-intensive therapies are currently not available. As such therapies are increasingly effective and more widely utilized we sought to develop tools to predict early death and survival for patients treated with non-intensive therapies.

Patients and Methods: We developed prediction models for all-cause death by day 28, 42, 56, and 100 from enrollment using data from 796 patients enrolled on MRC/NCRI trial LI-1, which we then validated in a cohort of 540 patients treated on SWOG trials S0432, S0703, and S1612. Treatments included: Low dose Ara-C (LDAC) alone, sapacitabine alone and LDAC in combination with vosaroxin, tosedostat or ganetespib (MRC/NCRI); Azacytidine (AZA) alone, tipifarnib alone, and AZA in combination with mylotarg, midostaurin, and nivolumab (SWOG). The following covariates were available in the MRC/NCRI and SWOG cohorts to build multivariable logistic regression models (quantitative unless specified otherwise): age, performance status (PS; 0-1 vs. 2-4), secondary AML (vs. de novo AML or high-risk myelodysplastic syndrome), white blood cell and platelet counts, and percentage of bone marrow blasts – all assessed at enrollment. The regression coefficients from the model fit in the MRC/NCRI cohort were used to derive a score and applied to each patient in the SWOG cohort. The models’ prognostic accuracies were assessed using the area under the receiver operating characteristic curve (AUC). For the MRC/NCRI cohort, additional covariates were available: cytogenetic risk (per Grimwade 2011), FLT3-ITD, and NPM1 mutation and patient-reported outcomes using the QLQ-C30 instrument. Logistic regression models with these covariates were fit and optimism-corrected AUC estimated to assess prognostic performance for early death.

Results: Both patient cohorts were largely composed of older individuals (median age of 75 [range: 60-91] for MRC/NCRI and 77 [60-94] for SWOG, respectively. A substantial subset in each had a PS of 2-4 (MRC/NCRI: 20%; SWOG: 37%) and/or secondary AML (MRC/NCRI: 26%; SWOG: 41%). Overall, the ability to predict early death either by day 28, 42, 56, or 100 was limited in the MRC/NCRI cohort. Subscales of the QLQ-C30 had univariate AUC=0.67, the highest among all covariates evaluated. Multivariable models with just clinical covariates had optimism-corrected AUCs ranging from 0.63-0.65; adding cytogenetic risk and FLT3-ITD and NPM1 mutation status led optimism-corrected AUCs ranging from 0.64-0.66; addition of two QLQ-C30 subscales (fatigue and appetite loss) led to optimism-corrected AUCs ranging from 0.66-0.69. The SWOG cohort did not collect QLQ-C30 or mutational data on all patients and only the clinical multivariable models could be evaluated. The models had a similar performance in the SWOG cohort with AUCs ranging from 0.65-0.68.

Conclusion: Our ability to predict early death in older patients treated with lower intensity AML therapies is limited with routinely available clinical variables. Inclusion of cytogenetic risk, FLT3-ITD, and NPM1 mutation status minimally improved the prognostic accuracy as did some of the QLQ-C30 subscales. Our data highlight the difficulties in predicting outcomes with non-intensive AML therapy with routinely available baseline clinical information. Improving the clinical utility of these models may require more complete characterization of patient comorbidities (including frailty index, cognitive function, renal and hepatic function, comorbidity scores) or additional PRO measures since some QLQ-C30 subscales had the strongest univariate signals. 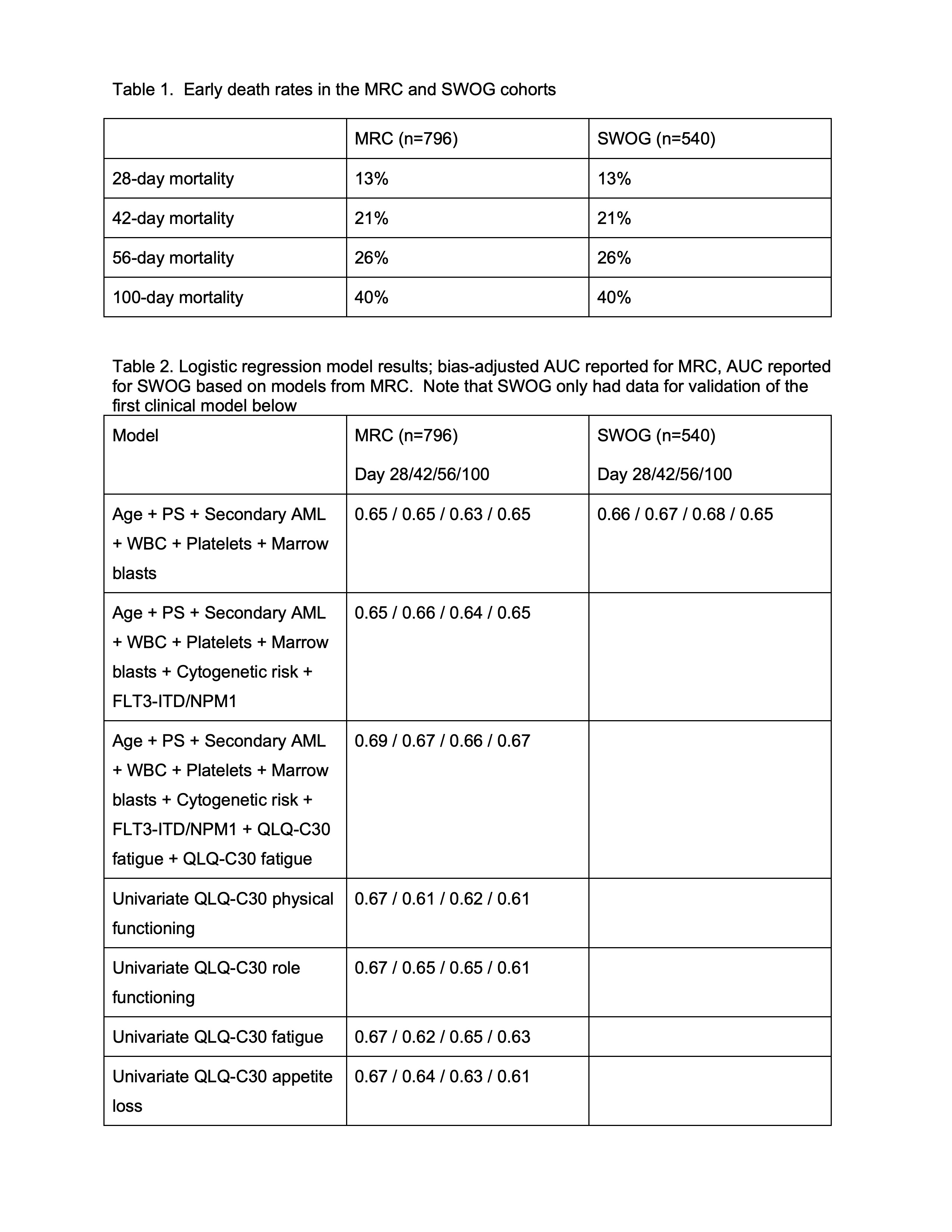