Background: Although guidelines include direct-acting oral anticoagulants (DOACs) as an alternative to low molecular weight heparins (LMWHs) for treatment of cancer associated venous thrombosis (CAT), specific recommendations for selection of patients for DOAC treatment vary. Recommendations for use of DOACs are driven predominantly by perceptions of risk: benefit ratio (often associated with different cancer subtypes). We sought to assess patient characteristics and temporal changes in DOAC (vs. LMWH) utilization in patients being treated in routine practice for CAT.

Methods: This analysis is part of the Observational Studies in Cancer Associated Thrombosis for Rivaroxaban – United States (OSCAR—US) program. OSCAR—US is an ongoing study utilizing longitudinal patient-level medical record data from Optum for 91+ million patients seen at 700+ hospitals and 7,000+ clinics across the US. To be included in the present study, adult patients had to be diagnosed with active (primary or metastatic) cancer, undergone hospitalization, emergency department or observation unit admission associated with a primary International Classification of Diseases (ICD)-9th or -10th revision diagnosis code for venous thromboembolism (VTE) between January 2013 and September 2020, received a DOAC or LMWH on day 7 of CAT treatment, and been active in the data set for at least 12 months prior to the CAT. Cohort assignment was based upon anticoagulant received on day 7 to increase the study’s likelihood of appropriately classifying patients into their intended long-term treatment group. We defined active cancer as any cancer associated with ongoing treatment with chemotherapy, immunotherapy, radiation, or recent surgery; the presence of metastatic disease (regardless of time from initial cancer diagnosis); or provider encounter with a primary diagnosis code for cancer within the 6 months prior to the CAT. We excluded patients with an alternative indication for anticoagulation use or evidence of anticoagulation during the 12 months prior (per written prescription or patient self-report). For this analysis, year of CAT diagnosis was grouped into three mutually exclusive categories (2013-2015, 2016-2018, and 2019-2020) to represent early DOAC availability for VTE, peri-DOAC CAT trials and post-CAT guideline recommendation periods. Categorical data were reported as percentages, while continuous data were reported as means ± standard deviations (SDs). Chi-square and independent sample t-tests were used to test for differences in characteristics and treatment patterns between cohorts.

Conclusions: In this US population, DOACs were increasingly being utilized for the management of CAT patients and for longer treatment durations than LMWHs. The finding of increasing frequency in use of DOACs vs. LMWHs appeared consistent across all major cancer subtypes. Given their common use, future analyses should evaluate the real-world effectiveness and safety of DOACs compared to LMWHs within individual cancer subtypes. 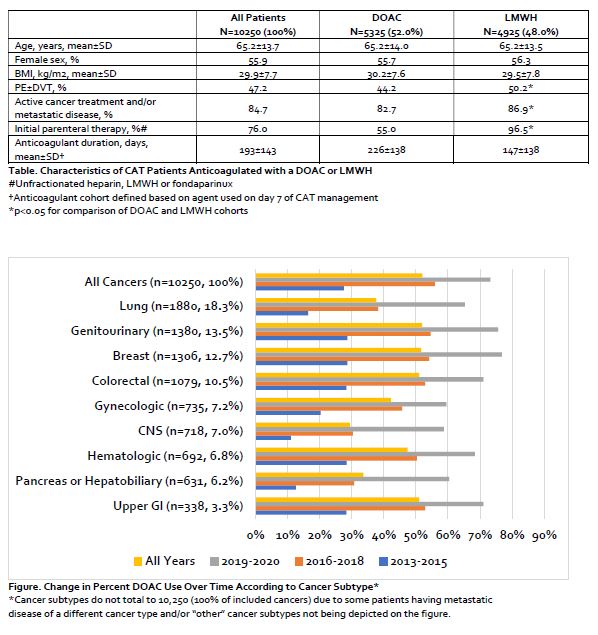