Detection of residual disease is a critical component of modern, risk-adapted therapy for Acute Myeloid Leukemia (AML). However, the genetic and phenotypic diversity of AML has made the development of a universal assay for disease assessment particularly challenging. While purely mutation-based tests promise high sensitivity, they are not broadly applicable given molecular heterogeneity and complex clonal evolution. Single-cell approaches, such as multiparameter flow cytometry (MFC), are more broadly applicable and increasingly accepted as the standard in clinical care. However, the limited number of leukemia-specific cell-surface markers and high numbers of shared markers between malignant myeloid blasts and healthy progenitors make MFC data extremely challenging to interpret. Motivated to develop a broadly applicable assay that can provide a more confident assessment of residual disease, we developed a platform using droplet-partitioned single-cell RNA sequencing accompanied by a computational pipeline specifically tailored to quantify residual disease after allogeneic HCT (alloHCT).

With bone marrow samples from an 11-year-old patient with suspected post-alloHCT relapse of AML, we interrogated three methods of sample processing, 1) RBC lysis, 2) Ficoll-centrifugation, and 3) Ficoll-centrifugation combined with CD34+ immunomagnetic selection. The samples were further split to separately capture the 3’ or 5’ end of polyadenylated transcripts. The six resulting libraries were sequenced using standard short-read sequencing, and reads were demultiplexed and counted using common workflows. Data from the samples were combined, and sub-populations were visualized using UMAP (see Figure).

This study demonstrated the feasibility of real-time single-cell sequencing for clinical utility. It is possible to process, capture, and sequence a patient’s sample in approximately three working days (A). By integrating our data with single-cell expression profiles from an atlas of healthy human bone marrow, we were able to identify cells with gene-expression programs distinct from those of normal hematopoietic cells (B). With these integrated data, we could clearly identify populations of cells that embed away from healthy atlas cells (yellow circle, B), defining a different than normal single-cell profile. This “malignant” profile also included several genes whose expression is usually restricted to healthy hematopoietic progenitors (Panel C), suggesting these cells had a severely dysregulated transcriptome. As this patient was post-alloHCT, we interrogated the abundance of single-nucleotide-polymorphisms (SNPs) in the sequence data. We quantified these SNPs in single cells to distinguish each cell as either of donor or recipient origin using a method we have previously validated for genotyping RNA sequence in single cells. We clearly demonstrate that those cells identified as “different than normal” have a distinct SNP profile suggesting they are of recipient origin. Further analysis revealed that this malignant population was highly enriched for a population of cells expressing a previously described set of “AML-restricted genes” (Huang, B. et al., ASH 2021). (Panel E). Finally, from the Ficoll-processed sample, we quantified a level of 9.8% residual disease (243 malignant cells from a total of 2487). Notably, the number of abnormal myeloid progenitors determined by MFC was 2.0% which increased to 13% on a subsequent marrow sample drawn one week later. Incidentally, we observed only minimal differences across the two single-cell sequencing chemistries (3’ vs. 5’).

Taken together, our data strongly argue that droplet-based, single-cell RNA sequencing is a feasible and powerful tool for the ascertainment of residual disease in AML. Given the robust nature of the platform and the ability to incorporate SNP integration into the analytic pipeline, it allows confident detection of residual disease in the post-alloHCT setting. By combining genomic quantification of transcripts with the power of SNP-based genotyping all at the level of the single cells, we believe this technology can substantially improve our diagnosis of post-alloHCT AML relapse. 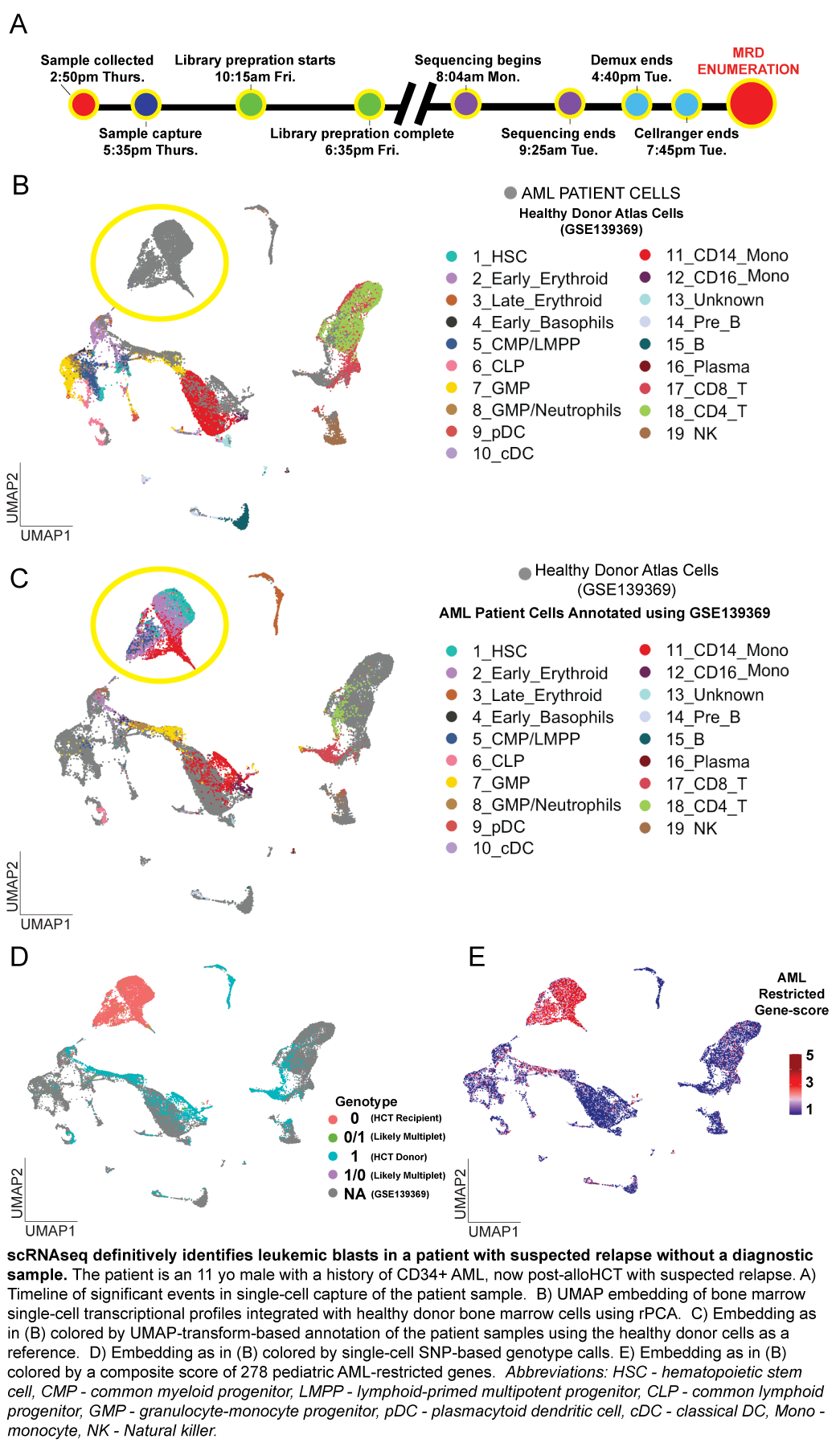