INTRODUCTION: Hypomethylating agents (HMAs) are the standard of care of patients (pts) with higher-risk myelodysplastic syndromes (MDS) and chronic myelomonocytic leukemia (CMML). HMA failure (HMA-F) is associated with poor outcomes, with a median survival of 4 to 6 months. CPX-351 is a dual drug liposomal encapsulation of cytarabine and daunorubicin at a 5:1 molar ratio approved for the treatment of pts with newly-diagnosed therapy-related acute myeloid leukemia (AML) or AML with MDS-related changes. Here we present updated results of a phase 1/2 study of lower dose CPX-351 for high-risk MDS and CMML after HMA-F.

RESULTS: At the current data cut-off of July 27th 2021 a total of 17 pts have been treated: 15 in the phase 1 portion, and 2 in the phase 2. A total of 12 pts had MDS, and 5 have CMML. Pt characteristics are shown in Figure 1a. Four (24%), 11 (64%) and 2 (11%) pts had Int-1 risk by IPSS with >10%, Int-2 or High risk by IPSS, respectively. The median age was 72 years (range 59-87) and 65% pts were male. Baseline mutations are shown in Figure 1b. The median number of prior therapies was 1 (range 1-4) with a median of 16 (range 5-50) cycles of prior HMA. Three pts had received prior therapy with venetoclax. No DLTs were observed within the 28-day DLT evaluation window of the phase 1 portion. One pt treated at the 75units/m2 dose level developed congestive heart failure with reduction in ejection fraction after cycle 2 of therapy. An additional 3 pts were included at 75units/m2 dose level with no DLTs being observed. Enrollment on the phase 2 was initiated at 75units/m2 with 2 pts treated so far. Overall, the median number of administered cycles of therapy is 2 (range 1-9). A total of 13 (76%) pts had non-hematological adverse events (Figure 1c). Eight-week mortality was 0%. Both pts in the dose-expansion cohort experienced cardiac complications including congestive heart failure without reduction in ejection fraction after cycle 2 of therapy in 1 pt, and right-sided heart failure with fluid overload after cycle 1 in 1 pt. All pts with cardiac events were >75 years of age but none had prior cardiac conditions. The median number of days from the start of cycle 1 to cycle 2 was 49 (range 28-83). Three pts required dose reductions due to cytopenias (2 at 75units/m2 and 1 at 50units/m2). All pts are evaluable for response with an overall response rate of 71% (n=12) including 6% CR (n=1), 59% mCR (n=10) and 6% PR (n=1) (Figure 1d). Four pts required re-induction prior to achieving mCR. Median number of cycles to best response was 1 (range 1-3). The median response duration was 2 months (0-10 months). Four pts (24%) proceeded to allogeneic-stem-cell transplantation after achieving response. Two (11%) pts relapsed and 2 (11%) had transformation to AML. With a median follow-up of 16.7 months, the median overall survival is 12.6 months (95% CI 4.11-21.15) (Figure 1e), and the median event-free survival is 5.0 months (95% CI 0.87-9.20) (Figure 1f).

CONCLUSIONS: Preliminary data suggests lower doses of CPX-351 in higher-risk MDS and CMML after HMA-F can induce marrow responses and be used as a bridge to allogeneic stem-cell transplant. In older individuals (>75 years), the dose of 75units/m2 is associated with risk of cardiac toxicity. Enrollment is continuing at a dose of 50units/m2. Further follow up is required for individuals <75 years of age who are transplant candidates. 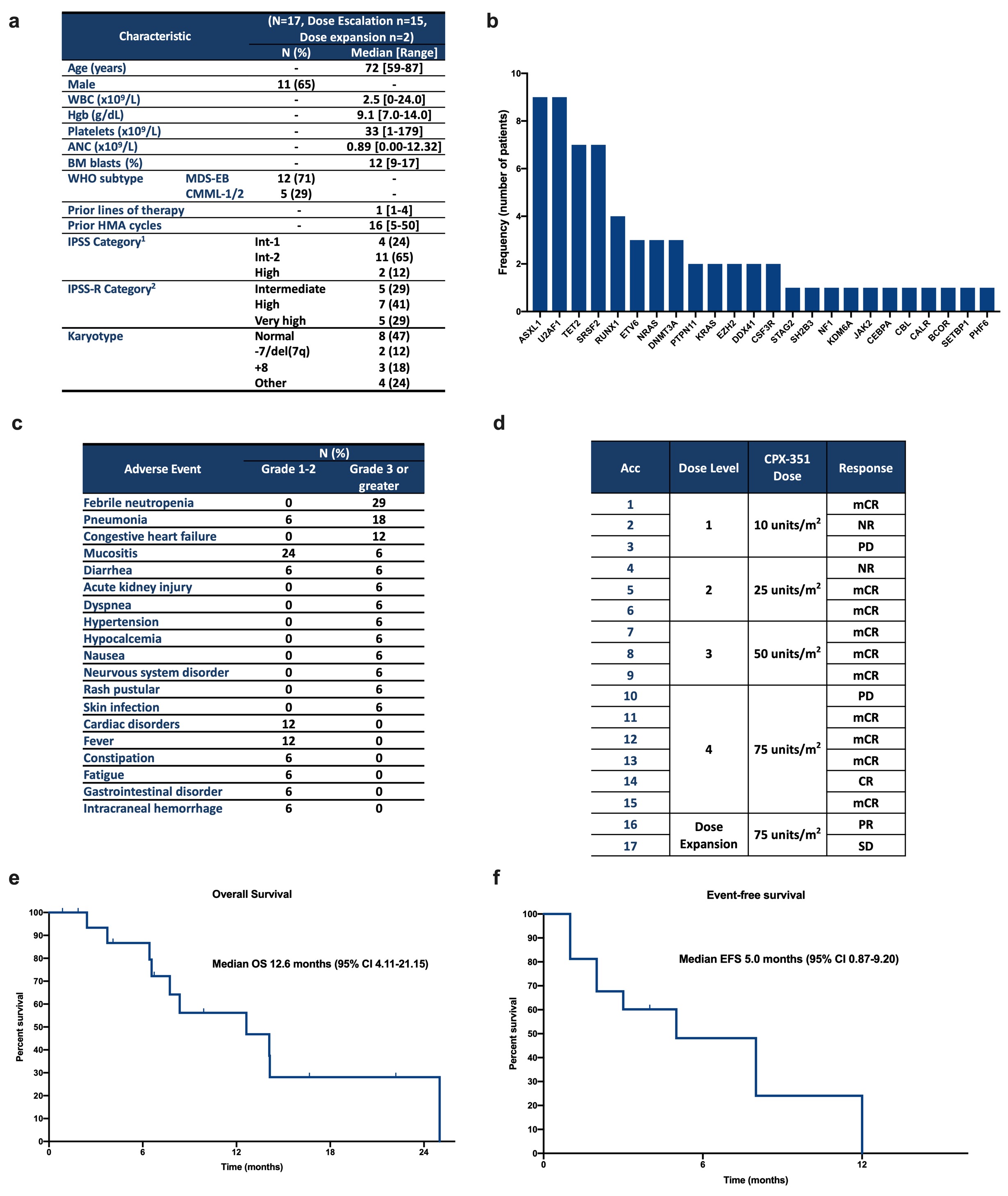