Post-transplant lymphoproliferative disease (PTLD) confers a high morbidity and mortality in a vulnerable population. We present the epidemiology and outcomes of PTLD in a large UK cohort of solid organ transplant (SOT) recipients who were transplanted over a 20-year period.

This is a retrospective study of 5365 SOT recipients who had their first transplant between 2000 and 2021 at two UK transplant centres (Addenbrooke’s Hospital and Papworth Hospital). We reviewed the records of all patients and found 142 who subsequently developed PTLD. For each type of transplant, we calculated the incidence rate of PTLD and cumulative incidence using a competing risk of death model.

Survival was compared with the age-adjusted life expectancy of the UK population using the National life tables and a landmark analysis was performed to compare overall survival (OS) of PTLD patients from the date of diagnosis with the background survival of the transplant population. To compare treatment outcomes, a subset of 90 cases of monomorphic PTLD, DLBCL subtype were identified. 66 were treated with first-line Rituximab monotherapy and 24 received first-line R-Chemotherapy. Demographics, treatment response, and survival data were analysed with univariate and multivariate analysis to identify covariates associated with death in the first year post diagnosis of PTLD.

Median OS following SOT was 16 years which is significantly reduced compared with the age-adjusted UK population. There is a relatively high early mortality rate following diagnosis of PTLD and only patients surviving two years post diagnosis regained a similar longer-term survival to the non-PTLD SOT cohort.

Treatment with rituximab monotherapy (RM) is now a standard of care for monomorphic PTLD1. Outcomes for monomorphic patients were compared between those treated with RM (n=66, median follow-up 2.2 y) and R-Chemotherapy (n=24, median follow-up 5.2 y). The two groups were well matched for age and IPI. Of the 66 RM patients, 22 (33%) achieved complete remission with RM and required no further treatment. A further 18 (27%) patients achieved remission following further treatment with chemotherapy/surgery/CTL. 6/66 (9%) patients died of progressive disease (PD), 9/66 (14%) died pre-remission of non-PTLD causes and 11/66 (17%) died in remission of unrelated causes. In the R-Chemotherapy group, 22 patients received R-CHOP and 2 received R-CVP (n=24). 8 (33%) patients are alive and in remission after first line treatment and a further 3 patients (13%) after second line treatment. 2/24 (8%) patients died of PD, 4/24 (17%) died pre-remission of non-PTLD causes and 7/24 (30%) died post-remission of unrelated causes. There is no significant difference in OS between the two groups. Only a minority of deaths were due to PD and death from non-lymphoma causes pre and post remission remain considerably higher than non-PTLD SOT patients up to 2 years post treatment (Figure 1). Multivariate analysis of all 90 monomorphic PTLD patients identified IPI3+ as the strongest pre-treatment variable associating with inferior 1 year OS. Interestingly IPI3+ did not retain this significance when R-chemo patients were analysed alone.

With this large SOT dataset we have mapped the cumulative incidence of PTLD over a 20 year period and highlight transplanted organ-specific differences in PTLD incidence over time. Treating monomorphic DLBL patients first-line with RM rather than R-chemotherapy does not appear to compromise OS, but the number of patients dying from non-lymphoma causes pre- and post-treatment remains high with both treatment approaches, with poor OS compared with age-matched non-PTLD SOT recipients. 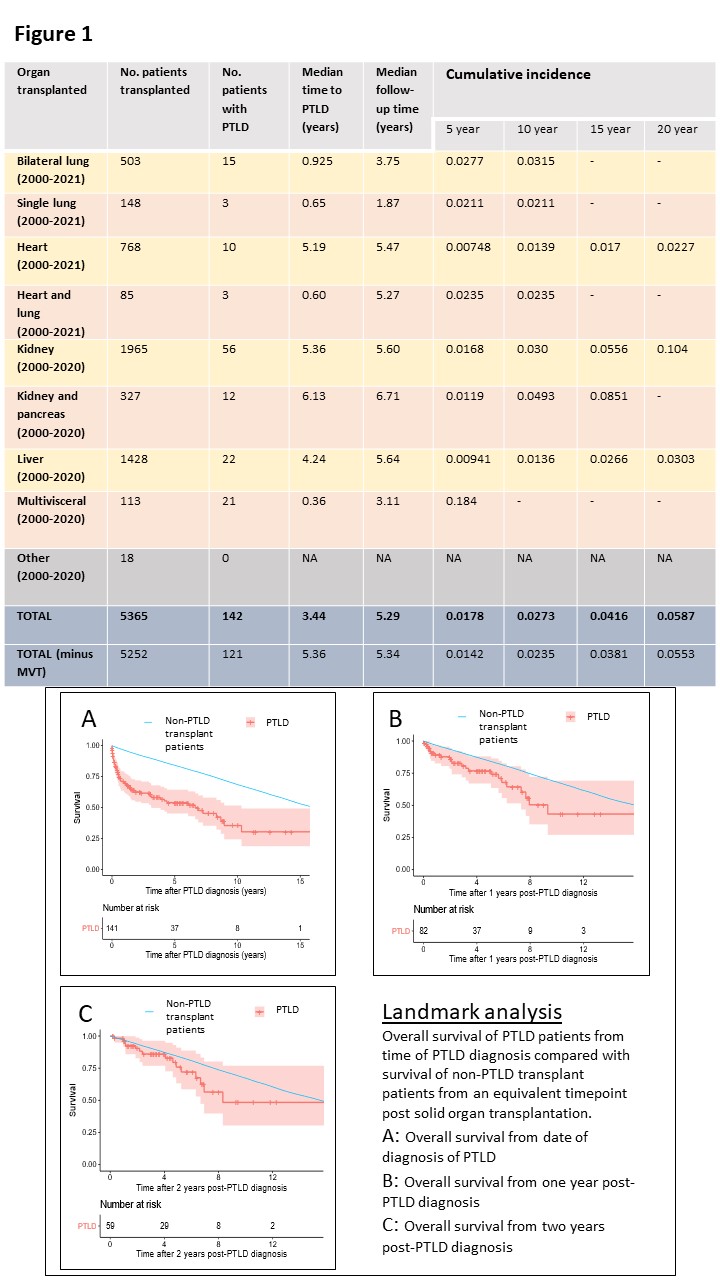