Diagnosis of pulmonary embolism (PE) using clinical decision rules in combination with D-dimer (DD) values is a standard practice. The Wells score is the most commonly used rule, either in its original (3-category) or modified (2-category) versions, and in conjunction with a (DD) <500 ng/mL allows to exclude a PE in approximately 30% of patients. The recent PEGeD study (Kearon et al. 2019) concluded that a PE can be safely excluded by using a DD threshold adjusted to the clinical pre-test probability (C-PTP). In that study PE was excluded in patients with low C-PTP and a DD <1000 ng/mL or a moderate C-PTP and a DD <500 ng/mL In the present study we aimed to evaluate the performance of the PEGeD algorithm in daily practice.

We conducted a retrospective cohort study involving all adult patients who presented at London Health Sciences Centre or St. Joseph’s Health Care Emergency Departments in London, Ontario, Canada between November 1, 2018 and December 31, 2020 with signs or symptoms suggestive of a pulmonary embolism and for whom a DD was ordered electronically. They were excluded if they did not have complete follow-up information for at least 90 days from the initial visit, they were pregnant, they were on long term anticoagulation for other indications, or had chest imaging prior to DD order. Using the electronic hospital chart, we extracted demographics, imaging results, and the Wells score with all its individual components. In our center, information about the Wells score and its components is routinely and prospectively collected when ordering DD. Since the PEGeD algorithm is not routinely used in our hospital, data of the C-PTP was utilized to determine which DD cut-off should be applied to the patient. Decision to perform imaging studies was taken by the ED physician at the time of assessment. The outcome of interest was the proportion of a PE or DVT at 90 days after the visit to the ED in patients with a low or intermediate C-PTP and who did not receive an initial diagnosis of PE and 99% confidence intervals (CI) were estimated using the Wilson’s score method.

In this cohort we found that if the PEGeD algorithm had been used, it would have resulted in a low risk of VTE during follow up in patients without an initial diagnosis of PE and who had either a low C-PTP and a DD <1000 ng/mL or a moderate C-PTP and a DD <500 ng/mL. We also found it would have been associated with 194 (48%) less diagnostic imaging studies in the low C-PTP range and 2 (6%) less studies in the intermediate C-PTP range. Despite this, 1% of patients with PE (99% upper confidence limit 2.43%) would have been missed. This study is limited by its retrospective nature with an inherent risk of misclassification. Further studies are needed before recommending the use of this algorithm in clinical practice. 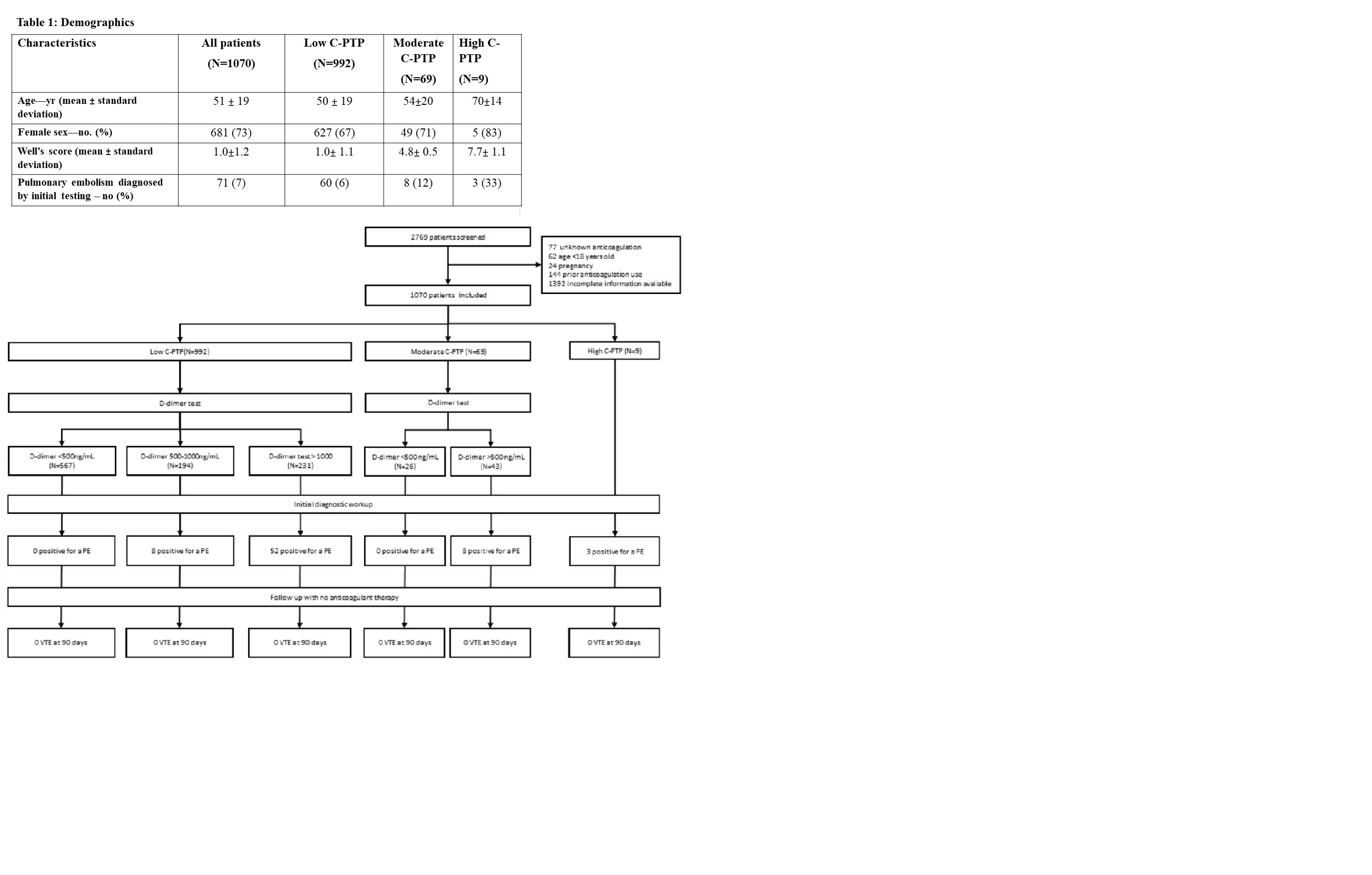