2088 Daratumumab As a Treatment for Adult Immune Thrombocytopenia: A Phase II Study with Safety Run-in (the DART Study)

Background: Immune thrombocytopenia (ITP) is characterized by antibody-mediated platelet destruction and impaired platelet production. Residual long-lived autoreactive plasma cells may be a source of treatment resistance in autoimmune cytopenias. Antiplatelet-specific plasma cells have been detected in the spleen of the rituximab refractory ITP patients. These cells can also migrate and reside in bone marrow as long-lived plasma cells.

We hypothesized that long-lived autoreactive plasma cells may be the source of treatment failure in some ITP patients. Based on that, we initiated a multicenter, open-label, dose-escalating phase II study with a safety run-in to evaluate the safety and efficacy of daratumumab in patients with ITP (NCT04703621). The first 3 patients were included in the safety run-in during Jan - May 2021.

Main inclusion criteria include age ≥18, primary ITP with a platelet count of ≤30X109/L, failure of corticosteroid therapy, and at least one second-line therapy including rituximab and/or TPO-RA.

The primary endpoint is a platelet count >50x109/L in 2 measurements 12 weeks after treatment initiation for cohort 1, and 16 weeks for cohort 2, without rescue therapy after week 8. Safety will be assessed by the incidence and severity of adverse events. Secondary endpoints will include the number of weeks with platelet count >50x109/L between the end of treatment and end of study without rescue therapy or dose increments of corticosteroids. Time to treatment failure (TTF) is defined as time to first platelet count <30x109/L or administration of any platelet elevating therapy after achieving response.

Exploratory endpoints include: role of anti-GPIIb/IIIa and Ib antibodies; serial characterization of various subsets of immunocompetent cells in the bone marrow and blood; measurement of HRQoL and fatigue

Statistics: The primary outcome (treatment response) will be reported separately for each cohort and the entire study population, expressed by absolute numbers and rates with the corresponding 95% confidence interval. Daratumumab treatment will be considered “successful” if we observe a response rate of 30% or higher.

Current enrollment status: As of July 10, 2021, 2 sites are open. Two patients have completed the safety run-in; one is close. One/two responded to treatment at week 12. Platelet response in all 3 patients is shown in Figure 1. No serious or grade 3 adverse events were reported. Cohort 1 will start in August 2021. 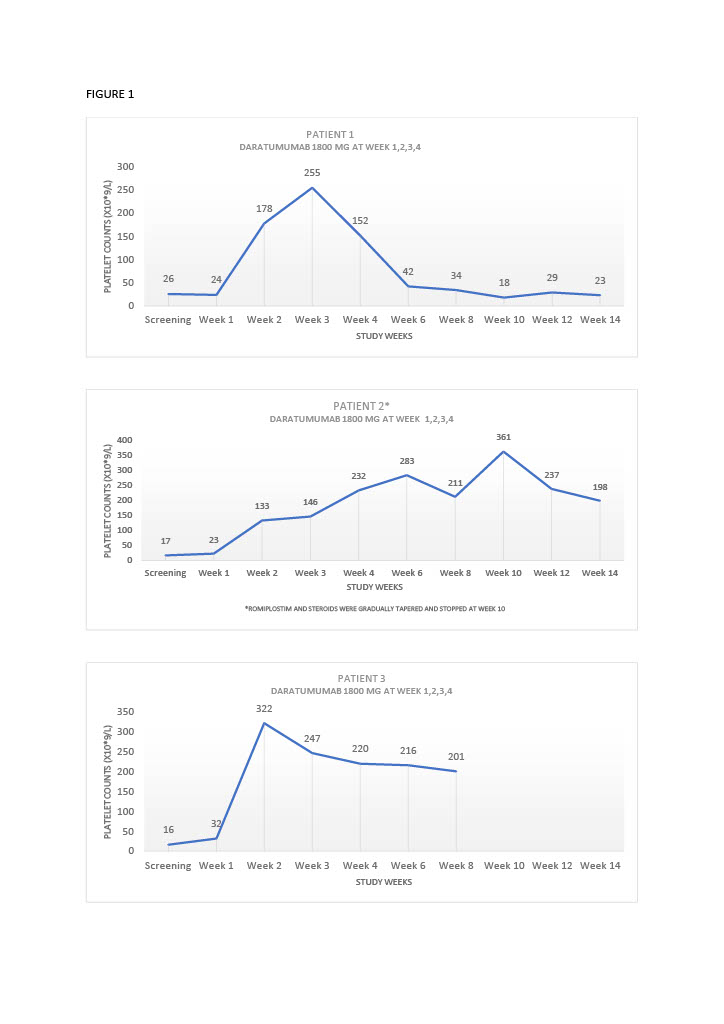