4064 COVID-19 and Sickle Cell Disease in the Province of Quebec: Morbidity and Mortality Rates Derived from the Provincial Registry

Approximately 1500 people live with sickle cell disease (SCD) in the province of Quebec, Canada. Public health has recognized these patients as immunocompromised. SCD patients may be at higher risk of developing severe COVID-19 infection due to their underlying pro-inflammatory and thrombogenic state, splenic dysfunction and secondary organopathies. Descriptions about disease severity and mortality rates in SCD vary widely. From the SECURE-SCD registry, Mucalo et al. recently reported a 0.3% and 4.7% mortality rate in children and adults, respectively. In the French registry, Arlet and colleagues reported a 2.4% death rate among those hospitalized with COVID-19 and SCD, not different from the general population. As a result, the COVID-19 morbidity and mortality rates among the SCD population remain uncertain.

The primary objectives of our study are to describe the epidemiology, baseline characteristics and clinical outcomes of SCD patients with COVID-19 infection in the province of Quebec. In addition, we aim to identify risk factors for hospitalization and severe forms of COVID-19.

We built a web-based SCD-COVID-19 registry regrouping 7 adult and 4 paediatric tertiary care hospitals in the province of Quebec in June 2020. All SCD patients with a confirmed SARS-CoV-2 infection by PCR test were included in the study. We compared the prevalence of infection and hospitalization rates of SCD patients to the general population of Quebec using the epidemiological data from the INSPQ (National Institute of Public Health of Quebec) public database. We retrospectively analyzed data included between March 11, 2020 to March 1, 2021. Relative risk was calculated using bilateral association measures (exact fisher, mid-p or chi-squared tests, as appropriate) to compare the incidence of infection and hospitalization of SCD patients to the population of Quebec and to assess risk factors of hospitalization among SCD patients.

During the first 12 months of the pandemic, 74 patients were included in the registry. The male to female ratio was 1:1.12. Median age was 23 years, ranging from 8 months to 68 years old. SS-Sbeta0 genotypes were present in 51% of cases, while 49% were SC or Sbeta+. The majority of patients were on disease modifying therapy: 54% were on hydroxyurea and 17.5% on exchange transfusion therapy. The incidence of reported COVID-19 infection was significantly higher in SCD patients compared to the general population (4.9% vs. 3.5% p=0,002) (Table 1). Even more strikingly, SCD had rate of hospitalization 10-times greater than the general population (33.8 vs 3.2%, p<0,001). Nevertheless, the risk of admission to the intensive care unit was similar between SCD patients and the general population (24.0% vs. 24.1%, p=0.99). No death was recorded amongst SCD patients with COVID-19 compared to a death rate in the general population in Quebec of less than 70 years old of 48-78 for 100 000 infections (male-female).

A history of acute chest syndrome (ACS) in the last year (OR 2.6 [1.5-4.6], p=0.04) and arterial hypertension (OR 3.3 [2.3-4.8], p=0.01) were associated with a higher risk of hospitalization (Table 2). On the other hand, there was no statistically significant association with age, sex, genotype, ABO blood group, baseline SCD therapy, or other comorbidities (chronic renal disease, obesity, pulmonary hypertension, chronic lung disease and previous admission to ICU) in our cohort.

Similar to other reports, we found that SCD patients were at much greater risk of hospitalization compared to the general population. We however found no increased risk of mortality or disease complication. This contrasts with results from other registries. A history of ACS and hypertension were associated with a higher risk of hospitalization. Whether social determinants of health could explain some of the outcome variability between different countries merit further investigation. Furthermore, we believe that registries are critical to monitor the impact of preventive measures. As vaccination is ongoing, it will be important to consider its impact on hospitalization and death rate among SCD population. Recruitment to the registry is ongoing and updated data will be presented at the meeting. 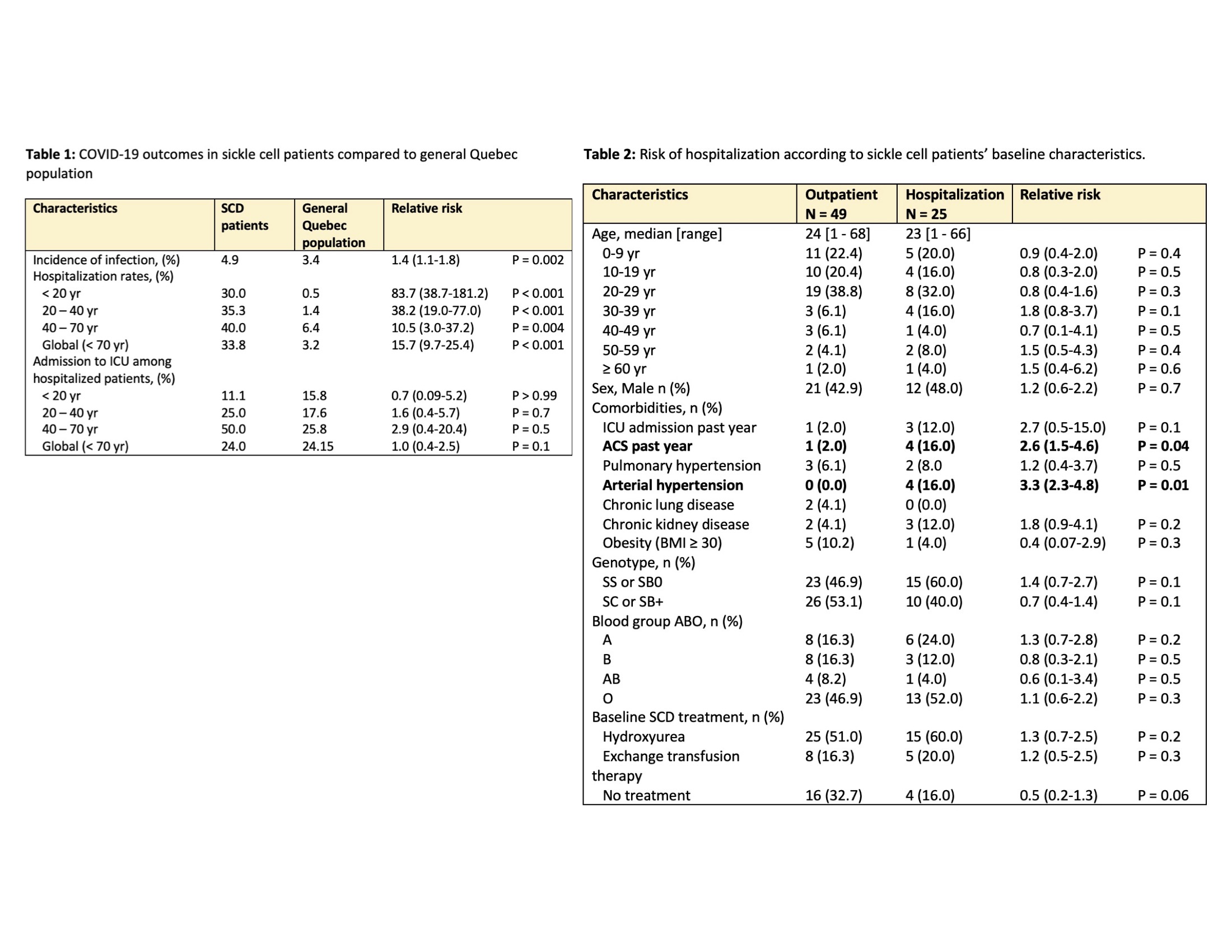