Acknowledgements: This work was funded by the following NIH/NCI/NCTN grant awards: RO1CA190661, R01CA160872, U10CA180888, U10CA180819, U24CA196175. The authors wish to gratefully acknowledge the importantcontributions of the late Dr. Stephen H. Petersdorf to SWOG and to the study S0106. The authors would like to acknowledge that a portion of the specimens were obtained from the Fred Hutch/University of Washington Hematopoietic Disorder Repository.

AML is a molecularly heterogenous disease that harbors multiple genomic, epigenomic, and transcriptomic abnormalities. Despite the use of newer therapeutic agents and identification of multiple prognostic markers, most patients with AML still relapse or succumb to their disease. Understanding biological factors that determine relapse is of major clinical interest in AML. Proteins are responsible for much of the functional biology of the cells. However, few studies have examined the global proteome in AML, and, to our knowledge, studies have not previously examined the proteome in highly enriched undifferentiated AML blasts. Therefore, we have developed an integrated approach utilizing mass spectrometry-based proteomics and leveraging next generation RNA sequencing (RNAseq) to identify novel protein biomarkers associated with clinical outcome in a homogeneous population of undifferentiated viable leukemic blasts (uVLBs) from AML patients. Cryopreserved specimens from previously untreated de novo AML patients (n=27) were obtained from the SWOG Leukemia Repository. Patients were treated with dose intensive induction and consolidation as part of SWOG-9031, SWOG-9333, S0106, and S0112 studies. uVLBs were isolated from specimens using fluorescence-activated cell sorting (FACS). Targeted genome sequencing examined for genomic mutations in uVLBs, while global RNA sequencing (RNAseq) and tandem mass tag labelling followed by liquid chromatograph with tandem mass spectrometry (TMT-LC-MS/MS) were used to quantify transcript and protein expression, respectively. Analyses identified 6761 unique proteins, with 238 and 460 proteins significantly associated with complete response (CR) and overall survival (OS), respectively. There was modest overlap between the prognostically significant transcript and protein biomarkers (Figure 1). We also were able to identify and quantify aberrant proteins arising from genomic mutations. Examples of the “neoproteins” detected included proteins harboring NPM1 mutations (Figure 2a) and those harboring frameshift insertions/deletions in the terminal region of RUNX1 (Figure 2b).

For validation of prognostic associations, we examined the proteome in an independent population of de novo AML patients (N=27) treated at the Fred Hutch and University of Washington. As with the SWOG patients, pre-treatment specimens were obtained from patients receiving intensive induction and consolidation with curative intent; however, OS data was not available for many of these patients. As such, the validation studies focused on CR. Patients were randomized by CR response into 9 pools (CR=6 and no CR=3 pools), and specimens were sorted for uVLBs. TMT-based LC-MS/MS quantified protein expression across pools, and analyses examined the prognostic significance of the 238 proteins from the SWOG analyses associated with CR. Thirteen of the most promising candidates were significantly associated with CR prognosis (Table 1), many of which are associated with cancer biology.

Together, these studies show the feasibility and biological importance of examining the proteome in uVLBs. Studies examining for biomarkers in the proteome may be a powerful tool to uncover novel prognostic biomarkers that would otherwise not be identified by examining the genome or transcriptome. Furthermore, the multi-omics approach can be used to confirm the translation of potential neoantigens into actionable protein targets, which may lead to more cost-effective mechanisms for the development of innovative adoptive immunotherapies. 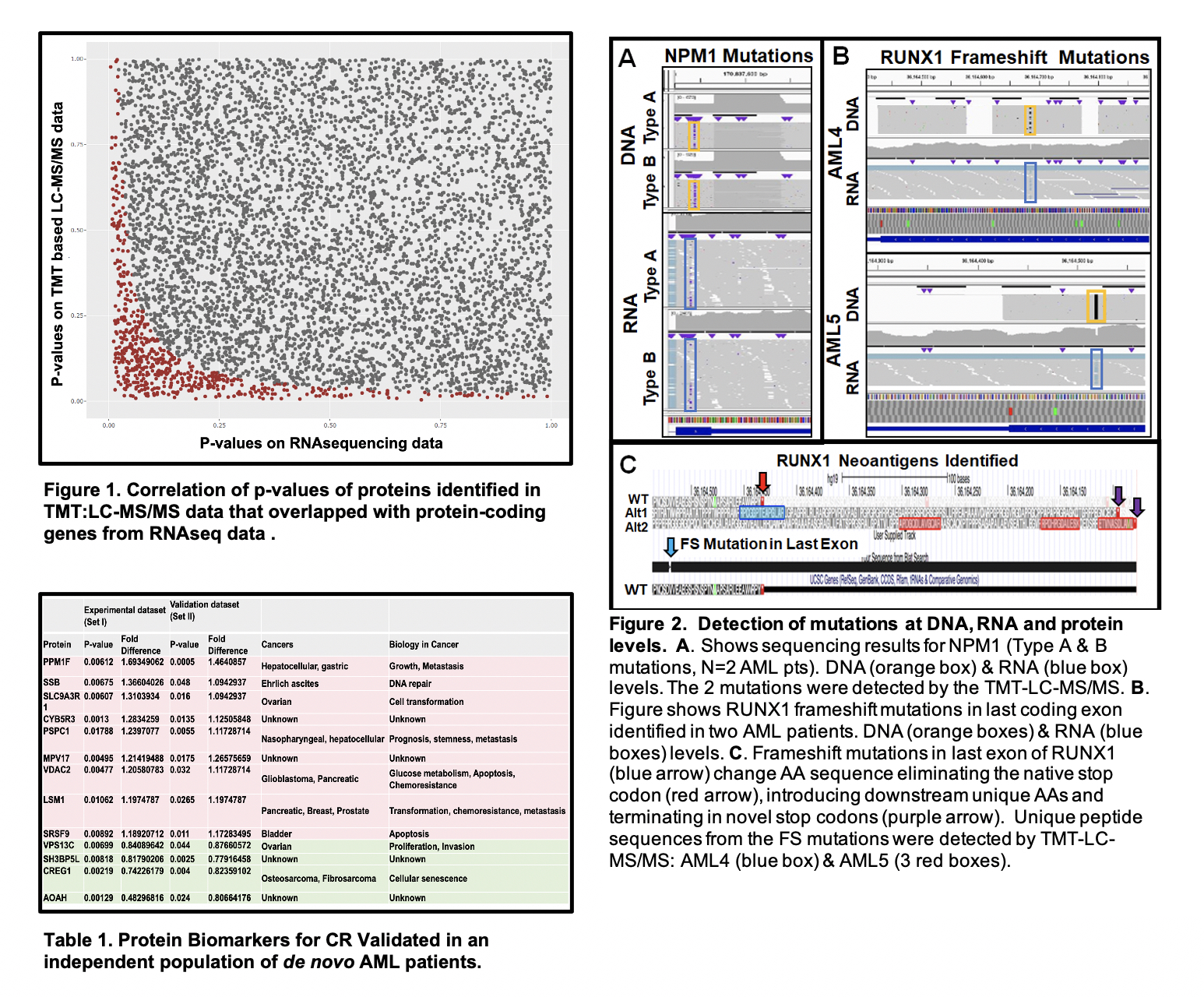