Introduction: The licenced starting dose of bosutinib is 400 mg QD for first line therapy and 500 mg QD in later lines in CML. Gastrointestinal (GI) adverse events (AE) are observed in up to 90% in similar patient cohorts (BYOND, Hochhaus et al; Leukemia 2020). The goal of this study was to evaluate whether a bosutinib step-in dosing regimen decreases GI toxicity while maintaining optimal efficacy in patients (pts) with CML after failure or intolerance to 2G-TKIs.

Methods: This is the first and final analysis of the BODO “Bosutinib Dose Optimization Study” trial (NCT02577926), which is a multicenter, open-label single arm phase II study testing tolerability and efficacy of 2nd& 3rd line bosutinib step-in dosing in chronic phase CML pts intolerant and/or refractory to previous imatinib, and/or nilotinib, and/or dasatinib therapy. Bosutinib was commenced with 300 mg QD and was (in the absence of >G1 toxicities) dose-increased by increments of 100 mg daily dosing every 14 days if applicable up to a maximum dose of 500 mg QD. The primary endpoint (PE) was the incidence of grade 2 to 4 GI toxicity AEs within 6 months after registration. 127 pts were planned to be recruited. However, due to slow recruitment, the trial had to be stopped prematurely after inclusion of 57 pts. The 95% confidence interval (CI) around the estimated rate of the PE was calculated in accordance with Clopper and Pearson.

Results: Pts´ characteristics are presented in Table 1. 23 (40.4%) pts were intolerant, 20 resistant (35.1%), and 14 (24.6%) both intolerant and resistant to previous TKI treatment. 20 (35.1%) pts entered the study in molecular response (at least MMR at screening). The probability of MMR after 24 months of treatment was 79% (95% CI: 65.8% to 87.5%); probabilities of MMR, MR4, MR4.5 are shown in Figure 1. Six out of 7 intolerant pts without MMR at baseline reached MMR or better molecular response with bosutinib. Thirty pts were refractory to previous therapy (19 being resistant; 11 being resistant and intolerant) lacking baseline MMR, of which 19 pts achieved MMR or better (2 pts with MR4.5, 2 with MR4 and 15 with MMR). Eight out of 30 pts did not achieve MMR and 3 experienced complications (2 pts with SAEs that led to discontinuation and 1 death). No patient progressed to accelerated/blast phase on treatment. Two pts died (1 CML progression (no MMR with bosutinib, death 6 months after allogenic stem cell transplant); 1 cerebral cavernoma unrelated to bosutinib).

The PE was evaluated for 50 out of 57 pts (4 pts with treatment < 14 days + 3 pts with observation < 6 months were excluded from the analysis). Twenty pts did not develop any clinically relevant GI-toxicity during the first 6 months. Thus, the rate of GI-toxicity (grade 2 to 4) within the first 6 months of treatment was 60.0% (95% confidence interval: 45.2% to 73.6%), accordingly, the alternative hypothesis of the trial (GI-toxicity was assumed to be less than 40%) could not be accepted. However, only in 1 patient GI-toxicity led to discontinuation. Twenty-five pts discontinued bosutinib prematurely (17 due to AEs; 5 with insufficient response; 3 with other reasons).

Conclusion: This is 1 of the largest cohorts published on the efficacy and safety of bosutinib after intolerance/failure to first-line 2G-TKIs. Given the limitations of a single-arm study with incomplete recruitment, we could not demonstrate an advantage of the step-in dosing concept chosen here to reduce the frequency of grade 2-4 GI toxicity overall. However, using this regimen, bosutinib was able to induce optimal responses in almost two thirds of pts previously resistant to 2G-TKIs while GI toxicity rarely led to treatment discontinuation. We conclude that treatment with bosutinib is safe (rates of AEs being similar to other trials (e.g. BYOND)) and efficacious as 2nd and 3rd line therapy after failure of previous 2G-TKI therapy whereas an advantage of run-in dosing regimens remains to be proven. 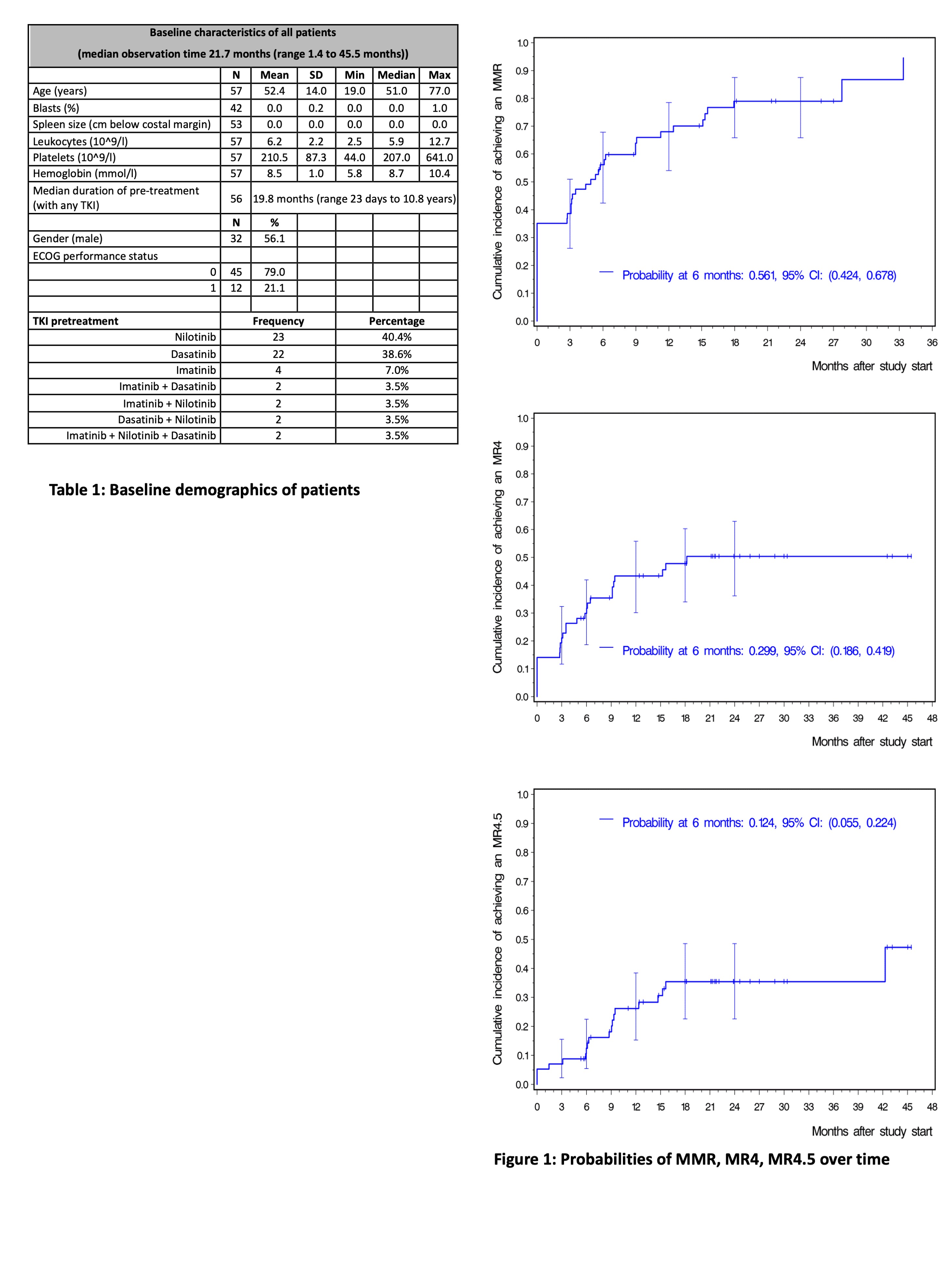