Background: Generalizability of results from clinical trials with narrow in-/exclusion criteria are a concern as significant deviations in efficacy or toxicity may occur when treatments are used in populations of elderly and more comorbid patients. The cost-effectiveness of novel therapies may also be less favorable if real-world treatment effects are inferior to clinical trial results. In diffuse large B-cell lymphoma (DLBCL), a recent US study showed that baseline organ function–based eligibility criteria had substantial impact on survival with ineligible patients being at higher risk of dying from progressive lymphoma (1).

First, high-level trial matching on disease risk group (Ann Arbor, bulky disease, international prognostic index (IPI)) and age-groups were performed so that patients assessed for trial eligibility had a relevant risk profile. Subsequently, patients were divided into eligible or ineligible based on selected in/exclusion criteria. For each trial, overall survival (OS) from treatment start were compared for eligible and ineligible patients using inverse probability of treatment weighted Kaplan-Meier and log-rank tests. Crude OS and OS adjusted for residual imbalances in IPI and age were estimated. When possible, the OS curves from standard arms of the original trials were superimposed on OS plots. For each trial, the Shapley value of each criterion was calculated, using the HRs as well as the 5y restricted loss of lifetimes (RLOLs). The Shapley value measures the average influence of each eligibility criterion on the estimated IPI- and age-adjusted HR/5y RLOL.

Results: A total of 3,150 R-CHOP treated DLBCL patients without discordant low-grade lymphoma were identified in the surveyed period. A total of 1,666 patients (52.89% of surveyed population) were available for the REMoDL-B trial, 1,431 (45.43%) for Goya, 1,125 (35.71%) for Polarix, and 1,432 (45.46%) for Hovon84. The variations of numbers for each trial evaluation were explained by trial inclusion criteria and missing data in LYFO. Crude OS estimates for patients with and without all necessary information were similar (data not shown).

Conclusions: The present population-based study confirms that trial ineligible patients have worse survival even after adjustments in imbalances in age and disease risk category. Thus, trial eligibility criteria have substantial impact on generalizability of results to a wider unselected population. Interestingly, the trial eligible patients identified in the present study had very similar outcomes to R-CHOP treated patients in the original trials supporting the possible use of RWD as synthetic control arms. 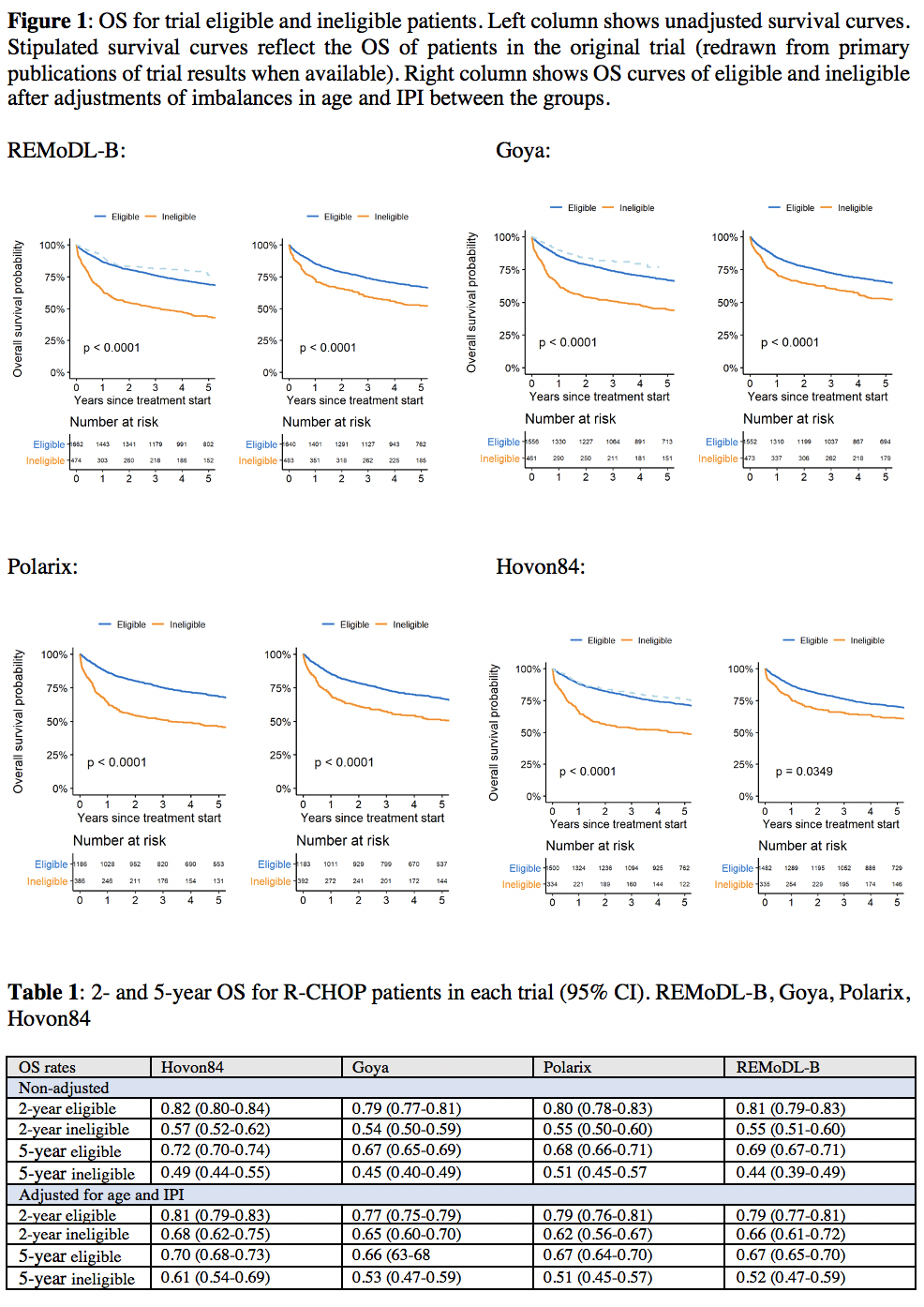