3890 Post-Transplant Cyclophosphamide in Acute Leukemia Patients Receiving More Than 5/10 HLA-Mismatched Allogeneic Stem Cell Transplantation: A Study on Behalf of the ALWP of the EBMT

The purpose of this retrospective multi-center study is to evaluate PTCy-based GvHD prevention for patients with acute leukemia receiving a traditionally prohibitive highly mismatched HSCT and to describe their outcome.

This is a registry-based study employing the data set of the Acute Leukemia Working Party (ALWP) of the European Society of Blood and Marrow Transplantation (EBMT). We retrospectively assessed the outcome of adult patients with acute myeloid or lymphoblastic leukemia (AML/ALL), transplanted between 2010 and 2020 with grafts from HLA-mismatched donors with more than 5/10 mismatches using PTCy-based GvHD prophylaxis.

The study cohort consisted of 59 patients, with a median time of follow up of 20 (95% CI, 14-39) months. The median age was 47 (range, 18-69) years. Forty-four patients had a diagnosis of AML, 14 of ALL and one case of mixed phenotype acute leukemia. At time of transplant, 39 (66%) were in first or second complete remission, 4 (7%) were in later remission and 16 (27%) had active, relapsed or refractory, disease. Conditioning regimens were myeloablative for 54% of cases and peripheral blood was the preferred source of stem cells (64%). All donors were related. Most patients (85%) received a 4/10 HLA-matched transplant, the most commonly mismatched loci were C and DQB1, often with a double mismatch involving the same locus. Two cases of fully mismatched donors were also recorded.

PTCy was always associated with other immunosuppressive treatments, especially with the standard combination of calcineurin inhibitors and mycophenolate mofetil. In only 8 cases in vivo T-cell depletion was realized with anti-thymocyte globulin.

A large proportion of patients (86%) attained engraftment with a median time of 19 (range, 11-37) days. Only 8 patients did not reach engraftment and all of them died of infection or disease relapse in the first one-hundred days (range, 6-99) after HSCT.

Twenty-four patients died during the study period, mostly because of leukemia progression (n=13, 54%), infectious complications (n=6, 25%) and interstitial pneumonia (n=2, 8%). Other causes of death were hemorrhage, GvHD, and another non HSCT-related that accounted for one case (4%) each. At 2 years, the overall survival (OS), leukemia-free survival (LFS), and a GVHD and relapse free survival (GRFS) were 56%, 54% and 47% respectively. Rates of relapse incidence and non-relapse mortality were 28% and 19%, respectively.

According to this preliminary data overview, transplantation in a highly mismatched framework is possible, without unfavorable OS, LFS and GVHD rates. Despite the important limitation of the retrospective non-controlled nature of this analysis, these findings suggest that PTCy-based strategies could help overcome the barrier of HLA-matching and configure a new setting of transplantation, encouraging more in-depth investigations. 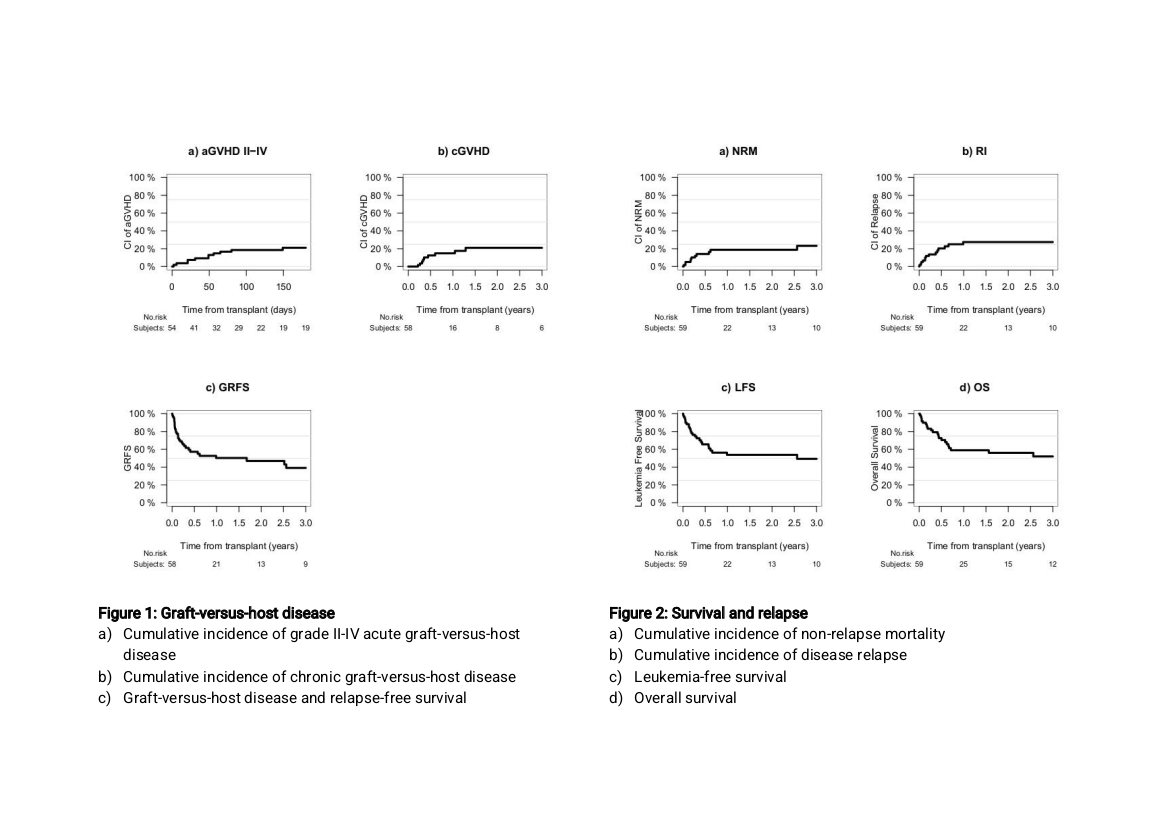