2127 Impact of Compliance on Elastic Compression Stockings Efficacy to Prevent Post-Thrombotic Syndrome: A Prespecified Analysis of the Celest Double-Blind Study

Introduction: Elastic compression stockings (ECS) are commonly used for the prevention of post-thrombotic syndrome (PTS) after deep venous thrombosis (DVT). However, their efficacy is controversial. While two open-label studies reported a 50% risk reduction of PTS in the ECS vs. no-ECS groups, a large double-blind study didn’t find any benefit of ECS vs. placebo-ECS to prevent PTS. These opposite results could be explained either by a placebo effect in the open-label studies or to a lack of compliance to study ECS in the double-blind study. Additional data on the impact of compliance on ECS efficacy, obtained in a double-blind way, are therefore needed.

Methods: We analyzed data from the French, CELEST, multicentre double-blind trial comparing 25mmHg ECS vs. 35mmHg ECS to prevent PTS at 2 years after a first symptomatic ipsilateral proximal DVT (NCT01578122). All CELEST patients who had complete data for primary outcome (i.e. PTS, defined as a Villalta score ≥5 on the DVT affected leg at the one- or 2-year follow up visit) were included. The objectives of this predefined analysis were to: i) compare the incidences of PTS at 2 years according to compliance to ECS (irrespective of allocated treatment group) during the first 3 months of treatment and during the 2-year follow-up; ii) assess independent predictors of PTS using a stepwise multivariable model including all of the following variables (baseline patients’ and DVT characteristics, anticoagulant treatment and compliance to ECS) if they achieved a p value of 0.2 or less in univariate analysis as well as ECS strength allocation group; iii) build an induction tree algorithm to measure the impact in terms of incidence of PTS of each of the independent predictor of PTS. Compliance to ECS was defined as reasonable and optimal if the patient had worn the study ECS more than 50% and more than 80% of the time respectively and had a modified GIRERD score of 0-2.

Conclusions: In our double bling study assessing 25mmHg vs. 35mmHg ECS to prevent PTS, compliance to ECS was a significant independent predictor of PTS in our multivariable model. Impact of ECS use became apparent when patient used ECS at least 50% of the time without any strong benefit beyond. Wearing study ECS>50% of the time was associated with 2-fold decreased risk of developing PTS, which is consistent with the results from previous ‘positive’ open-label studies. It suggests that use of ECS influences the risk of developing PTS. Our induction tree algorithm evidences that being compliant with ECS seems particularly beneficial in - non-obese - patients with extensive DVT. 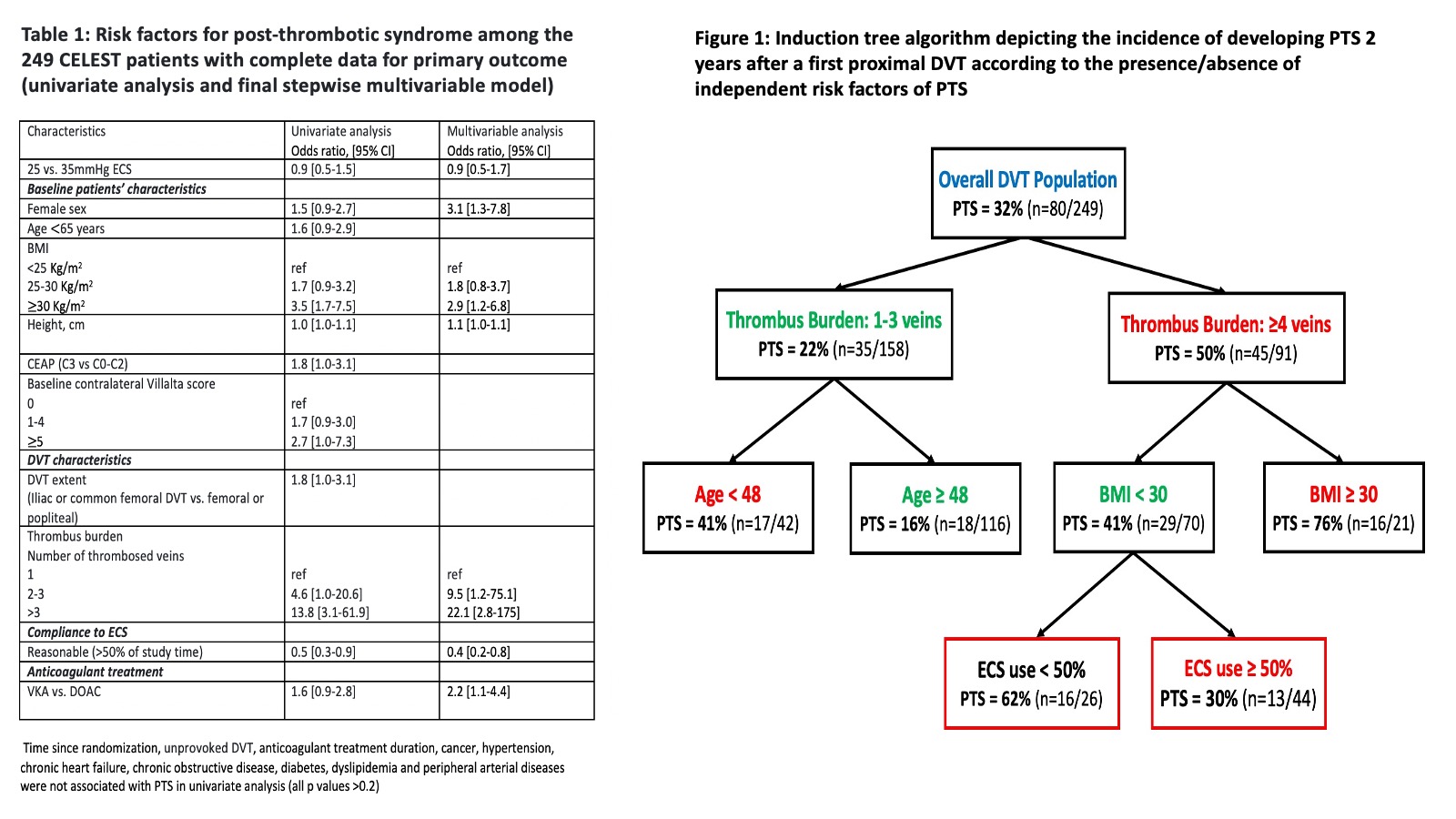