Clonal hematopoiesis of indeterminate potential (CHIP) occurs when hematopoietic stem cells (HSCs) acquire a mutation, most commonly a null variant in TET2 or DNMT3A, that confers a selective advantage. Blood cancers may result if additional cooperating mutations are acquired. However, CHIP may also cause atherosclerosis and other inflammatory diseases because these mutations alter the function or development of effector immune cells derived from the HSCs. Genome-wide association studies have implicated microglia, the resident myeloid cells in the brain, as key players in the biology of Alzheimer’s disease (AD). Here, we asked whether CHIP associated with AD dementia or neuropathologic change, and whether mutant marrow-derived cells could be found in the brains of CHIP carriers.

To test for an association, we used data from the Trans-omics for Precision Medicine project (TOPMed) and the Alzheimer’s Disease Sequencing Project (ADSP), where whole genome or exome sequencing data as well as AD phenotype data was available on 5,730 persons. TOPMed contained population-based cohorts unselected for AD, while ADSP was a case-control study for AD. We surprisingly discovered that the presence of CHIP was associated with a reduced risk of AD dementia in both projects (fixed-effects meta-analysis odds ratio 0.64, p = 3.0 x 10-5, adjusted for age, sex and APOE genotype) (Figure 1). The protective effect of CHIP was strongest in those with APOE e3 or e4 alleles, but not seen in those with APOE e2 allele. No substantial differences in AD risk were seen based on mutated driver gene. In addition, the presence of CHIP was associated with a reduced burden of amyloid plaques and neurofibrillary tangles in the brains of those without dementia. In sum, our human genetic analyses indicated that CHIP was robustly associated with protection from AD dementia and AD-related neuropathologic changes.

A causal link between CHIP and AD would be strengthened by finding the mutated cells infiltrating the brain. However, it is presumed that bone marrow progenitors have minimal contribution to the adult microglial pool. To determine if the mutations seen in the blood of CHIP carriers could also be found in the brain, we obtained 8 occipital cortex samples from autopsy of donors with CHIP, 6 of whom were cognitively normal at the time of death. The 8 CHIP carriers had mutations in DNMT3A, TET2, ASXL1, SF3B1, and GNB1 with the highest frequency in DNMT3A and TET2, which is representative of the relative proportion of these mutations in the general population. We detected the CHIP somatic variants in the microglia enriched (NeuN- c-Maf+) fraction of brain in 7 out of 8 CHIP carriers, with a VAF ranging from 0.02 to 0.28 (representing 4% to 56% of nuclei) (Figure 2), but at low levels or absent in the other fractions of brain. We then performed single-cell ATAC-sequencing on brain samples from 2 CHIP carriers and 1 control to specify the cellular population harboring CHIP mutations. This revealed that hematopoietic cells in the 3 samples formed a single myeloid cluster that had accessible chromatin at the microglia marker genes TMEM119, P2RY12, and SALL1, but not in genes specific to monocytes or dendritic cells. We further determined that the proportion of cells in this cluster bearing the CHIP mutations ranged from ~40-80% in these two samples, indicating widespread replacement of the endogenous microglial pool by mutant cells.

We show here that, unexpectedly, the presence of CHIP is associated with protection from AD dementia. CHIP is also associated with lower levels of neuritic plaques and neurofibrillary tangles in those without dementia, indicating a possible modulating effect of CHIP on the underlying pathophysiology of AD. Consistent with this hypothesis, we also detect substantial infiltration of brain by marrow-derived mutant cells which adopt a microglial-like phenotype. We speculate that the mutations associated with CHIP confer circulating precursor cells with an enhanced ability to engraft in the brain, to differentiate into microglia once engrafted, and/or to clonally expand relative to unmutated cells in the brain microenvironment. These non-mutually exclusive possibilities could provide protection from AD by supplementing the phagocytic capacity of the endogenous microglial system during aging. 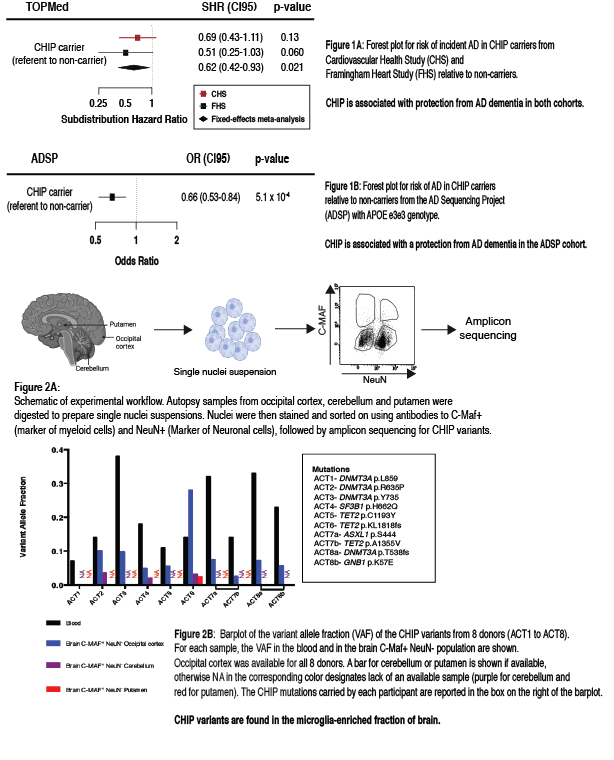