527 Efficacy and Safety of Umbralisib, Ublituximab (U2), and U2 Plus Bendamustine in Patients with Relapsed or Refractory Diffuse Large B-Cell Lymphoma (DLBCL)

Background: Patients with relapsed or refractory (R/R) DLBCL generally have a poor prognosis, particularly if they are not candidates for autologous stem cell transplantation (ASCT) or experience relapse following approved CAR-T therapies. The UNITY-NHL study systematically explored the efficacy and tolerability of the PI3K-d/CK1-e inhibitor, umbralisib, alone (umbra), and in combination with the glycoengineered anti-CD20 monoclonal antibody ublituximab (U2), followed by a cohort treated with U2 plus bendamustine (U2+benda). Herein we report on the experience in a large cohort of patients with R/R DLBCL.

Methods: This study explored a sequential combination design as described above. Eligible patients had histologically confirmed R/R DLBCL and were ineligible for ASCT, with no limit on number or type of prior treatment. Umbra was given orally at 800 mg once daily in 28-day cycles (C) until disease progression or unacceptable tolerability. Ublituximab was administered intravenously (IV) on Days 1, 8, and 15 of C1, on Day 1 of C2-6, and on Day 1 every 3C through C24. Benda was administered IV (90 mg/m2) on Days 1/2 of C1-6. Cell of origin, NGS, and c-myc (FISH) were analyzed centrally. The primary endpoint of the study was overall response rate (ORR) as assessed by an independent review committee. Secondary endpoints included duration of response, progression-free survival, time to response, and safety.

Results: 226 patients with DLBCL were enrolled as follows: umbra monotherapy (n=30), U2 (n=66), and U2+benda (n=130). The population demographics included the following features: median age was 72 years (range 32-95); 59% were male; 64% of patients had stage III or IV disease; 58% were refractory to their immediate prior therapy; and the median number of prior therapies was 2 (range 1-8). There were no substantive differences in these characteristics across cohorts.

Conclusions: In the DLBCL cohort of UNITY-NHL, the U2+benda triplet regimen was active and well tolerated in patients with R/R DLBCL who were unsuitable for transplant or who had relapsed following ASCT. Umbra monotherapy and U2 were also well tolerated but resulted in lower ORR than in the U2+benda cohort. 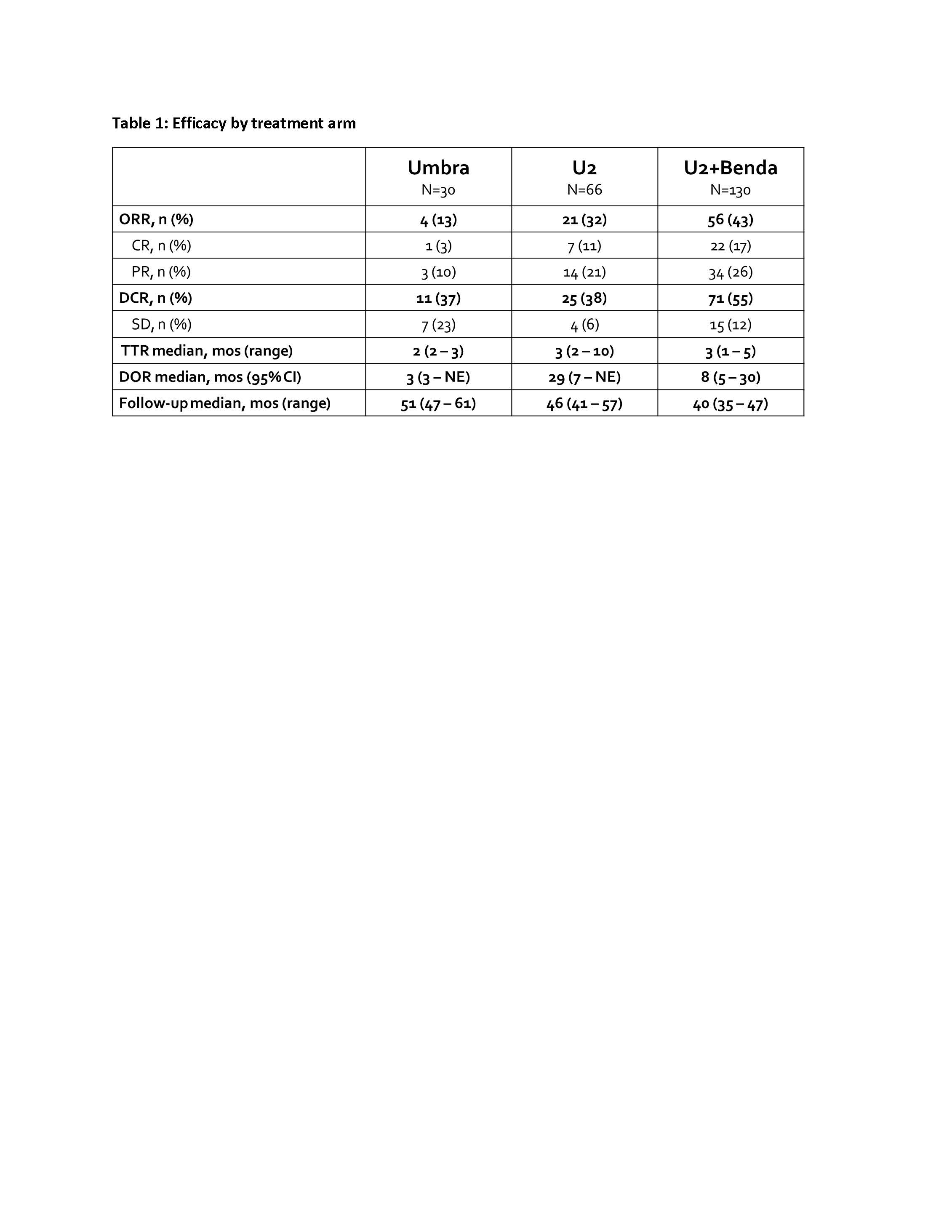