3188 The Effect of Platelets on Thrombin Generation in Cord Blood and Peripheral Neonatal Blood in the Premature Infant; The Event Study

Infants born very preterm (<32 weeks) are at increased risk of haemorrhage, particularly intraventricular haemorrhage which can result in short and long term morbidity. Routine clinical laboratory tests such as the prothrombin time and activated partial thromboplastin time are frequently abnormal in this patient group but do not appear to correlate with clinical outcomes. Moreover, while reduced levels of circulating coagulation factors and platelet hypo-reactivity have been reported, plasma thrombin generation (TG), has been reported to be similar or even enhanced in very preterm infants when compared to term infants.

In this prospective observational study, PRP and PPP was prepared by centrifugation from citrated umbilical cord blood and peripheral neonatal blood collected from premature infants (24 - 31 weeks) and healthy term controls (>37 weeks). No samples were collected from heparinised lines. Parameters of plasma thrombin generation in PRP were assessed using CAT, with thrombin generation stimulated by tissue factor only (TF; final concentration 1pM). CAT was also repeated in PPP using only TF and no exogenous PL (rendering the assay dependent upon the endogenous PL content of plasma).

In the analysis of umbilical cord blood PRP, plasma thrombin generation was accelerated in the preterm infant group with a significantly shorter time to peak TG observed. The other parameters of TG were similar in both groups (Table 1).

In the subset of infants from whom peripheral blood samples were available, there was further evidence of enhanced plasma TG in preterm PRP relative to term infants (Table 2). In this subgroup, the lag time and time to peak thrombin were significantly shorter in the preterm group and peak thrombin was significantly higher.

TG was also assessed in both PPP and PRP prepared from umbilical cord blood samples in a subgroup of infants (n=10 term, n=6 preterm) using 1pM TF only, rendering the assay dependent on the phospholipid content of plasma. No difference was observed in any CAT parameters, suggesting that neonatal PPP phospholipid content (potentially from circulating extracellular vesicles) is sufficient to support thrombin generation in the absence of exogenous phospholipid.

These preliminary data suggest that neonatal PRP, measured in both umbilical cord blood and peripheral neonatal blood, has similar thrombin generation or may even be hypercoagulable, compared with healthy term controls. Moreover, neonatal plasma phospholipid appears to support thrombin generation in the absence of exogenous phospholipid. This ongoing prospective study aims to further characterize the platelet-dependency of neonatal thrombin generation and evaluate the potential role of extracellular vesicles in neonatal haemostasis. 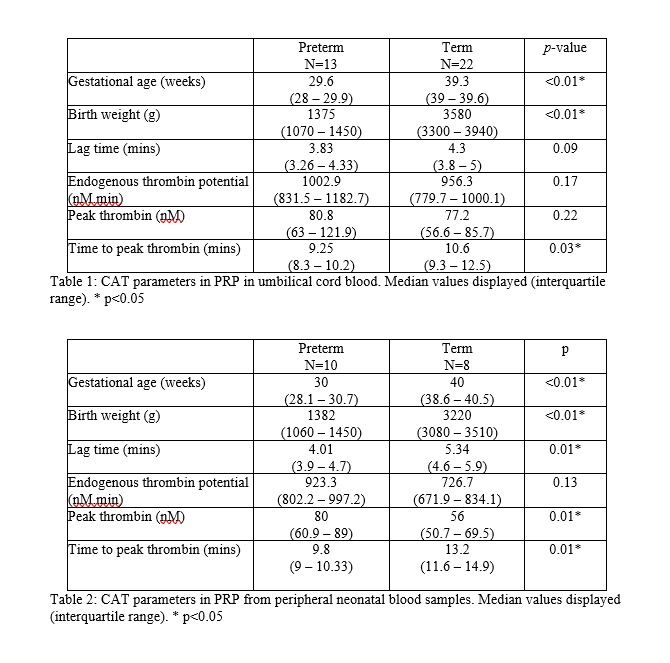