620 Salvage Therapy with Brentuximab-Vedotin and Bendamustine for Patients with Relapsed/Refractory T Cell Lymphoma. a Multicenter and Retrospective Study

Methods : This multicentric retrospective study aimed to evaluate the efficacy and the safety of the combination of BBV in patients with non-cutaneous R/R PTCL among 21 LYSA centers in France and Belgium.

The primary objective was to evaluate the best overall response rate (ORR) (complete response (CR) and partial response (PR)). Secondary objectives were progression free survival (PFS), overall survival (OS), duration of response (DoR), impact of transplantation on outcome, and safety. Patients treated between January 2013 and October 2020 were reviewed and all the data were collected through an electronic questionnaire sent to all the physicians.

Twenty-two patients (30% of patients ≤ 70 years of age) were transplanted (6 autologous and 16 allogenic). With a median follow-up of 9 months, the median PFS and OS were 8.3 and 26.3 months respectively.

Fifty-nine percent of patients experienced a grade 3 to 4 adverse event which was mainly hematologic toxicity. Treatment had to be stopped in 11% of patients.

To the best of our knowledge, this is the first study reporting on the combination of BBV in the treatment of R/R PTCL in such a large cohort.

The results are very encouraging with a high response rate, long DoR in responding patients and a very good outcome. Furthermore, patients in CR who are eligible for transplant have the best outcome, making this combination a good candidate as salvage therapy before transplant consolidation in these high-risk lymphomas with limited treatment options. 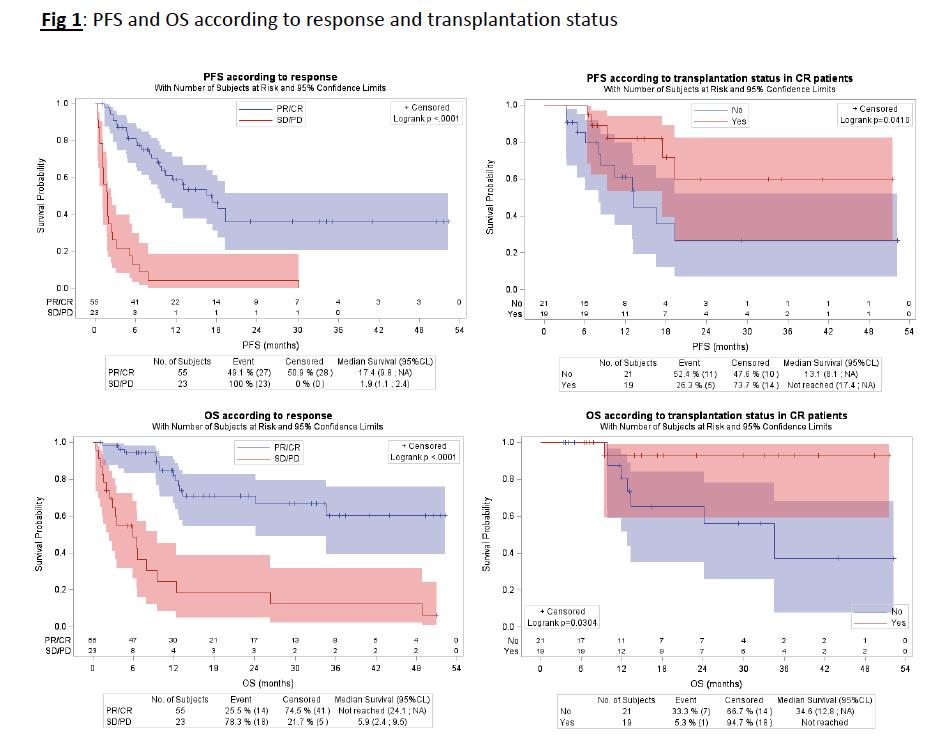