775 Identification of Patients with Unprovoked Venous Thromboembolism and a Low Risk of Recurrence Estimated By the Vienna Prediction Model: A Prospective Cohort Management Study

Methods: The study was performed between January 2013 and May 2021 at two tertiary Austrian hospitals. Patients >18 years with a first symptomatic DVT of the leg and/or symptomatic PE were eligible. The diagnosis of VTE was established by compression ultrasonography (CUS), spiral computed tomography, or lung scanning. We excluded patients with previous VTE, VTE provoked by a temporary risk factor including surgery, trauma, pregnancy, immobilisation, or female hormone intake, with cancer, OAC duration longer than 7 months or OAC for reasons other than VTE. OAC was discontinued 3 to 7 months after VTE diagnosis. D-Dimer was measured by a quantitative assay 3 weeks later and the probability of recurrence was estimated by the VPM. In patients with <180 risk points (corresponding to a predicted one-year recurrence risk of <4.4%), OAC was not resumed. CUS of both legs was performed at the time of discontinuation of OAC for reference baseline imaging in case of suspected recurrence. Patients were seen after 3, 12 and 24 months or at recurrence. Patients with a high recurrence risk (>180 VPM risk points) were excluded and their management was left to the discretion of their local practitioner. The main outcome measure was independently adjudicated recurrence of symptomatic DVT of the leg and/or symptomatic PE.

The study was approved by the local ethics committees and all patients gave written informed consent.

Baseline characteristics of patients were described by median and interquartile range (IQR) or by absolute frequency and percentage. The cumulative risk of recurrent VTE after discontinuation of OAC was estimated using the Kaplan-Meier method. Recurrence risk was also predicted with the VPM for each patient, and predictions were averaged over the study group.

Conclusion: The VPM identifies patients with unprovoked VTE at low risk of recurrence. Applying the VPM refines risk stratification which could facilitate treatment decisions on the duration of OAC for patients and physicians. The model was well calibrated at one year. The apparent underestimation of the recurrence risk at two years could be countered by recalibration. 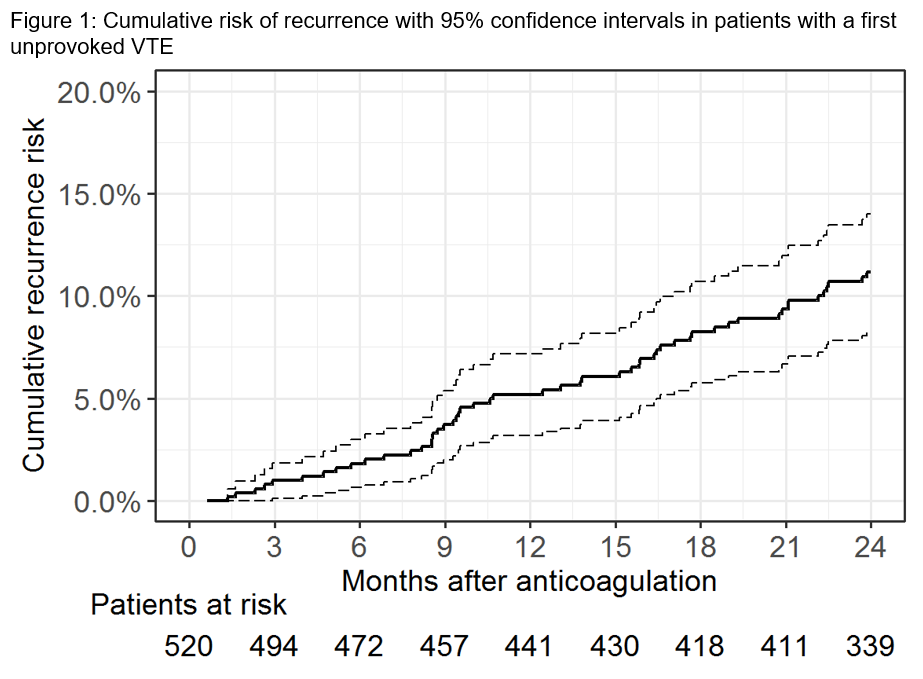