Plasma cell disorders (PCD) are clonal outgrowths of pre-malignant or malignant plasma cells (PC), characterized by extensive chromosomal aberrations. Centrosome aberrations (CA) were identified to be a major driver of chromosomal instability in cancer. However, their origin, incidence, and composition in patient-derived tumor cells is only poorly understood. Moreover, while most studies on CA in primary tissues rely on immunostaining against centrosomal proteins at low resolution, systematic analysis of structural aberrations on an ultrastructural level is lacking. Here, we use a multi-modality approach integrating high-throughput volume electron microscopy (EM) and immunofluorescence (IF) imaging, expression profiling, and clinical data to enhance our understanding of CA evolution in primary cancer cells, using the PCD spectrum as a paradigm for malignant progression.

Consenting patients enrolled in the study were either healthy donors or diagnosed with PCD (monoclonal gammopathy of undetermined significance (MGUS), smoldering myeloma (SM), overt multiple myeloma (MM), or plasma cell leukemia (PL)) or other B-cell malignancies (B-cell acute lymphoblastic leukemia (B-ALL) and B-cell chronic lymphocytic leukemia (B-CLL)). Bone marrow aspirates (except B-ALL/B-CLL) were sorted for CD138+ PCs and prepared for both IF and electron tomography (ET) assessment. For ET, slot grids were loaded with 5 consecutive, 200 nm thick sections of epoxy resin-embedded cells. High-throughput screening by transmission EM was performed on the central section to identify cells containing centrosomes (Schorb et al., Nature Methods 2019). Serial-section ET was performed after semi-automated targeting of centrosomes on adjacent sections. Tomograms were reconstructed to produce volumes of at least 1 µm in Z for each centrosome. At least 30 completely featured centrioles were evaluated per case. An online repository of all acquired ET data will be made publicly available for interactive visualization upon conclusion of the study. For IF-based analysis, cells were fixed and stained for nuclei and the centrosomal proteins centrin and pericentrin.

EM screening of 42,876 cells yielded 1873 completely featured centrioles in 1297 CD138+ PCs from 21 PCD patients and eight healthy donors. Both ET and IF revealed no increased frequency of supernumerary centrosomes in normal and primary patient PCs as compared to healthy cells of B-lymphatic origin. In contrast, ET revealed frequent centriole over-elongation over 500 nm, structural aberrations, and decoration of centrioles with supernumerary appendages (Fig. 1). Unexpectedly, in healthy individuals, centriole over-elongation was most pronounced and increased with age to a maximum of 75.0 % of cells. In PCD, over-elongation decreased in frequency from the early disease stages MGUS and SM, via overt MM to PL, where it was fully absent. Similarly, the amount of additional structural aberrations correlated with centriole length and decreased from healthy donors via MGUS, SM, and MM to PL, where they were absent as well. In line with these findings, gene expression profiling revealed significantly elevated mRNA levels of centriole elongation activators in healthy CD138+ PCs as compared to malignant PCs from MGUS and MM. MM patients with > 20 % over-elongated centrioles showed significantly better progression-free (p<0.001) and overall survival (p<0.001; PFS and OS, respectively) as compared to those with fewer over-elongated centrioles. Interestingly, neither numerical nor structural CA were detected in B-ALL or B-CLL samples. 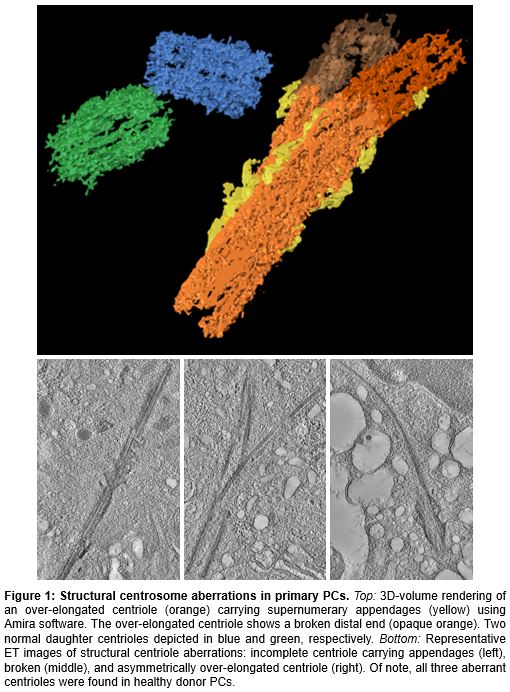