To overcome the limitations of ISA and determine the onset of HSC contribution we performed high-density sampling for ISA in nonhuman primates (NHPs) transplanted with gene-modified HSCs. In the first month of hematopoietic recovery weekly blood samples were taken to enhance data density and increase the reliablity to detect clones with low abundance. Animals were followed up to 5 years to confirm that identified HSC clones persist long-term. Finally, clonal tracking data from the NHPs was used to inform a simulation of hematopoietic reconstitution, determine the temporal involvement of HSCs, and refine the phases of hematopoietic recovery after myeloablation and HSC transplantation.

In contrast to the current biphasic model, contribution of multipotent HSCs clones was detected in the very first blood samples taken 2 to 3 weeks post-transplant during neutrophil recovery. HSC clones found in these early time points persisted long-term throughout the entire follow-up and were detected in bone marrow CD34+ cells 4 years later. Most surprisingly, multipotent HSCs became the dominant source for mature blood cells in the peripheral blood as early as 50 days post-transplant. To understand the observed kinetics of HSC contribution and change in clonal diversity in our dataset, we simulated the clonal outgrowth and differentiation of multipotent clones. Simulations predicted that hematopoietic recovery is primarily HSC driven and HSC contribution follows a stochastic pattern. Finally, to confirm that HSCs proliferation and differentiation is a stochastic process, in vitro experiments in colony-forming cell (CFC) assays were carried out. As predicted, the decision of individual HSCs to either grow into a larger pool or differentiate and get lost followed the same kinetics as observed in vivo.

Here, we show evidence that long-term persisting multipotent HSCs actively contribute during early hematopoietic reconstitution after myeloablation and HSC transplantation. Enhanced sampling showed that multipotent HSCs produce neutrophils during recovery and become the predominant source of mature blood cells as early as 50 days post-transplant. Most importantly, observed changes in the clonal diversity during early recovery suggest a stochastic engraftment of HSCs rather than a bi-phasic reconstitution initially driven by short-term progenitors. These findings should have important implications for the design of ex vivo and in vivo HSC gene therapy and genome editing approaches. 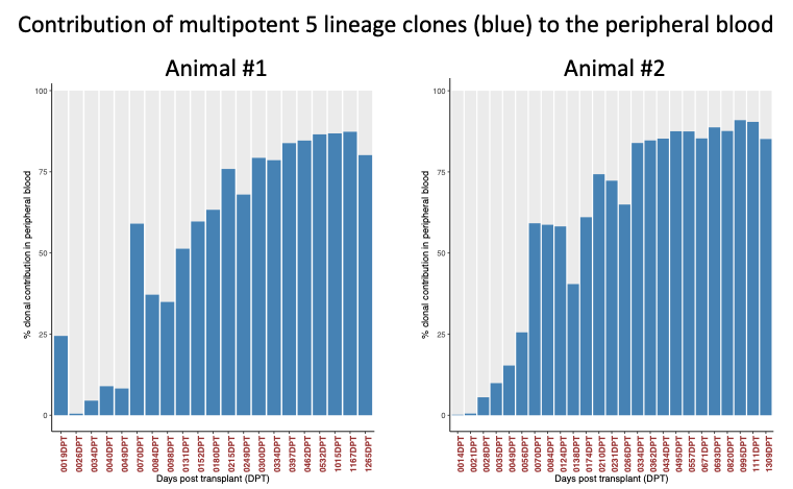