Background: Diffuse large B-cell lymphoma (DLBCL) is frequently curable after frontline therapy, however, relapses can occur after achievement of a PET-negative complete remission (CR). Early detection of relapse may be associated with improved outcomes, particularly given the development of more active therapies for relapsed, refractory DLBCL. Controversy exists regarding the utility of post-therapy surveillance imaging which is associated with patient (pt) anxiety, radiation exposure, false-positive results, and cost, without clear overall survival benefit in retrospective studies (Thompson JCO 2014). A retrospective study found that serial minimal residual disease (MRD) monitoring during DLBCL surveillance could identify pts at risk of relapse before clinical evidence of disease (Roschewski Lancet Oncol 2015). In this multicenter prospective study, we assessed whether a next-generation immunosequencing (IS) MRD assay could be used for early detection of molecular relapse in DLBCL.

Methods: Eligible pts with DLBCL or high-grade B-cell lymphoma (HGBCL) who received anthracycline-containing chemotherapy were enrolled across five cancer centers. In pts who achieved a PET-negative CR, serial peripheral blood samples were obtained every 3 months (mos) and CT scans every 6 mos for 2 years (yrs) post-treatment. The IS MRD assay (Adaptive Biotechnologies, Seattle, WA) that leverages multiplex PCR followed by NGS to identify and track rearrangements of IgH, V-J, D-J and IgK/L loci and translocations in Bcl1/2-IgH was used. MRD positive was defined as any detectable rearrangement and MRD undetectable as no evidence of rearrangement.

Among the 400 evaluable pts, 44 relapses have occurred as of July 1, 2021. In 45% of pts (20/44), clinical relapse was detected using surveillance imaging alone (typically CT CAP with IV contrast) in an otherwise asymptomatic pt with a normal physical exam and laboratory evaluation. In 10% of pts (4/44), relapse was detected by patient-reported clinical symptoms alone. In 45% of pts (20/44), relapse was detected by imaging, clinical symptoms, and/or evaluation by an oncologist. With a median follow-up of 34 months, the 2-year PFS was 88.9% (85.8, 92.1). Advanced age, advanced stage, and poor-risk R-IPI were associated with inferior PFS.

Of the 44 relapses, tumor-specific clonotypes were identified in 39 pts (4 failed quality control (QC), 1 failed calibration) and 38 pts had ≥1 sample available within 90 days of relapse. Of 356 patients in ongoing CR, tumor-specific clonotypes were identified in 279 patients (29 failed QC, 33 failed calibration, and 15 are pending sequencing). The patient-level prospective MRD results are shown in Figure 1. The overall sensitivity, specificity, positive predictive value, and negative predictive value of the IS MRD assay was 63% (24/38), 78% (218/279), 28% (24/85), and 94% (218/232), respectively. Plasma MRD detection had improved sensitivity and specificity compared with circulating cells. Among the 24 relapsed patients with a positive MRD result at or before relapse, the median anticipation of the test was 3 months (range 0 to 24 months).

Conclusion: Overall outcomes are excellent for DLBCL and HGBCL pts who achieve PET-negative CR. In this multicenter prospective analysis with standardized follow up, a substantial proportion (45%) of clinical relapses are detected radiographically in asymptomatic pts, supporting the value of CT surveillance imaging in DLBCL, particularly for pts with advanced stage or high-risk disease. MRD assessment using the IS MRD assay had suboptimal sensitivity and specificity in the post-treatment surveillance setting in DLBCL. Further study of the clinical context and its correlation with test performance is ongoing. 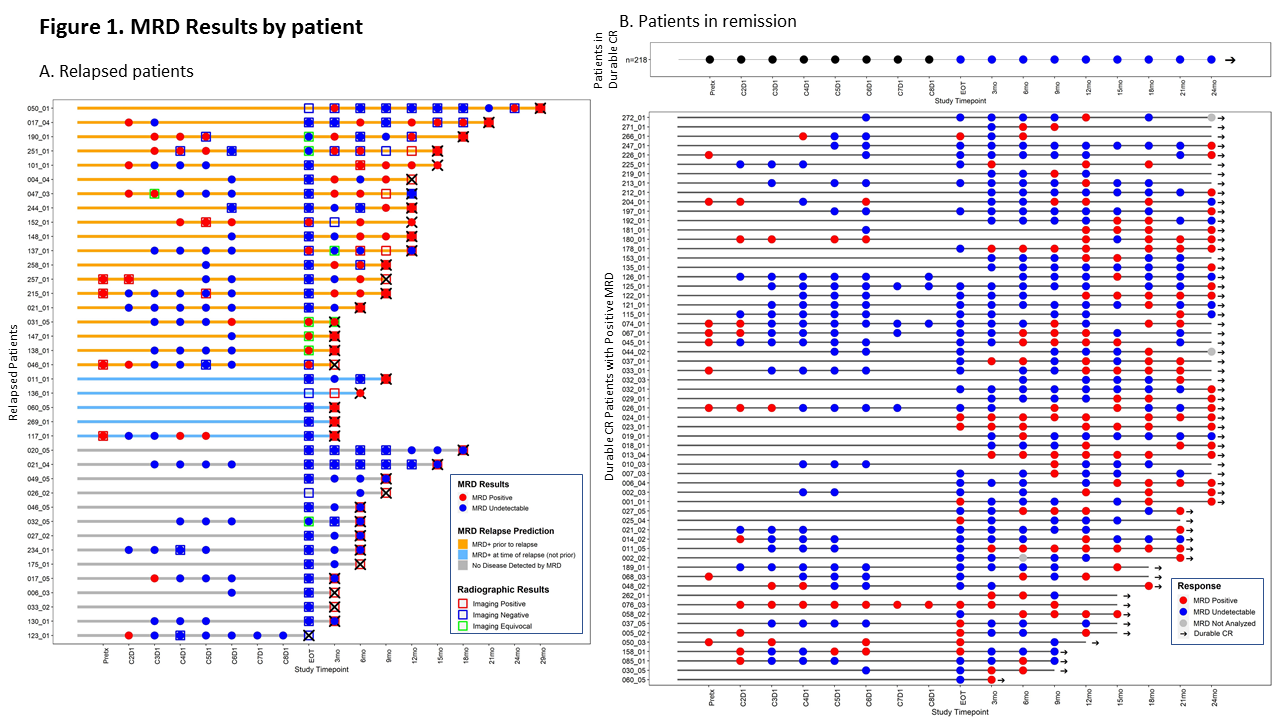