882 Lymphoma during Pregnancy: A Multicentre Study By the Australasian Lymphoma Alliance

Lymphoma complicates approximately 1/6000 pregnancies (Pereg, Haematologica 2007), and presents challenges for the patient, her family, and medical professionals. This rare event raises unique therapeutic, social and ethical issues, with the welfare of both mother and unborn child to consider. There are challenges regarding symptom obfuscation, diagnosis delays and treatment delivery. In this retrospective study, we aimed to describe the experience, treatment patterns and outcomes of lymphoma in pregnancy in Australia and New Zealand.

We identified patients aged ≥18 diagnosed with lymphoma in pregnancy between 1 January 2009 and 31 December 2020 , across 11 institutions in Australia and New Zealand. We defined “lymphoma in pregnancy” as diagnoses occurring during pregnancy (antenatal cases) or the first 12 months after delivery (postpartum cases). Postpartum cases were included to account for the phenomenon of diagnostic delay during gestation due to deferral of diagnostic investigations and symptom obfuscation (de Haan, Lancet Oncol 2018). Overall survival was calculated by Kaplan-Meier methods from the date of diagnosis to death, with patients alive and lost to follow-up censored on the last day of follow-up.

We identified 63 patients, 34 diagnosed antepartum and 29 diagnosed postpartum (Table 1). The most common diagnoses were classical Hodgkin lymphoma (HL) (35), followed by diffuse large B cell lymphoma (11) and primary mediastinal B cell lymphoma (6). The median age was 32 (range 23-42) years. Women diagnosed antepartum were more likely to be nulliparous (p=0.004). Of the postpartum cases, symptoms of malignancy first appeared during pregnancy in 24%.

At diagnosis, 44% had advanced stage disease. 60% of women had PET as part of baseline staging, however only 8% underwent PET whilst pregnant, all during the second or third trimester. 83% of HL patients had adverse risk factors (mediastinal bulk >1/3 diameter, ESR>50mm/hr, >2 sites). ESR alone, which may be elevated physiologically in pregnancy, was the sole adverse risk factor for 9% of HL patients.

Median days between diagnosis and treatment initiation were 14 (IQR 8-30) for antenatal patients and 21 (IQR 7-40) for postnatal. 19% of the antenatal cohort with aggressive lymphoma had treatment deferred/delayed explicitly due to pregnancy. The majority (89%) of antenatal patients were treated with ABVD (HL) or (R)CHOP/(R)EPOCH (NHL) whilst pregnant. 3 patients received first-line treatment divergent from standard (vinblastine for HL, interferon for indolent B-NHL and surgery for primary cutaneous ALCL). 37% received radiotherapy, although only 1 patient received it antenatally.

Discussion of elective termination of pregnancy was documented in 24 of 34 antenatal diagnoses, advised in 3 and performed in 2, both in the first trimester. Only 31 (49%) of 63 women had documented evidence of counselling regarding future fertility strategies.

Of the 48 patients with available data, there were 45 live births, 2 elective terminations and 1 spontaneous abortion in the first trimester. The mean gestation at birth was significantly earlier and marginally preterm for antenatal diagnoses (mean 35.6wk v 38.2wk, p=0.002). 6 neonates (11%) were small for gestational age, 5 of whom were born to mothers diagnosed antenatally. 29% of neonates were admitted to neonatal intensive care or special care units. There were no cases of neonatal neutropenia, one case of sepsis of prematurity and one case of PJP infection in a term baby.

Lymphoma in pregnancy is rare and lacks a harmonised approach. We present a large multicentre cohort reflecting contemporary practice. Although standard therapy could be provided to most patients, delays in treatment and diagnosis were common, and most antenatally-diagnosed women did not receive optimal staging. Neonates in the antenatally-diagnosed group were more likely to be premature, however there are likely a number of confounders and causality cannot be presumed. There were no neonatal deaths. It is imperative to continue to report on data regarding lymphoma in pregnancy to inform optimal care in this setting. 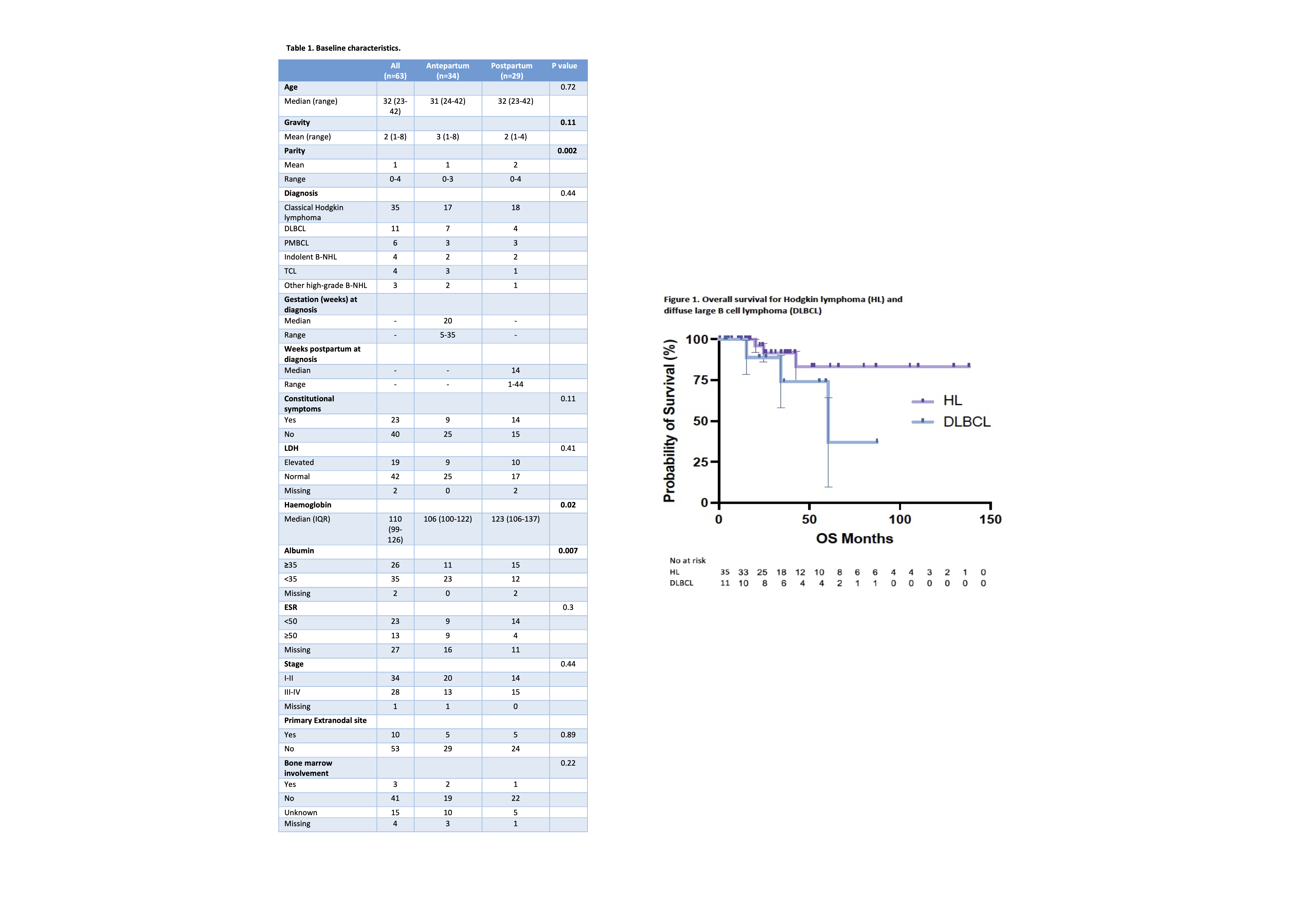