760 Proof of Mechanism Studies with Bitopertin, a Selective Glycine Transporter 1 Inhibitor Under Development for the Treatment of Erythropoietic Protoporphyria (EPP) and X-Linked Protoporphyria (XLPP)

Bitopertin is a selective and orally available inhibitor of glycine transporter 1 (GlyT1), which supplies glycine for the initial step of heme biosynthesis. Bitopertin has been evaluated in several Phase 2 and Phase 3 clinical trials (>4,000 patients) and has demonstrated a favorable safety profile. During the conduct of these studies, it was observed that bitopertin modulates the heme synthesis pathway. Bitopertin is being developed by Disc Medicine as the first potentially disease modifying therapy for erythropoietic protoporphyria (EPP) and X-linked protoporphyria (XLPP), two rare genetic disorders of heme biosynthesis. EPP is caused by a partial deficiency of the enzyme ferrochelatase (FECH), the last enzyme in the heme biosynthesis pathway that incorporates iron into protoporphyrin IX (PPIX). In EPP patients, a loss of >65% of FECH activity results in accumulation of PPIX, which leads to painful cutaneous photosensitivity with erythema and edema and hepatobiliary injury. In XLPP, mutations in the C-terminal domain of 5'-Aminolevulinate Synthase 2 (ALAS2), the first enzyme in heme production, result in a gain of function leading to elevated 5-aminilevulinic acid (5-ALA) production, leading to PPIX accumulation.

In K562 cells, we performed CRISPR-Cas9 genome editing to knock down one FECH allele and introduce the FECH c.315-48C hypomorphic variant of the EPP genotype in trans. For CD34+ cells, knock down (>60% reduction) of FECH mRNA was achieved with lentiviral vectors expressing shRNA of FECH. Both cellular models exhibited greater than 50-fold increase in PPIX levels, as measured by flow cytometry and liquid chromatography with tandem mass spectrometry (LC-MS/MS). In the K562 EPP model, bitopertin and several other GlyT1 inhibitors decreased the formation of 5-aminolevulinic acid (5-ALA), prevented PPIX accumulation in a dose-dependent manner (Fig. 1A) and without affecting heme formation (Fig. 1B). The bitopertin EC50 ranges from 3 to 10 nM, comparable with the literature reported IC50 value in a 3H-glycine uptake assay. In contrast, Org 25543, a selective GlyT2 inhibitor, at up to 10 µM did not affect 5-ALA and PPIX levels. Importantly, bitopertin did not affect cell viability and cell number. In the CD34+ EPP model, bitopertin also prevented PPIX accumulation in a dose-dependent manner, with an EC50 of 32 nM and maximum reduction of 80% as measured by LC-MS/MS. Importantly, bitopertin did not negatively impact erythroid surface markers CD71 and CD235a. As observed in K562 EPP model, GlyT2 inhibitor Org 25543 did not impact PPIX level, indicating that GlyT2 may not play a role in the heme biosynthesis pathway in these cells.

The efficacy of bitopertin to treat EPP was further evaluated in female Fechm1Pas EPP and male Alas2Q548X/Y XLPP mouse models. The recessive Fechm1Pas allele is an ethylnitrosourea (ENU)-induced missense mutation that retains approximately 5% residual ferrochelatase activity. The Alas2Q548X animals were generated by employing CRISPR-Cas9 editing technology to introduce a known human gain-of-function mutation. Overall, the Fechm1Pas/Fechm1Pas homozygous mice and Alas2Q548X/Y develop protoporphyria characterized by elevated RBC and liver PPIX levels. Fechm1Pas and Alas2Q548X mice were fed with diet containing 0 or 100 ppm bitopertin for 8 weeks starting at 6 weeks of age. At 8 weeks, PPIX levels had decreased in Fechm1Pas and Alas2Q548X animals receiving bitopertin with a mean reduction of 45% (Fig. 2A) and 73% (Fig. 3A), respectively, compared to the control group. Importantly, no changes in hemoglobin levels were observed (Fig. 2B and 3B), indicating bitopertin can reduce PPIX accumulation without significant impact on erythropoiesis at the current dosing regimen.

Here we demonstrate that by inhibiting glycine uptake into erythrocyte precursors, bitopertin can limit heme precursor production and attenuate PPIX accumulation without causing anemia, given the large baseline excess of PPIX in EPP and XLPP. Our proof-of mechanism studies in in vitro and in vivo models of protoporphyria demonstrate that bitopertin has the potential to improve light tolerance and hepatobiliary injury in patients by decreasing PPIX in erythrocytes; clinical trials are planned. 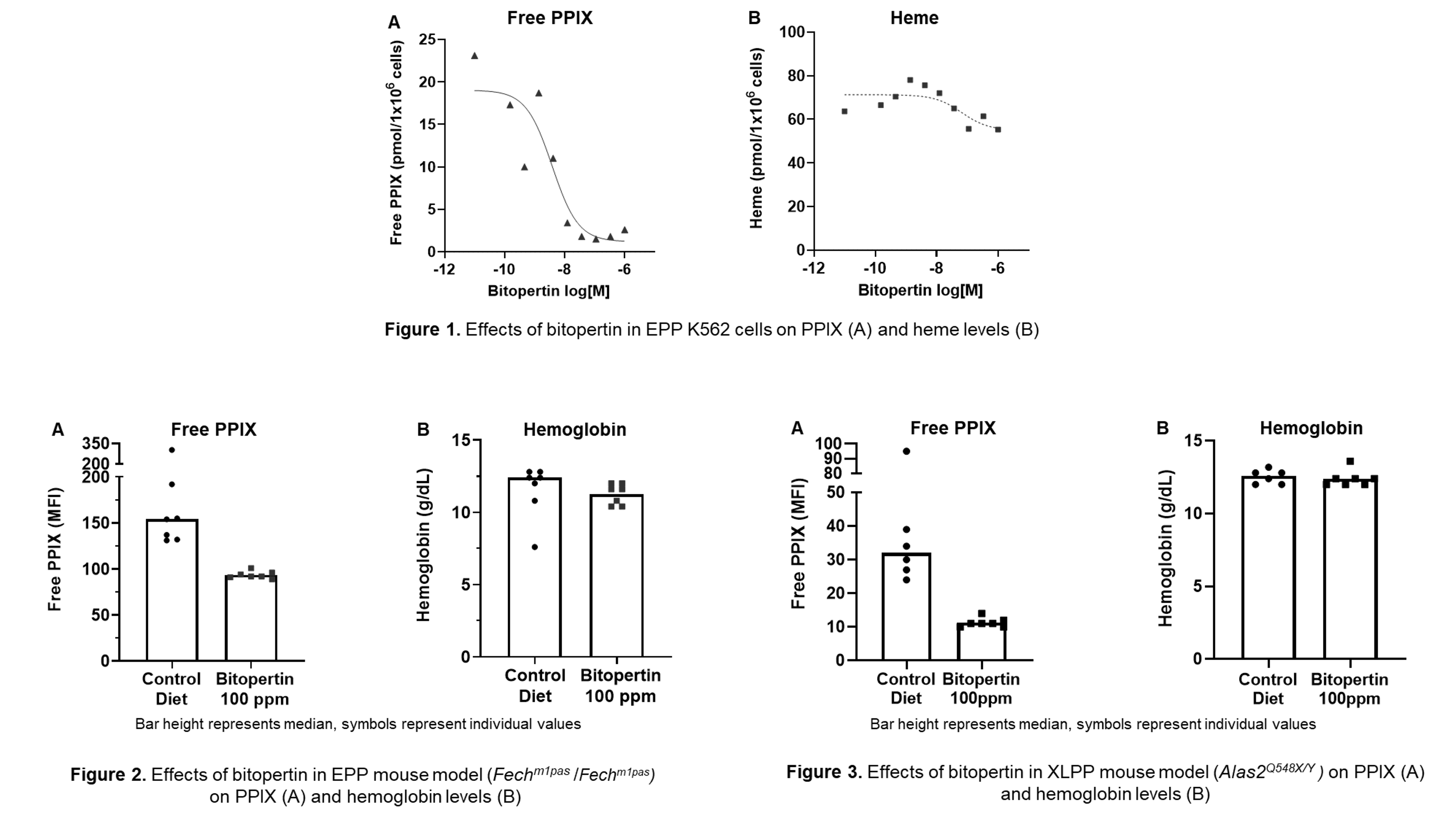 See more of: 102. Iron Homeostasis and Biology: Disorders of Iron and Heme and Novel Treatments
See more of: Oral and Poster Abstracts
<< Previous Abstract | Next Abstract >>
*signifies non-member of ASH