585 Surveillance Program of Romiplostim Use Connected to Pregnancy

Immune thrombocytopenia (ITP), defined as an isolated low platelet count (<100 × 109/L), occurs in approximately 1 in 1000 to 10,000 pregnancies in the United States and is the most common cause of severe thrombocytopenia (platelet count <50 × 109/L) detected in the first and second trimesters. Treatment for ITP during pregnancy is limited by the lack of safety evidence for the fetus/infant. The Pregnancy Surveillance Program (PSP) was conducted to collect safety information on pregnancy and fetal outcomes of women exposed to the thrombopoietin receptor agonist romiplostim before conception, during pregnancy, or immediately postpartum. Here, we report pregnancy and birth outcomes as well as adverse events (AEs) for mother and fetus/infant.

Pregnancy outcomes data from women of 25 different countries were collected from August 1, 2017–March 15, 2020. Authorization to obtain pregnancy and infant health information as well as follow up with healthcare professionals was obtained from the mothers. One follow-up attempt was made if the mother was unresponsive, and two follow-up attempts were made 6–8 weeks after the mother’s estimated date of delivery. Additional follow-ups were conducted when the infant was 6 and 12 months of age. Romiplostim pregnancy exposure cases reported during the data-collection period were entered into the PSP database and reported to global health authorities per local rules and regulations. Abnormal pregnancies were defined as those with at least one serious AE. Birth outcomes included live birth, premature birth, spontaneous abortion, elective termination, and stillbirth.

Overall, 43 (23%) women received treatment with romiplostim in the third trimester with median (Q1, Q3) exposure of 21 (7, 63) days. Of the 86 known pregnancy outcomes by trimester exposure (Figure 1), 40 (46.5%) were normal pregnancies with 15% abnormal birth outcomes, and 46 (53.5%) were abnormal pregnancies with 65.2% abnormal birth outcomes; 26 (56.5%) of the abnormal pregnancies were low platelet counts. Three cases of ectopic pregnancy were reported among women receiving romiplostim for ITP prior to conception. In all three women, romiplostim was continued up to, during, and after the ectopic pregnancy. One molar pregnancy was reported in a woman who received romiplostim for chronic ITP for approximately one year before conception. Of the 96 known birth outcomes, 57.3% were normal term, 11.5% were spontaneous abortion, 9.4% were term with complication (inguinal hernia, congenital cytomegalovirus infection, trisomy 8, and single umbilical artery), 9.4% were elective termination, and 12.4% were other outcomes (including 11 premature births, and one stillbirth). Twelve infants (including one case of twins) had thrombocytopenia at birth, of whom nine received immunoglobulins, and three received platelet transfusions. Out of the 12 infants, eight had resolution of thrombocytopenia within a week, and four (including the twins) had no available information about outcomes. No infant had defective immune system development, neoplasm, or bone marrow reticulin formation. One infant was diagnosed with fetal and neonatal alloimmune thrombocytopenia that resolved two months after birth. Among the 12 thrombocytopenic infants, six had good and six had unknown current/discharge health status.

The available data from the PSP suggested that the risk of adverse birth outcomes was low regardless of the timing of exposure. Additionally, no substantial safety concerns were identified for the mothers, fetuses, and infants due to romiplostim use during pregnancy. The results are complicated, however, by the abnormal pregnancies in women with severe ITP who comprised the majority of cases where romiplostim was used. 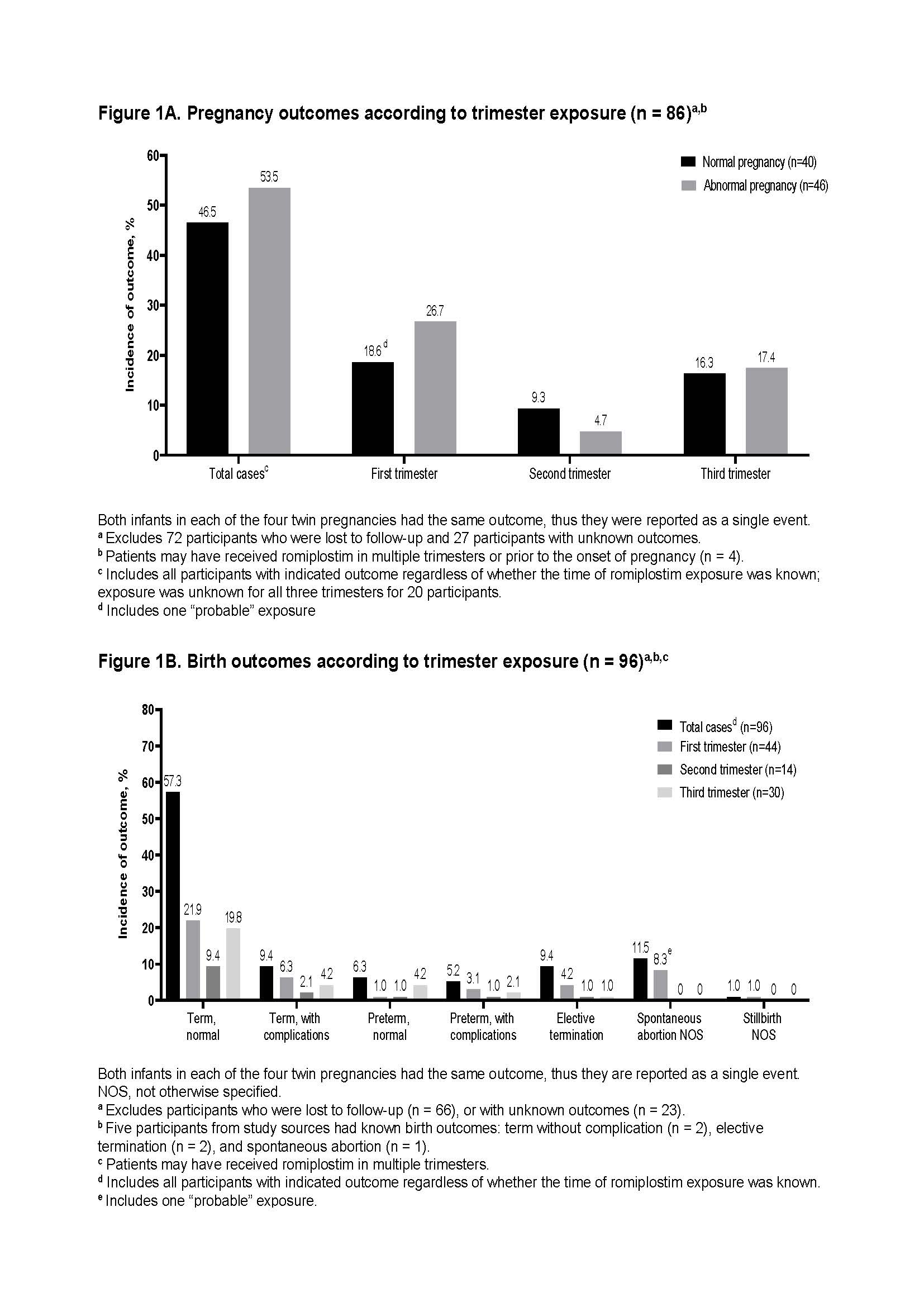 See more of: 311. Disorders of Platelet Number or Function: Clinical and Epidemiological: Thrombopoietin Receptor Agonists and Other Clinical Topics in Thrombocytopenia
See more of: Oral and Poster Abstracts
<< Previous Abstract | Next Abstract >>
*signifies non-member of ASH