Introduction: Cytogenetics remains one of the most important prognostic factors in acute myeloid leukemia (AML) patients, even for outcomes after allogeneic hematopoietic cell transplantation (allo-HCT). Complex karyotype (CK) constitutes a cytogenetic category with a very adverse prognosis in this setting. However, CK is a heterogenous and loosely defined category which comprises a high diversity of cytogenetic subtypes, which is highly enriched with specific cytogenetic subtypes characterized by losses of chromosomal material at critical regions known to confer a poor prognosis per se, such as monosomal karyotype, del(7q)/-7, del(5q)/-5 or abnormalities leading to 17p region loss. On the contrary, rare AML cases characterized with only multiple numerical abnormalities known as pure hyperdiploid karyotype (HDK), have a controversial prognosis. We hypothesized that pure complex HDK AML has a distinct and much better prognosis after allo-HCT compared to non-HDK, CK AML.

Methods: We selected from the EBMT registry adult patients with AML and a full cytogenetic report. HDK was defined by the presence of 49 chromosomes or more. Patients were then stratified by pure HDK (pHDK) and HDK with other cytogenetic abnormalities (HDK+), characterized by HDK and the presence of a prognostic-defining cytogenetic abnormality such as del(5q)/-5, del(7q)/-7, del(17p)/-17/i(17q), inv(3q21-26)/t(3;3)(q21;q26) or t(9;22). We included only first allo-HCT from a sibling or unrelated donor (UD) performed between 2000 and 2018.

Conclusions: AML with pHDK has a better outcome after allo-HCT in terms of RI, LFS, OS and GRFS. pHDK AML constitutes probably a distinct cytogenetic entity from HDK+ or other non-hyperdiploid CK AML. CK remains a strong indication for allo-HCT, but the type of abnormalities included in CK significantly influences the outcome and should guide how to manage patients after allo-HCT in terms of immunosuppression withdrawal or prophylactic/preemptive post-transplant interventions such as use of hypomethylating agents or donor lymphocyte infusions. 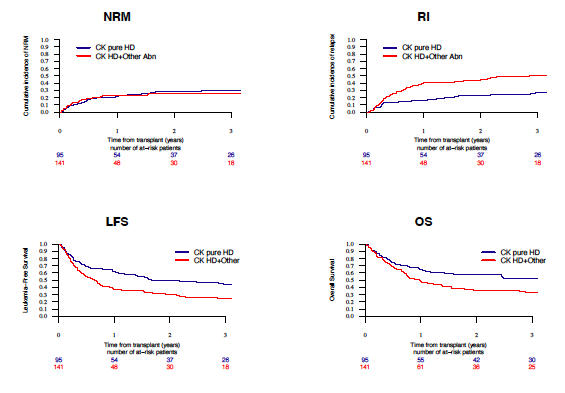