4 Efficacy and Safety of Fitusiran Prophylaxis, an siRNA Therapeutic, in a Multicenter Phase 3 Study (ATLAS-INH) in People with Hemophilia A or B, with Inhibitors (PwHI)

Hemophilia A and B are rare bleeding disorders characterized by ineffective clot formation due to impaired thrombin generation as a result of deficiency of FVIII or FIX, respectively. Fitusiran is a subcutaneously (SC) administered investigational siRNA therapeutic targeting antithrombin to restore thrombin generation and rebalance hemostasis in people with hemophilia A or B, with or without inhibitors. Here, we present the safety and efficacy of fitusiran prophylaxis for PwHI in a phase 3 study (ATLAS-INH; NCT03417102).

The ATLAS-INH study is a randomized, open-label Phase 3 study designed to evaluate the efficacy and safety of fitusiran in PwHI. Eligible males ≥12 years receiving on-demand treatment with bypassing agents (BPA) were randomized in a 2:1 ratio to receive once monthly 80 mg SC fitusiran prophylaxis or continue with on-demand BPA. The primary endpoint is annualized bleeding rate (ABR) in PwHI on fitusiran prophylaxis compared to those on BPA on-demand in the efficacy period. The secondary endpoints include spontaneous ABR, joint ABR, and quality of life (QoL) measured by Haem-A-QoL.

57 subjects were randomized into the study. Mean (range) age of the study participants at screening was 28.4 (13-63) yrs. Statistical significance was achieved for primary and all secondary endpoints with significant reduction in ABRs of treated bleeds: all, spontaneous and joint bleeds for fitusiran vs on-demand BPA arm (Table 1). A total of 25 patients in fitusiran arm (65.8%) had zero treated bleeding events. Efficacy of fitusiran prophylaxis treatment was seen in both hemophilia A and hemophilia B patients with inhibitors. Statistical significance was also achieved for improvement in physical health domain score, with a difference (95% CI) of -28.72 (-39.07 to -18.37, p-value <0.0001) as well as overall HRQoL and between fitusiran and on-demand BPA arms.

This Phase 3 study demonstrated the efficacy of the 80 mg monthly subcutaneous prophylaxis dose of fitusiran in people with hemophilia A or B with inhibitors. Specifically, fitusiran significantly reduced bleeding with a median ABR of zero and significant proportion of people with zero bleeds, resulting in a meaningful improvement in health-related quality of life. Reported TESAEs were generally consistent with what is anticipated in an adult and adolescent population with severe hemophilia A or B with inhibitors, or with the previously identified risks of fitusiran. A revised fitusiran dosing regimen with reduced dose and dose frequency is currently being evaluated in ongoing clinical studies. 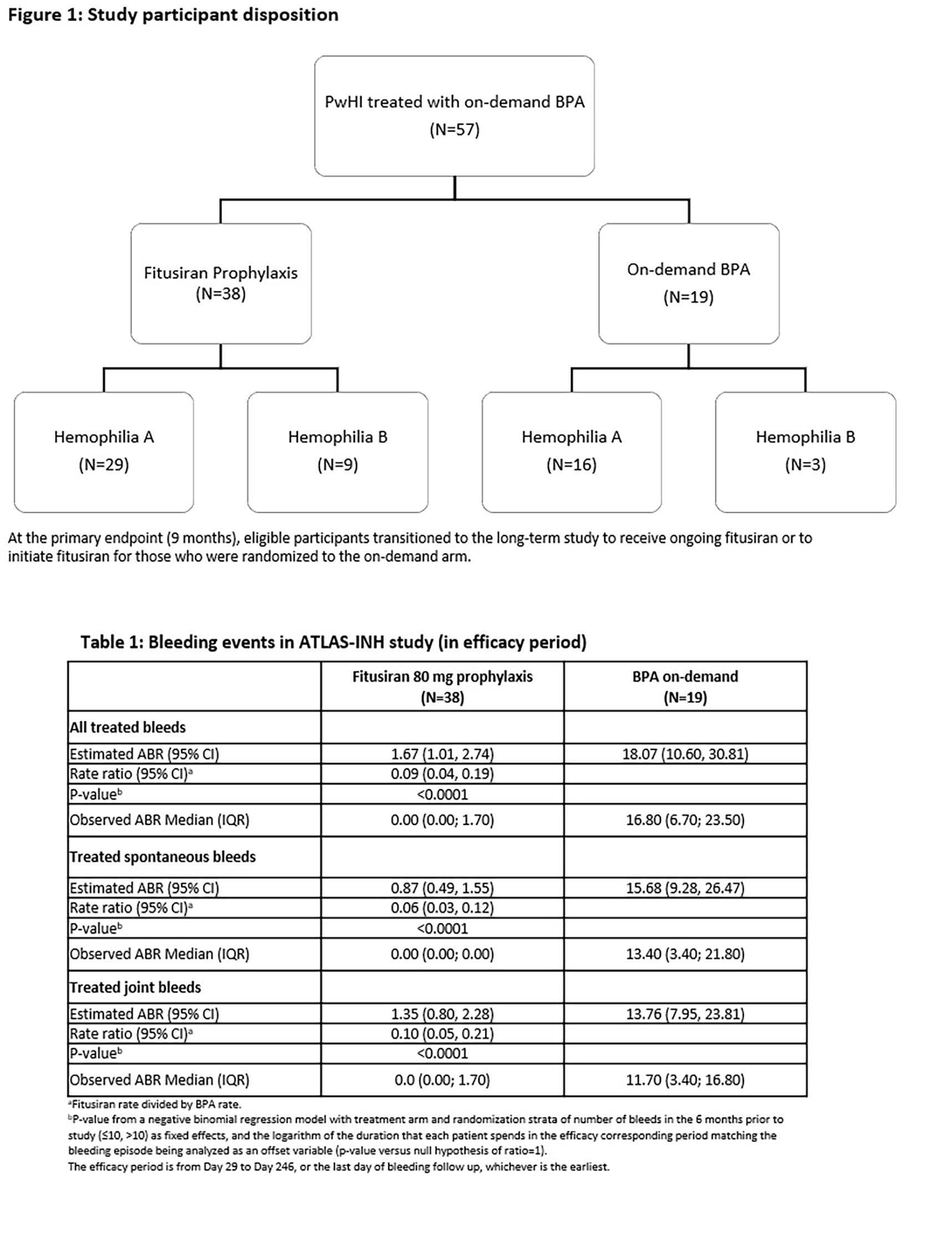