51 Mental Health Among Patients with Non-Hodgkin Lymphoma: A Danish Nationwide Study of Psychotropic Drug Use in 7,201 Patients and 36,005 Matched Comparators

Introduction: A cancer diagnosis is associated with profound psychological distress that potentially can lead to mental health problems such as depression and anxiety. Non-Hodgkin lymphomas (NHLs) are a heterogenous group of indolent and aggressive cancer diseases with high variability in treatment selections and patient outcomes. Some patients are chronically ill with recurrent need for mild chemotherapy whereas others face immediately life-threatening, yet curable disease. To gain valuable insights into the psychological distress associated with NHLs, the present study investigated the incident psychotropic drug (PD – antidepressants, anxiolytics, and antipsychotics) use, contact patterns to psychiatric departments, and intentional self-harm (including suicide) in Danish NHL patients relative to sex- and age matched individuals from the background population.

Methods: The study was carried out as a nationwide population-based matched cohort study based on prospectively collected data from several Danish registries. All adult NHL patients (≥18 years) diagnosed between 2005 and 2015 were identified in the Danish Lymphoma Registry and included if they had not been treated with any kind of PD within the last 10 years prior to date of NHL diagnosis (index date). NHL patients were matched on age and sex with five random comparators from the Danish background population on the index date. Comparators had to be alive and without PD use 10 years prior to the index date. Incident PD use was defined as first redeemed prescription of PD after index date. Prescriptions were captured in the National Prescription Registry and described by cumulative incidences using the Aalen-Johansen estimator with death and NHL relapse as competing risk. Contacts with psychiatric departments and registration of intentional self-harm or completed suicide were captured in the Danish National Patient Registry. Patients were subcategorized according to type of lymphoma (Table 1).

Conclusion: This study suggests that NHL patients have a significantly higher risk of mental health problems compared to the Danish background population, (when) using PD prescriptions as a proxy measure. The risk of intentional self-harm and completed suicide was also higher, but numerical differences were very small. Overall, the results emphasize the need for directing clinical attention on mental health in newly diagnosed NHL patients and screening for relevant symptoms during follow-up to provide best possible support to patients suffering from anxiety and depression. 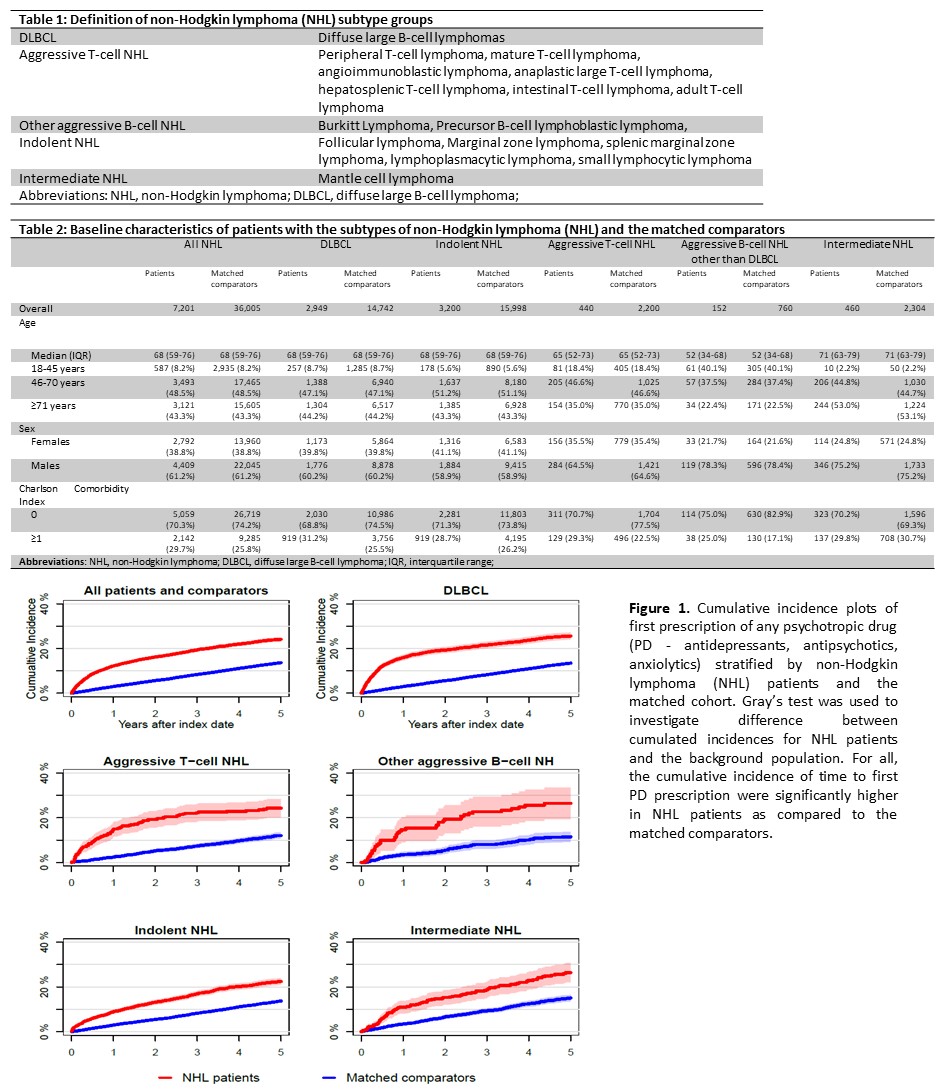