IRd has been approved for the treatment of RRMM based on the results of the TOURMALINE-MM1 study, (median progression-free survival [PFS] with IRd vs placebo-Rd: 20.6 vs 14.7 months). Several retrospective and prospective observational studies have shown comparable effectiveness of IRd in ≥2nd line of therapy (LoT) in the real-world setting to that observed in the MM1 trial, with median PFS ranging from 15.6 to 27.6 months. Here we report an analysis of a large, globally representative dataset pooled from 3 observational studies to investigate the effectiveness of IRd in the overall RRMM population, by LoT, and in subpopulations of pts defined by frailty status.

INSIGHT MM is a large, prospective study which has enrolled >4200 MM pts from Europe, Asia, the US, and Latin America, with a planned follow-up of ≥2 years. UVEA-IXA is a multicenter, longitudinal cohort study of ~300 RRMM pts receiving ixazomib-based treatment via an early access program in Europe. It comprises a retrospective phase (chart review of the period from ixazomib initiation to enrolment in UVEA-IXA) followed by a 1-year prospective follow-up period. REMIX is a retrospective/prospective study of ~200 pts receiving IRd via a compassionate use program in France. The INSURE pooled analysis included adult pts with ≥2 prior MM therapy lines, and who had received IRd in ≥2nd LoT. PFS was a primary outcome measure; secondary outcome measures included duration of treatment (DoT), overall response rate (ORR), time-to-next therapy (TTNT), overall survival (OS), and safety. Using the Kaplan-Meier method, time-to-event endpoints were analyzed in the overall analysis population, by LoT, and in subpopulations of pts defined by a simplified frailty score (0–1 [non-frail] vs ≥2 [frail]). Adverse events (AEs) and discontinuations/dose reductions due to AEs, were reported separately for each study.

Analyses of REMIX AEs are ongoing. In INSIGHT, 30%, 23%, and 18% of pts discontinued ixazomib, lenalidomide, and dexamethasone, respectively, due to AEs; 14%, 19%, and 12% reduced their respective treatment dosage to manage AEs. In UVEA-IXA, discontinuation rates were 17%, 15%, and 10%, respectively; 9%, 9%, and 1%, had dose reductions. The most common AEs leading to ixazomib discontinuation in INSIGHT and UVEA-IXA were thrombocytopenia (19 and 24%, respectively), diarrhea (9 and 18%), infections and infestations/infection (15% and 6%), peripheral neuropathy (7 and 12%), and fatigue in INSIGHT only (11%). Analyses of TTNT, OS, AEs associated with treatment discontinuations in REMIX, and additional analyses of the frail cohort are ongoing and will be presented.

The findings from this analysis of a large, global, pooled dataset of 566 pts show that the effectiveness of IRd in routine clinical practice is consistent with the efficacy of IRd observed in TOURMALINE-MM1 (median PFS 20.8 vs 20.6 months), with no new safety concerns. Our results suggest a benefit of treatment with IRd in earlier vs later lines, consistent with reports from previous, smaller real-world studies of IRd in RRMM pts. In addition, this analysis provides important insights on the effectiveness of IRd in frail pts, helping to increase the understanding of the achievable outcomes in this subpopulation. 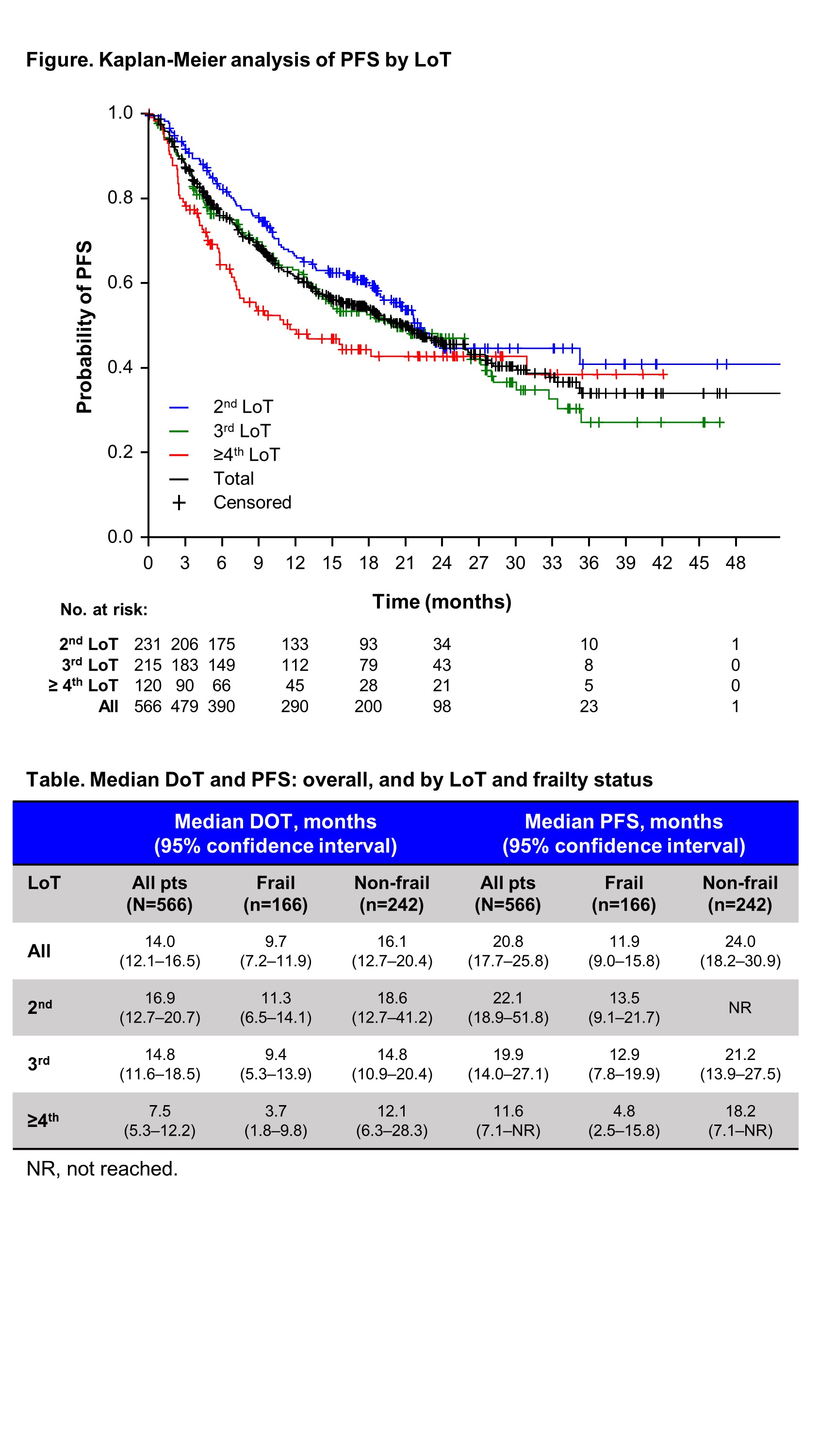