Introduction: Despite a high response rate to PD1 blockade in patients (pts) with relapsed/refractory (RR) Hodgkin lymphoma (HL), the complete response (CR) rate is low and most patients will progress. Pts who are refractory to PD1 blockade have limited treatment options and poor outcomes. Histone deacetylase inhibitors (HDACi) have immunomodulatory effects, including enhancing antigen presentation, recruiting T-cells into tumors, and promoting T-cell function. Preclinical models in melanoma and lung cancer demonstrated enhanced anti-tumor activity when HDACi were combined with PD1 blockade. We conducted a phase I study evaluating the safety and efficacy of pembrolizumab plus vorinostat, an HDACi, in pts with RR HL, diffuse large B-cell lymphoma, and follicular lymphoma. Here, we report the results of pts with RR HL.

Methods: Adult pts with RR HL who had failed at least 1 prior line of therapy and were transplant-ineligible were enrolled to receive IV pembrolizumab and oral vorinostat in 21-day cycles. Prior anti-PD1 exposure was allowed. Anti-PD1 refractory was defined as stable disease (SD) or progressive disease (PD) as best response or PD during anti-PD1 therapy after objective response. Pts were treated in a dose-escalation cohort with 2 dose levels (DL) using a Rolling 6 design and then onto an expansion cohort with treatment at the recommended phase 2 dose (RP2D). In DL1, vorinostat was administered orally at 100mg BID on days 1-5 and 8-12 and in DL2, vorinostat was administered at 200mg BID on days 1-5 and 8-12. Pembrolizumab dose was 200mg IV every 3 weeks in all DLs. Treatment could continue for a maximum of 2 years. The primary endpoint was safety and determination of the RP2D. Responses were assessed by investigators using PET-CT according to the 2014 Lugano Classification.

Conclusions: Pembrolizumab and vorinostat was tolerable and produced a high ORR and CR rate in pts with anti-PD1 naïve/sensitive RR HL. A majority of pts with anti-PD1 refractory RR HL had objective responses, including pts who had progressed while receiving PD1 blockade as their most recent therapy. 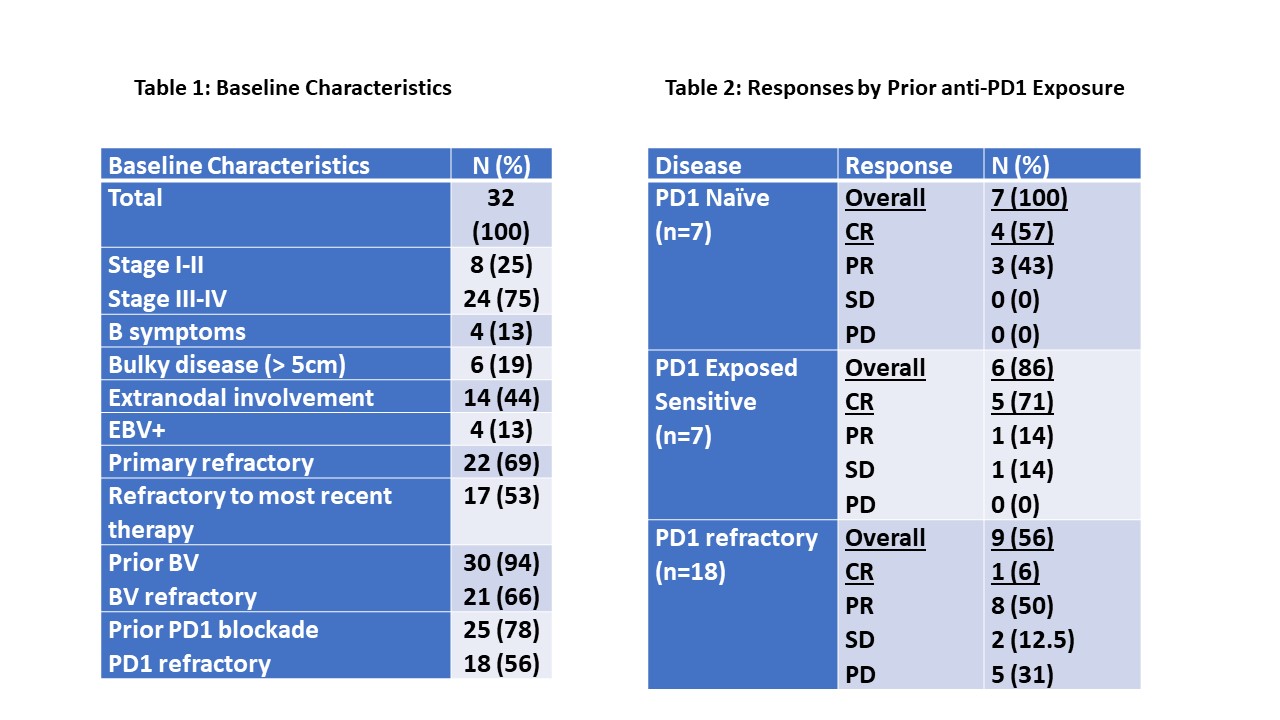 OffLabel Disclosure: Vorinostat is not FDA-approved for use in patients with Hodgkin lymphoma