529 Impact of Comorbidities on Outcomes and Toxicity in Patients Treated with CAR T-Cell Therapy for Diffuse Large B Cell Lymphoma (DLBCL): A Multicenter Rwe Study

Introduction: CAR T-cell therapy has dramatically improved outcomes for patients (pts) with relapsed/refractory (r/r) DLBCL, with some achieving durable response. Still, the majority of pts have poor outcomes with CAR-T due to progressive disease, while inherent characteristics may predispose pts to CAR-T toxicities. Tools quantifying frailty and comorbidities have not been verified in large patient cohorts. The Cumulative Illness Rating Scale (CIRS) is a comprehensive tool that has been found to predict outcomes in various B cell malignancies. Here we use a machine learning algorithm to rank the prognostic impact of specific comorbidities, as measured by CIRS, and then assess survival and toxicities in pts treated with commercially available CAR T-cell products for DLBCL.

Methods: We conducted a retrospective RWE analysis of pts with r/r DLBCL who underwent leukapheresis for CART at 9 academic centers. CIRS was assessed at the time of T-cell collection and calculated as in Salvi et al, 2008. High comorbidity burden was defined using a published cutoff of CIRS score ≥7.

Progression-free survival (PFS) and overall survival (OS) were measured from T-cell collection. Repeated subsampling and random survival forest (RSF) modeling of PFS were used to determine the most prognostic CIRS categories in the presence of covariates. Cox proportional hazards models were fit to quantify the association between survival and the following patient features: IPI at diagnosis, concurrent indolent lymphoma, age, ECOG performance status, number of prior therapies, prior transplant, number of medications, cell of origin subtype, complex karyotype, MYC rearrangement by FISH, and MYC+BCL2/BCL6 rearrangement (double-hit). Associations between comorbidities and CAR-T adverse events were evaluated with Fisher’s exact test.

Multivariable analysis showed higher ECOG (2/3 vs 1 vs 0) and 3 or more prior lines of treatment predicted shorter PFS and OS. Non-GCB subtype was related to reduced PFS but not OS, while double-hit status did not correlate with either outcome. Interestingly, CIRS ≥7 was not a significant predictor of outcomes in multivariable models. However, a severe comorbidity in any of the above four systems (denoted “Severe4”, 9% of pts) was independently associated with inferior PFS (HR=2.45, Fig 1D) and OS (HR=2.30, Fig 1E).

Conclusions: In this large RWE study, we demonstrate that CIRS is predictive of outcomes and identify a composite index comprising four CIRS organ systems (respiratory, upper GI, renal and hepatic; “Severe4”) that had prognostic significance in CAR-T recipients for r/r DLBCL. “Severe4” is predictive of severe CRS and CIRS ≥7 is predictive of severe ICANS. The underlying mechanism leading to this observation is an area of active ongoing investigation. Given these results, CIRS evaluation and “Severe4” should be considered prior to CAR-T in DLBCL. 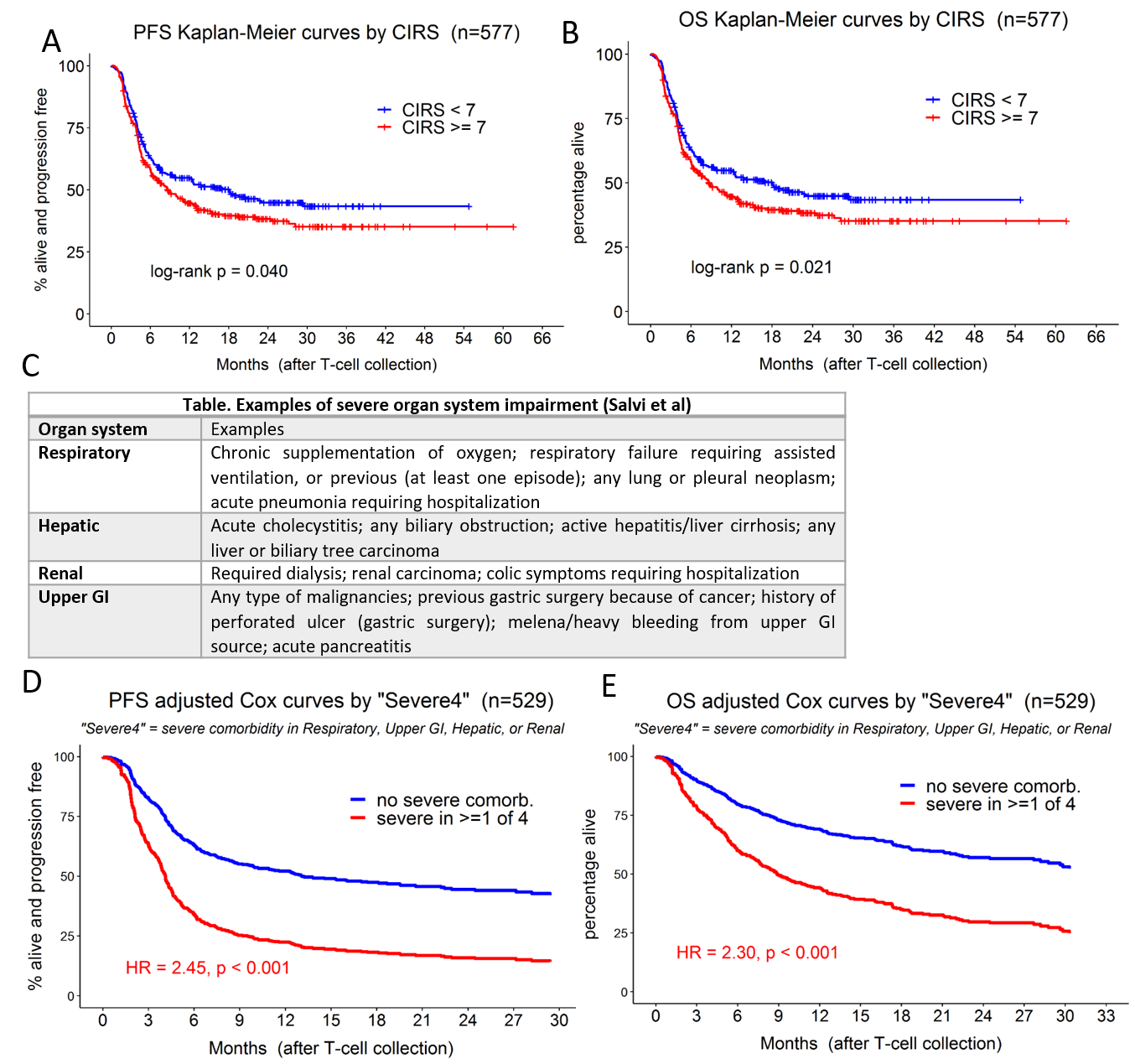