Axi-cel is a standard-of-care treatment for relapsed or refractory LBCL after 2 or more lines of systemic therapy. Some patients who would have been ineligible for ZUMA-1 criteria due to comorbidities have been treated with axi-cel in the real-world setting. We interrogated a large registry of patients treated with standard-of-care axi-cel for a definitive report on the impact of age or certain comorbidities on safety and efficacy outcomes after axi-cel infusion.

From October 2017 to August 2020, 1500 patients were enrolled in the postapproval safety observational study of axi-cel treated at 79 centers. Patients eligible for the protocol and followed up for at least 6 months with complete data entry by the time of analyses were included. One patient rescinded consent and 1 was deemed ineligible. Patients previously treated with immune effector cell therapy (n=31), with incomplete follow-up reporting (n=92), or alive but last contacted <180 days postinfusion (n=32) were excluded from analysis. Main efficacy outcomes included complete and objective response rates (CR and ORR), duration of response (DOR), progression-free and overall survival (PFS and OS). Safety endpoints of interest included cytokine release syndrome (CRS) and immune effector cell-associated neurotoxicity syndrome (ICANS). Outcomes were assessed and compared by age and preselected coexisting disease or organ impairment within 3 months prior to the infusion included in the hematopoietic cell transplantation comorbidity index. Multivariate logistic and Cox regression models were used to assess the impact of age or coexistent organ dysfunction on outcomes via odds ratio (OR) or hazard ratio (HR) and their 95% CIs.

A total of 1343 patients were included in the analysis with a median 25.1 months (range, 10.3-42.7 months) for potential follow-up, defined from infusion to data cutoff date, and a median 11.8 months (range, 0.1-38.8 months) for actual follow-up time, defined from infusion to date of death or last contact. Of these, 38% were 65 years or older (median 62 years), 4% had a performance score ≥2, 13% had cardiac comorbidities, 16% had a prior cancer, 9% were obese, 2% had moderate to severe hepatic comorbidities, and 2% had renal comorbidities. Transformed lymphoma, double or triple-hit by fluorescence in situ hybridization, prior autologous transplant and refractory disease were present in 28%, 15%, 27% and 66%, respectively. Bridging therapy was administered in 21% of patients.

Conclusion: Advanced age (≥65 years) was not associated with worse efficacy outcomes after axi-cel, despite higher rates of CRS and ICANS, which require closer monitoring. Performance status rather than age should be accounted for in patient selection and treatment decisions with axi-cel. Most coexistent organ dysfunctions have no clinically significant impact on axi-cel objective response and safety outcomes. 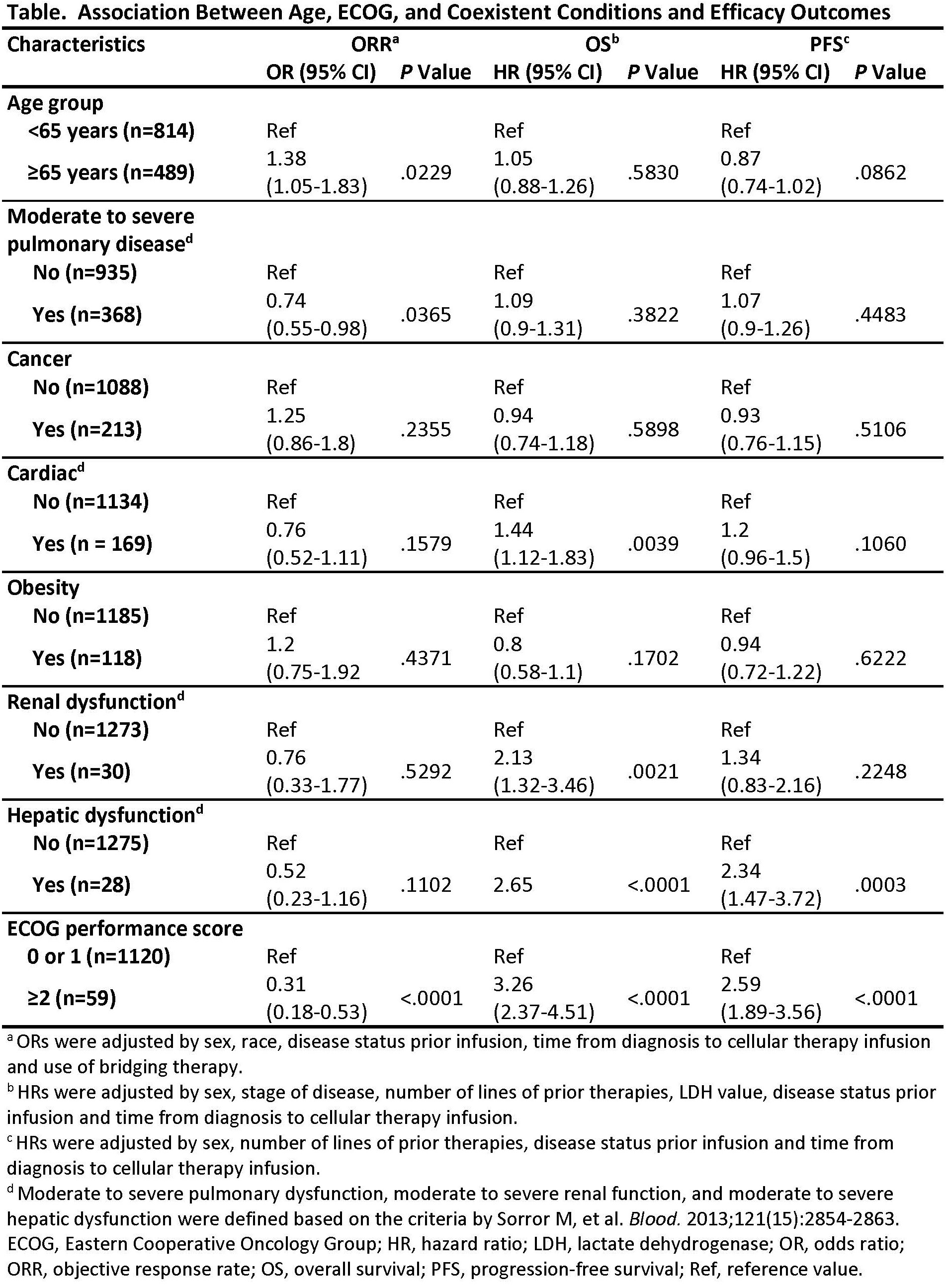