Background: Asciminib (ASC) is a novel, first in class inhibitor specifically targeting the ABL myristate pocket. Phase 3 data comparing ASC to bosutinib have shown a higher rate of major molecular (MMR; 25.5% vs 13.2%) and complete cytogenetic response (40.8% vs 24.2%) at 6 months (mo) in CML patients (pts) in chronic phase (CP) who have failed at least two lines of TKI therapy with a favorable adverse event profile. ASC is available through a compassionate use program for heavily pre-treated CML pts. We share our real-world experience for the use of ASC in CML pts from this program across Canada.

Methods: Data were collected on 22 CML pts treated with ASC from 2018 to 2021. Prior TKI history was recorded including: reason for failure to prior therapy, acquired mutations, prior cardiovascular (CV) events and outcome on ASC. BCR-ABL qPCR was performed every 3 mo at each institution. Achievement of MMR and molecular response of 2 log reduction (MR2) was assessed at 6/12 mo, and the most recent assessment. ASC dosing was also assessed at each time-point. Adverse events, resistance, and discontinuation of ASC were captured.

Pts without T315I mutation (n=18) started with a dose of 40mg bid, while pts with T315I started at either 80mg or 120mg bid, then gradually escalated aiming to 200mg bid. 4 pts discontinued the medication due to treatment failure (n=3) or grade 4 thrombocytopenia (n=1). Of those who discontinued, 2 were in AP on initiation of ASC. Side effects included myalgias (n=4), elevated lipase (n=2) and pleural/pericardial effusions (n=2). No CV events were noted in 22 pts. There was no event of disease progression to advanced disease while on ASC therapy or acquisition of new ABL1 kinase domain mutation.

The MMR and MR2 rate was lower in ponatinib pre-treated pts (n=10) compared to ponatinib naïve pts (n=12) (Table 1). The MMR and MR2 rates in pts with a T315I mutation (all 4 were ponatinib pre-treated) are at least similar or better than those without T315I. No difference in MMR or MR2 rate was noted between the 2 groups of resistance/suboptimal response vs intolerant to prior TKI therapy. In a subgroup analysis of pts with a past history of a CV event (n=17), no pt discontinued ASC due to another event after a median duration of 17 mo on ASC (range 3-34). Thus, these pts with otherwise very limited options had a reasonable response to ASC without increased risk of CV toxicity (Table 1).

Conclusion: In a Canadian real-world experience of ASC use within a compassionate access program in heavily-pretreated CML pts (many with a history of prior CV event), MMR and MR2 rates were comparable to that with ASC in the published literature. No new CV events were noted during ASC therapy in the present group of patients. 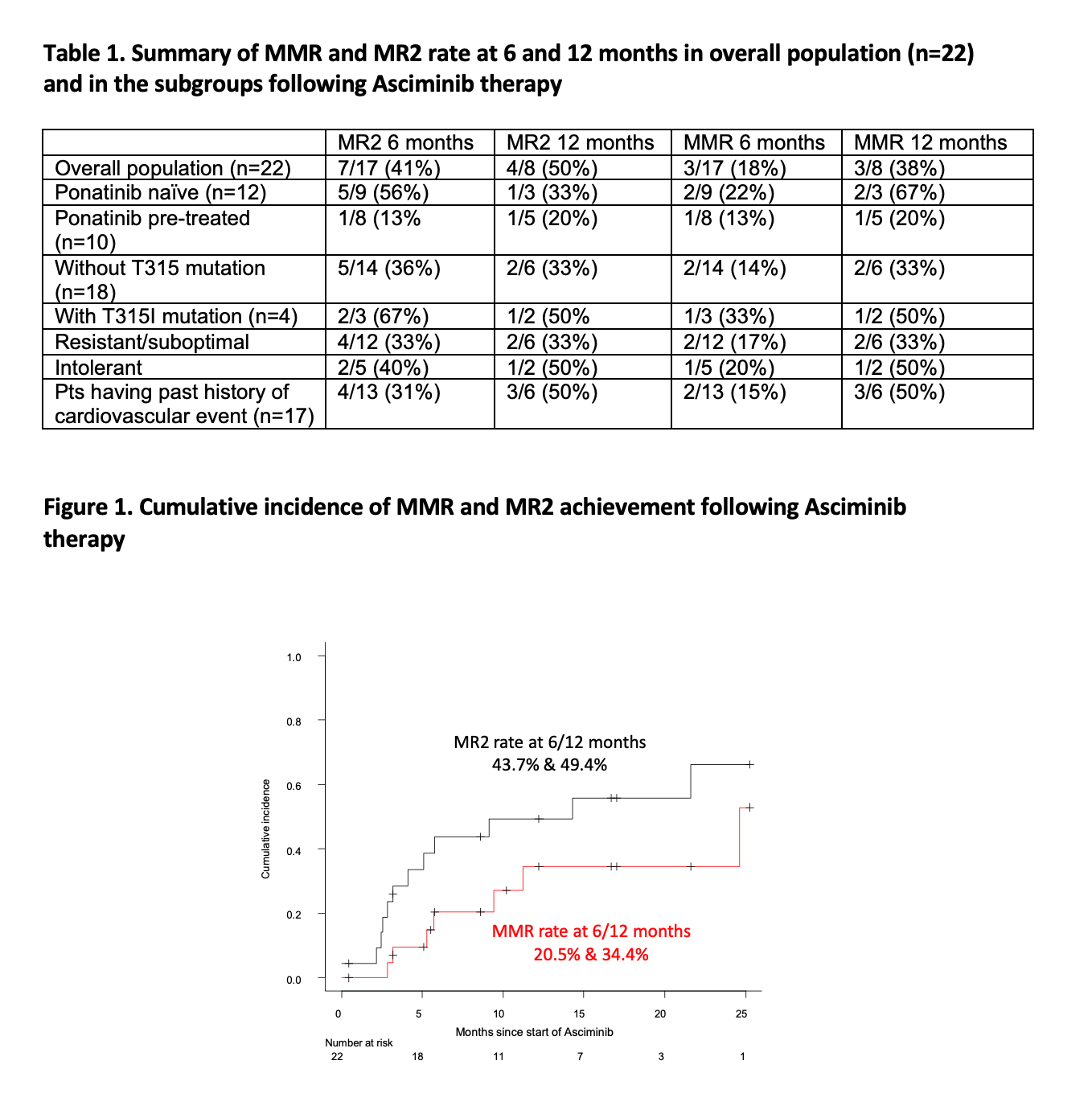