Background: Hematopoietic stem cell transplant (HSCT) is a curative option for patients with high-risk Acute Lymphoblastic Leukemia (HR-ALL), but relapse remains a major cause of treatment failure. Strategies to enhance the graft-versus-leukemia (GVL) effect have been employed to prevent relapse, including modulating immune suppression post-HSCT to hasten immune reconstitution or with the use of donor lymphocyte infusions (DLIs). However, DLIs carry a significant risk of graft-versus-host disease (GVHD) due to the concurrent transfer of alloreactive T cells. To enhance the GVL effect while minimizing GVHD, we developed a protocol for the generation of ex vivo expanded, donor-derived T-cell lines targeting PRAME, WT1 and Survivin - tumor associated antigens that are frequently expressed in both B- and T-cell ALL. These multi-antigen-targeted T cells (multiTAAs) were adoptively transferred to pediatric and adult patients with HR-ALL who had undergone an allogeneic HSCT.

Methods: Donor-derived multiTAA-specific T cells were generated by co-culturing PBMCs with autologous DCs loaded with pepmixes (15 mer peptides overlapping by 11 amino acids) spanning all 3 target antigens in the presence of a Th1-polarizing/pro-proliferative cytokine cocktail. Following 2-4 rounds of stimulation these multiTAA-specific T cells were infused to patients with ALL who had undergone an HSCT but remained at a high risk for disease relapse.

We have infused 11 HR-ALL patients (8 pediatric and 3 adult) with donor-derived multiTAA-specific T cells to prevent disease relapse (Table 1). Patients were administered with up to 4 infusions of cells at 3 escalating dose levels, ranging from 0.5 – 2x107 cells/m2. Infusions were well tolerated with no dose-limiting toxicity, GVHD, cytokine release syndrome or other adverse events. Three patients were not evaluable per study criteria as they received >0.5mg/kg of steroids (2 patients received stress doses for septic shock and 1 for elevated liver enzymes presumed to be GVHD that was later ruled out) within 4 weeks of infusion and were replaced. Six of the 8 remaining patients infused remain in CR on long-term follow up at a median of 46.5 months post-infusion (range 9-51 months). In patients who remained in long term CR we detected an expansion of tumor-reactive T cells in their peripheral blood post-infusion against both targeted (WT1, Survivin, PRAME) and non-targeted antigens (SSX2, MAGE-A4, -A1, -A2B, -C1, MART1, AFP and NYESO1) reflecting epitope and antigen spreading, which correlated temporally (within 4 weeks) with multiTAA infusions. By contrast in the two patients who relapsed we saw no evidence of in vivo T cell amplification within the first 4 weeks after infusion.

Conclusion: The preparation and infusion of donor-derived multiTAA-specific T cells to patients with B- and T-ALL post allogeneic HSCT is feasible, safe and as evidenced by in vivo tumor-directed T cell expansion and antigen spreading in patients, may contribute to disease control. This strategy may present a promising addition to current immunotherapeutic approaches for prophylaxis for leukemic relapse in HSCT recipients. 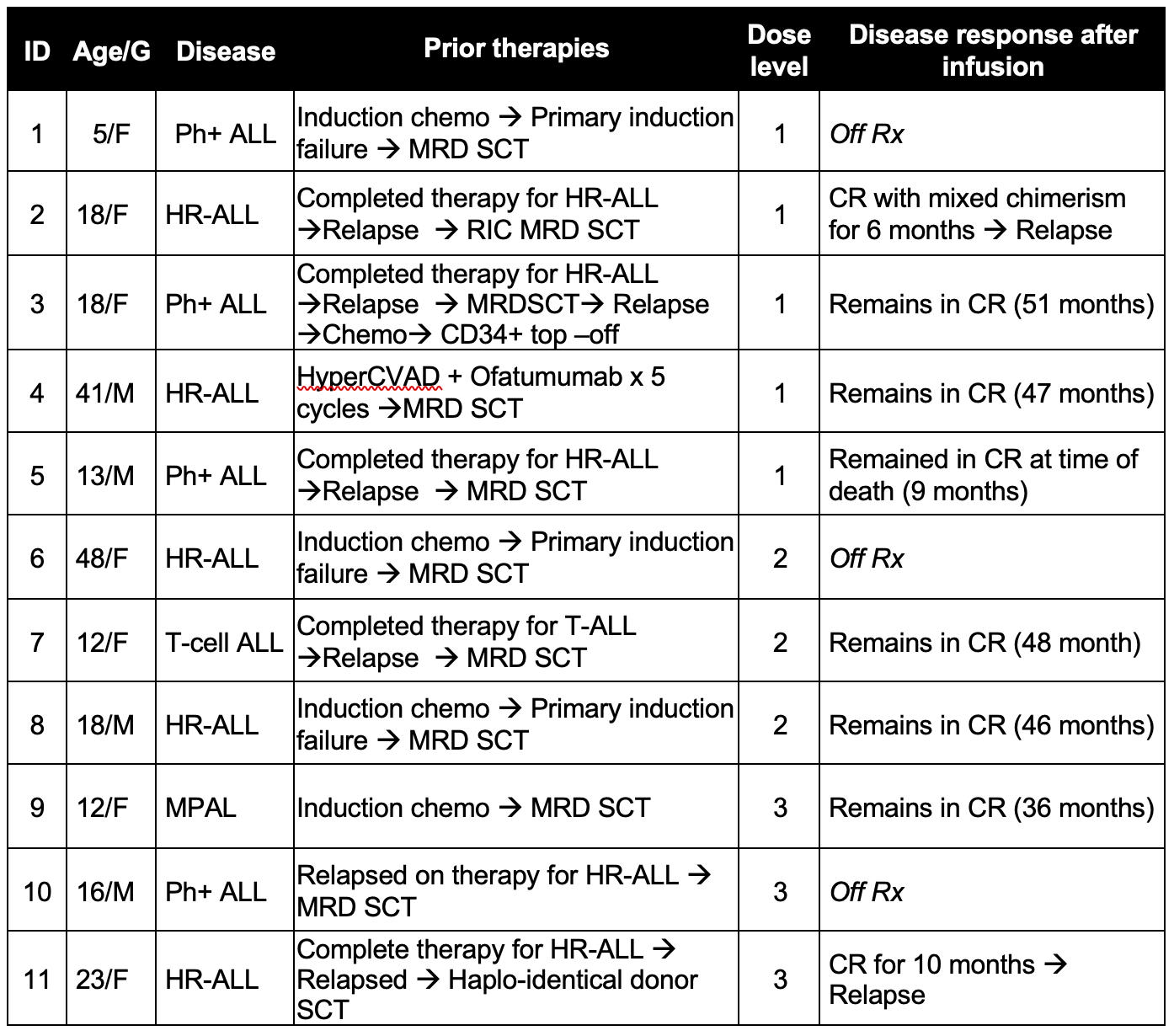