Hematopoietic stem cells (HSCs) serve as the origin of the hematopoietic system, with the ability to differentiate into all blood cell lineages and self-renewal to sustain the hematopoiesis throughout life. Hematopoietic stem cell transplantation (HSCT) currently represents the most effective therapeutic strategies to treat hematological and non-hematological diseases. However, limited numbers of HSCs or poor homing capabilities into the bone marrow are still major hurdles for successful HSCT. Moreover, graft failure and delayed reconstitution due to inefficient engraftment, remains an important complication because of the high morbidity and mortality. Although ex vivo expansion of HSCs has been well studied for decades, which displays huge potentials for clinical application, exploration of novel targets to improve HSC homing and engraftment will provide new insights to enhance HSCT efficacy.

To explore the chemical compounds enhancing the capabilities of homing and engraftment, we used CXCR4 (CD184) as the readout bio-marker, which is considered as the most essential chemokine receptor of HSPCs interacting with CXCL12 (SDF1) secreted in BM niche to support HSPCs homing, migration, proliferation and survival. We first performed chemical screening of 139 small molecules that can increase CD184 expression on cord blood (CB) CD34+ hematopoietic stem and progenitor cells (HSPCs). We concluded that treatment of CB CD34+ HSPCs for 16 hours with Lexibulin (Lex) or Vinblastine Sulfate (VS), both of which were microtubule polymerization (MP) inhibitors, could significantly promote the CD184 expression.

Next, we optimized the MP inhibitors treatment conditions including dosage, treatment duration and culture time prior to treatment. The results proved that treatment with Lex or VS for 16 hours at 1μM was the optimal conditions to significantly enhance the CD184 expression of CD34+ HPSCs and LT-HSCs (CD34+CD90+CD45RA-), while maintaining robust cell survival, when compared with the DMSO control group. Moreover, we found that only when HSPCs were under culture within two days prior to small molecules treatment, CD184 expression was significantly increased by MP inhibitors while maintaining high viability, compared with DMSO control group.

In conclusion, we demonstrated that short-term microtubule polymerization inhibition on human CB CD34+ HSPCs could not only enhance CD184 cell surface expression but also the capabilities of in vivo human HSCs homing and reconstitution via screening chemical compounds to increase CD184 expression and the following function evaluation study. Vinblastine Sulfate and Lexbulin were applied or registered as anti-cancer drugs for clinical use. Our study also indicates that MP inhibitors pretreatment of cells possesses significant translational implications, designating MP inhibitors as promising drug candidates to facilitate clinical HSCT. 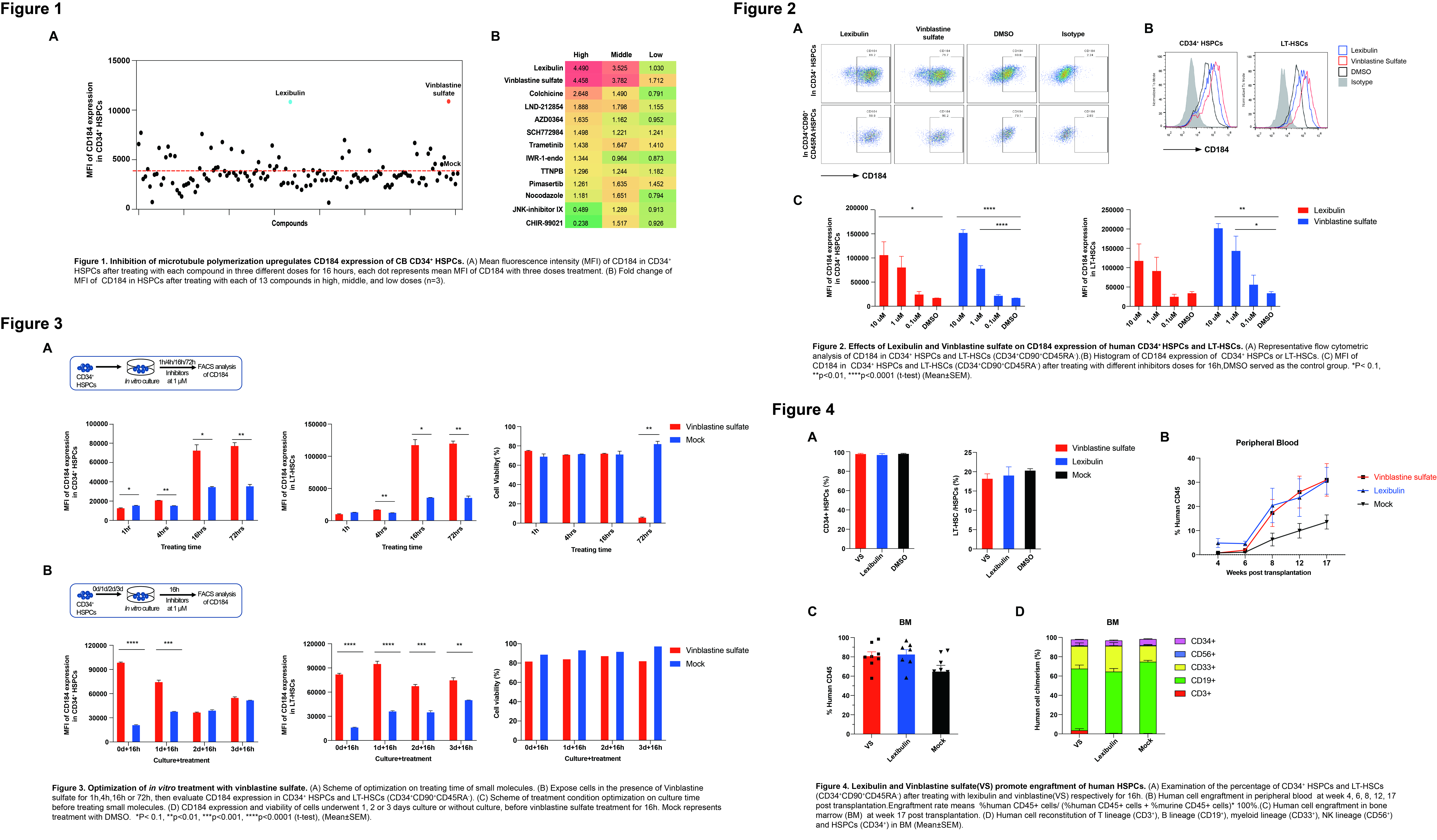