We examined CD34 transcript (RNA seq) and protein expression (flow cytometry) as well as methylation status in a cohort of 2185 adult and pediatric AML cases. We demonstrate that CD34 is silenced in a significant proportion of AML through epigenetic mechanism and correlate CD34 expression with disease characteristics, fusions, mutations, and clinical outcome.

Outcome evaluation of all patients based on CD34 expression failed to demonstrate differences in EFS or OS. However, significant variability in CD34 expression within KMT2A-r cases prompted further analysis. KMT2A-r patients with and without CD34 expression had an OS of 40% and 60%, respectively (p=0.0013, Fig. 1C). Despite the recent allocation of some KMT2A-r to high risk status based on fusion partners, the majority of KMT2A-r patients remain standard risk (SR). We examined the clinical outcome for SR KMT2A-r patients (which represents 71% of KMT2A-r). Using the same cutoffs, CD34-Neg group showed dramatically better outcomes, with 5 yr estimates of 42% vs. 24%, EFS and 67% vs. 38%, OS (p=0.0019, p<0.0001, Fig. 1D).

The observation by transcriptome was validated by multi-dimensional flow cytometry (MDF) conducted at Hematologics, Inc. CD34 expression data by MDF was available from 1613 patients enrolled on COG AAML0531 and AAML1031. CD34 expression <1200 molecules were considered negative. Of the 1613 patients with MDF, 867 patients had RNA sequencing data available. Correlation of CD34 transcript to MFI by MDF demonstrated 95% concordance. Using CD34 cutoffs by MDF, KMT2A-r patients with and without CD34 expression had an EFS of 22% vs. 37%, (p=0.0195) and an OS of 30% vs 61%, (p<0.0002, Fig. 1E). Importantly, SR KMT2A-r also demonstrated that those with CD34 expression had an OS of 36% whereas CD34-Neg patients had an OS of 64% (p<0.0001), substantiating the transcriptome data. Analyzed separately, the KMT2A-r cases in COG AAML0531 and AAML1031 demonstrated similar outcome differences for these individual SR cohorts.

Given CD34 silencing in such a large cohort of patients, we inquired the underlying mechanism of such significant silencing. We evaluated the corresponding methylation data (Illumina EPIC array) to determine whether CD34 expression may be modulated through epigenetic mechanisms. Correlation of CD34 transcript expression with CD34 promotor methylation status demonstrated significant hypermethylation of the CD34 promotor sites (Fig. 1F).

The CD34 antigen plays an important role as a marker of HSCs and LSCs, however, at least 25% of patients lack expression. CD34-Neg is markedly correlated with KMT2A-r AML and specifically enriched in fusion partners which lack risk stratifying features. CD34-Neg also exhibit significantly improved OS and EFS over CD34-expressors. These outcome observations may have dramatic and immediate implications in the clinical management of the SR KMT2A cohort. Flow based CD34 quantification may be an immediate tool used to identify KMT2A-r patients with CD34 expression; these patients may benefit from intensive or targeted therapies. 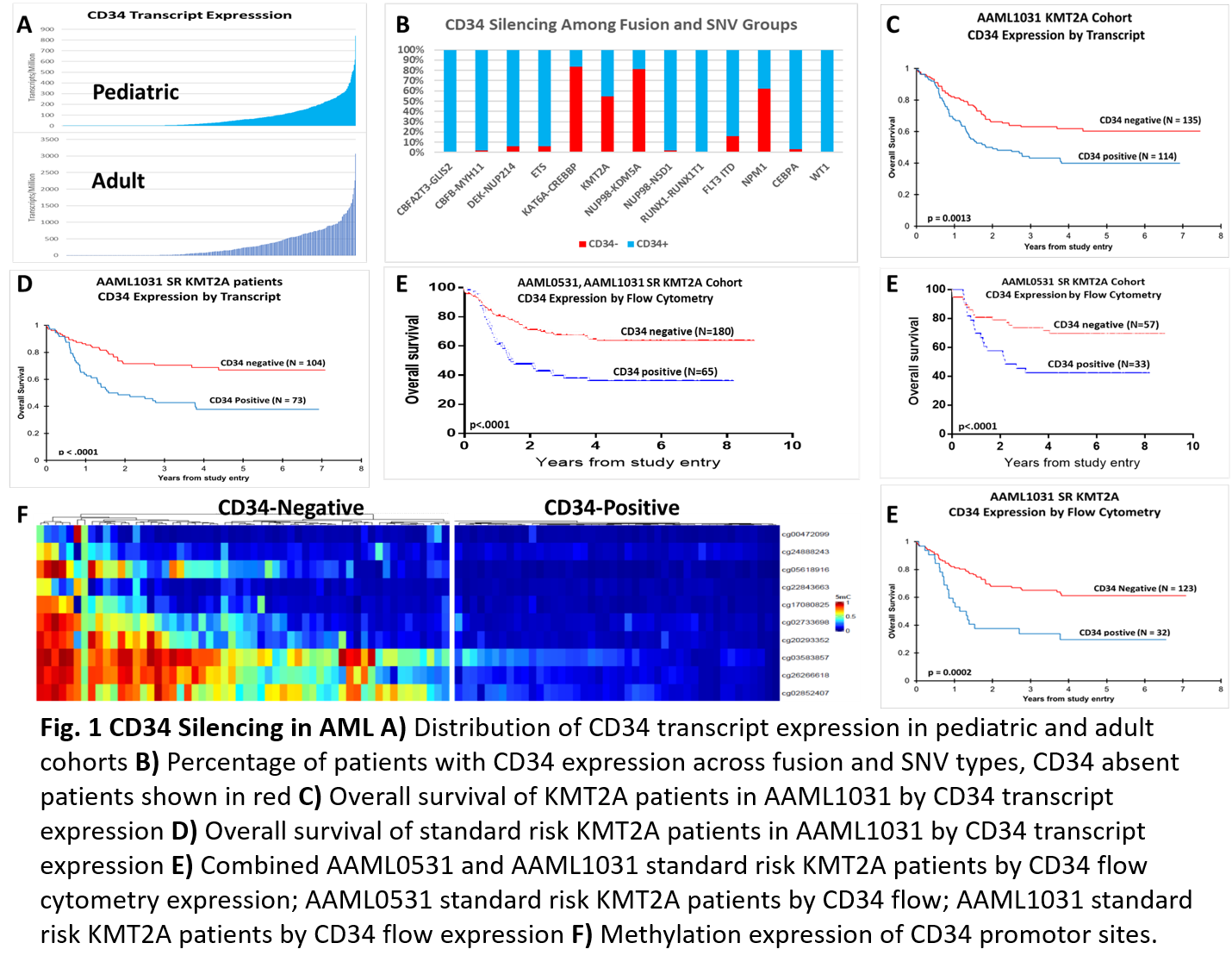