1488 Between a Rock and a Hard Place: Paraproteinemia Associated with Chronic Myeloid Leukemia

Objective: To determine whether the prevalence of paraproteinemia in a large cohort of chronic phase (CP-) CML patients is higher than expected in the general population.

Methods: We conducted a cross-sectional study among out-patient CP-CML patients treated in a tertiary medical center. Between February 2019 and May 2021 consecutive CP-CML patients who consented to the study, performed the following tests: quantitative immunoglobulin (Ig) levels, serum-free light chains (sFLC), serum protein electrophoresis (SPEP), and if abnormal also serum protein immunofixation (IFIX). The primary outcome was the prevalence of paraproteinemia among this cohort of CML patients. We conducted further analyses to evaluate whether various patient, disease and treatment-related variables are predictors of paraproteinemia within our cohort.

Results: One hundred patients, 50% males, with a median age of 63.5 (range 26-91.6) years were recruited for the study. The median time from CML diagnosis to enrollment was 6.3 (range 0.1-23.5) years. Cohort’s characteristics are depicted in table 1.
Monoclonal (M-) protein was detected on SPEP and IFIX in eight patients (8%), whose median age was 66.8 (range 46-74) years. Among them, two patients had an abnormal sFLC, elevated IgG or IgA levels, on a bone marrow biopsy over 10% monoclonal plasma cells were present, and in the absence of myeloma defining events they were diagnosed with IgG-kappa and IgA-kappa smoldering multiple myeloma (SMM), respectively. The other six patients had normal sFLC ratio and characteristics compatible with low-risk monoclonal gammopathy of undetermined significance (MGUS). Six patients with a detectable M-protein were treated with a TKI [imatinib (n=2), dasatinib (n=3), bosutinib (n=1)] and two were in treatment-free remission (TFR). All continue observation for their paraproteinemia.
None of the patients in our cohort was diagnosed with active MM. The presence of anemia was predictive of paraproteinemia, albeit with borderline statistical significance in both univariate (p=0.053) and multivariate analysis (p=0.069). Apart from anemia, no predictors for paraproteinemia were found among various other patient and disease related variables. 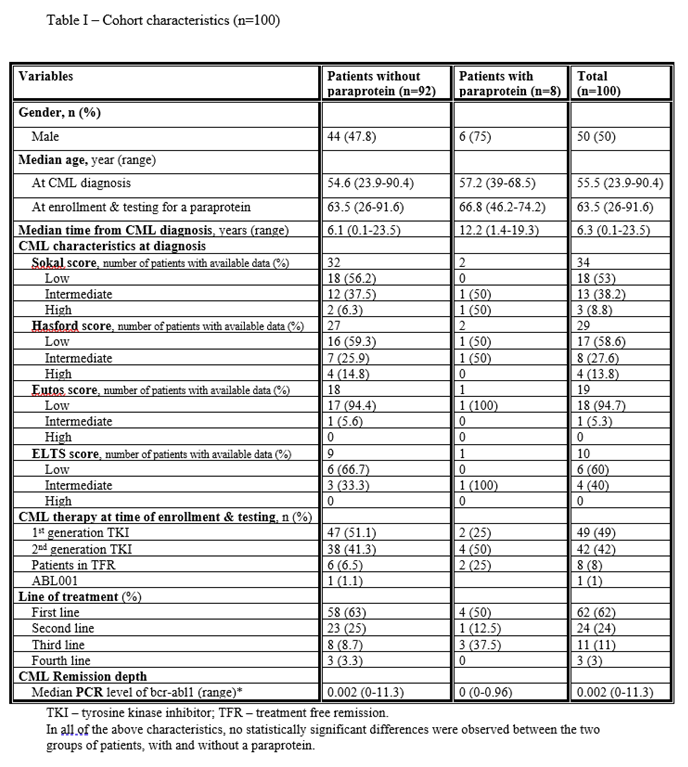